Stability of a market economy

There are two polar views about the functioning of a market economy.

According to such a belief, most of the fluctuations in the macroeconomy result from either individually optimal adjustments to changes in the environment or from improper government interventions. In such a case, the role of macroeconomic policy should be to do no harm; if policymakers hold back from actively influencing the economy, market forces would take care of the rest and foster desirable outcomes.

According to this view, macroeconomic policy is needed to help stabilise an unruly system.

Most modern macroeconomic models, such as those used by large central banks and governments, are somewhere in between these two extremes. However, they are by design much closer to the first view than the second, and this is generally not fully appreciated. In fact, most commonly used macroeconomic models have the feature that, in the absence of outside disturbances, the economy is expected to converge to a stable path. In this sense, these models are based on the premise that a decentralised economy is a stable system and that market forces, in of themselves, do not tend to produce boom and busts. The only reason why we see economic cycles in mainstream macroeconomic models is due to outside forces that perturb an otherwise stable system. We can call such a framework the stable-with-shocks view of the macroeconomy.

Stable-with-shocks view of the macroeconomy

There are many reasons why the economic profession has mostly adopted the stable-with-shocks view of macroeconomic fluctuations.

Disregarding the two world wars, although the economy fluctuated, these fluctuations were small in comparison to the growth path. In particular, when looking over such long periods, it becomes clear that the economy looks more like a globally stable system than an unstable system. 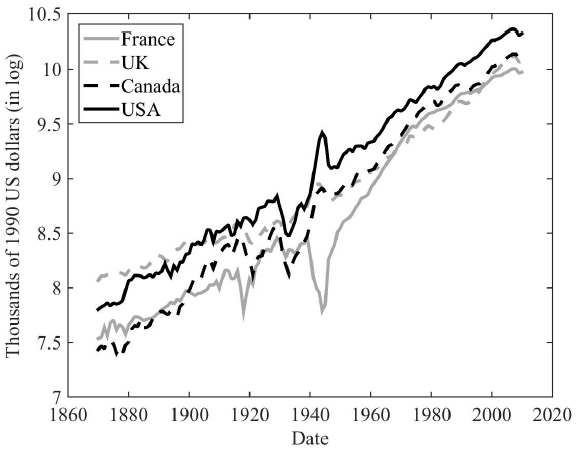 Notwithstanding these attractive features of the stable-with-shocks view of the macroeconomy, the ubiquitous and recurrent nature of cycles in most market economies, as illustrated by the fluctuations of unemployment rates (see Figure 2), strongly suggests that a market economy, by its very nature, may create recurrent boom and bust independently of outside disturbances. This idea is well captured by the statement that “a bust sows the seed of the next boom”. Although, such an idea has a long tradition in the economics literature (Kalecki 1937, Kaldor 1940, Hicks 1950, Goodwin 1951), it is not present in most modern macro-models.

In a companion paper (Beaudry et al. 2015), we have developed and explored an empirical framework that allows one to examine whether economic fluctuations may best be captured by the stable-with-shocks type framework or whether they may be better characterised as reflecting some sort of instability. To examine such an issue, one needs to depart from the preponderant convention in macroeconomics of focusing on linear models to analyse outcomes. A frequent criticism of macro-modelling, mostly from non-mainstream macroeconomists, is that the profession’s focus on linear models may have substantially biased our understanding of how the economy actually functions. As Blanchard (2014) writes, “We in the field did think of the economy as roughly linear, constantly subject to different shocks, constantly fluctuating, but naturally returning to its steady state over time.”

Within a linear set-up, a dynamic system is either stable or unstable. In contrast, in a non-linear setup, a system can be globally stable while simultaneously being locally unstable. It is this latter characteristic that has the potential to be relevant in macroeconomics given that in the long run the economy appears rather stable, while in the short run it exhibits substantial volatility. By looking at the economy through a lens that allows for the possibility of non-linear dynamics, one is de facto permitting an interpretation of the economic fluctuations where endogenous cyclical behaviour or even chaos may emerge; both features that are well known to arise in many dynamic environments. In other words, by looking at the economy using non-linear techniques we can ask whether market forces are tending to favour recurrent booms and busts, or whether they favour stability.

Our main finding is that, instead of favouring the conventional stable-with-shocks view for aggregate dynamics, our results suggest that the macroeconomy is inherently unstable and that booms and busts arise endogenously as the results of market incentives.

In fact, we found that for the US economy, market forces tend in of themselves to generate a cycle that lasts about eight years. However, these cycles are not regular or identical over time. Instead, outside forces play an important role in accelerating, amplifying, and postponing the forces that create cycles.

So what causes the economy to be unstable and exhibit business cycles? According to our analysis, this results from simple incentives that favour the coordination of behaviour across households. In particular, in a market economy where individuals face unemployment risk, households have an incentive to buy housing and durable goods at similar time. The reason for these coordinated purchases is that when others are making large purchases, this reduces unemployment; then when unemployment is low, it is a less risky time to make large purchases since taking on debt is easier. However, let us emphasise that we are not finding that business cycles are driven primarily by animal spirits.

This incites others to do the same, which eventually sustains the recovery and leads to a boom. Interestingly, the boom does not stop when people have the ‘right’ stock of goods, but households instead over-shoot because the boom period is a good time to buy even knowing that a recession will eventually come. Once household have sufficiently over-accumulated, they will in mass stop purchasing, knowing that others are also stopping and knowing that they can wait out a recession benefiting for some time from the services of housing and durables bought during the expansion. The expansion therefore ends and a recession begins. Once this stock of good is again sufficiently depleted, the cycle will restart. Stated this way, business cycles appear very deterministic. However, there are always other developments in the economy that interact with this consumer cycle to create unique features. For example, the consumer cycle generally competes with forces affecting business investment, thereby causing the length and duration of a cycle to be affected by technological developments driving firm investment.

But why should we care if the macroeconomy is locally unstable versus if it is locally stable? Society’s understanding of how the economy functions, especially what creates business cycles, greatly affects how we design stabilisation policy.

In the current dominant paradigm, there is a tendency to see monetary policy as the central tool for mitigating the business cycle. This view makes sense if excessive macroeconomic fluctuations reflect mainly the slow adjustment of wages and prices to outside disturbances within an otherwise stable system.

However, if the system is inherently unstable and exhibits forces that favour recurrent booms and busts of about seven to ten years intervals, then it is much less likely that monetary policy is the right tool for addressing macroeconomic fluctuations. Instead, in such a case we are likely to need policies aimed at changing the incentives that lead household to bunch their purchasing behaviour in the first place.

Hicks, J (1950), A Contribution to the Theory of the Trade Cycle, Clarendon Press, Oxford.

Image: A man walks in a building in Tokyo. REUTERS/Toru Hanai.