The Global Crisis has brought the ins and outs of bank stability to the attention of increasing numbers of academics and policymakers. But what is the impact of bank regulation and competition on bank opacity? This column presents one of the first evaluations of the impact of bank regulatory reforms on the quality of information disclosed by banks, which in turn helps us assess bank stability.

When banks manipulate their financial statements, this can increase bank opacity and interfere with the private governance and the official regulation of banks. In particular, banks manage their financial statements to smooth earnings, circumvent capital requirements, and reduce taxes. As shown in Beatty and Liao (2011), Bushman and Williams (2012), and Huizinga and Laeven (2012), such manipulations reduce bank stability, the market’s valuation of banks, and loan quality. More generally, the findings by King and Levine (1993) imply that any factor — including earnings management — that interferes with the governance of banks can distort capital allocation and slow growth.

Nonetheless, little is known about the impact of bank regulations and competition on bank opacity. While Morgan (2002) and Flannery et al. (2004) examine the comparative opacity of banks and non-financial firms, they do not examine the determinants of bank opacity. While Barth et al. (2004, 2006, 2009) and Beck et al. (2006) find that banks allocate capital more efficiently in countries that penalise bank executives for disclosing erroneous information, they do not consider the potential role of competition on bank opacity. Given the importance of banks for economic growth, the scarcity of research on the market and regulatory determinants of bank opacity is surprising and consequential.

In new research, we provide the first evaluation of the impact of bank regulatory reforms that spurred competition on the quality of information disclosed by banks (Jiang et al. 2014).

We assess conflicting predictions about the impact of competition on opacity. Models by Alchian (1950) and Stigler (1958) indicate that greater product market competition will compel firms to adopt enhanced corporate governance mechanisms, potentially inducing the disclosure of higher-quality financial statements (e.g. Darrough and Stoughton 1990), to minimise the costs of external finance. An additional line of research suggests that competition can boost the quality of financial statements by facilitating peer-firm comparisons. When firms compete in similar markets, this eases cross-firm comparisons, and the availability of more reliable benchmarks facilitates effective corporate governance, as emphasised by Holmstrom (1982) and Nalebuff and Stiglitz (1983). Indeed, based on a field survey of 169 chief financial officers, Dichev et al. (2013) document that peer-firm comparisons are one of the most important tools for detecting earnings management, and detection is a necessary step in compelling firms to enhance the quality of their financial statements.

In contrast, other models predict that competition increases opacity. In Verrecchia (1983) and Gertner et al. (1988), competition can induce firms to manipulate the flow of information to hinder the entry of potential rivals and gain a strategic advance over existing competitors. In Shleifer (2004), greater competition spurs executives to engage in unethical behaviour, including more aggressive accounting practices.

To evaluate the impact of competition on the quality of information disclosed by banks, we begin by exploiting the removal of regulatory impediments to bank competition among US banks during the last quarter of the 20th century. Interstate bank deregulation eased regulatory impediments to bank holding companies headquartered in one state establishing subsidiaries in other states. These reforms progressed in a time-varying, state-specific process of bilateral and multilateral agreements over two decades that spurred competition among banks, as discussed in Goetz et al. (2013, 2015).

There is, however, an important limitation to these state-time measures of deregulation-induced competition – they do not distinguish among bank subsidiaries, or even bank holding companies within a state. Although interstate bank deregulation spurred competition among banks within the deregulating state, this does not necessarily imply that these regulatory reforms influenced bank opacity by intensifying competition. Perhaps, deregulation triggered, or was associated with, other changes in a state that influenced the quality of information disclosed by banks, and it is these other changes — not increased competition — that influenced bank opacity. To address this concern, we must differentiate among banks within states.

We offer a new approach for constructing time-varying, bank-specific measures of competition. Our approach is based on the ‘gravity model’ view that distance matters for investment and hence for the degree of competition faced by bank subsidiaries and bank holding companies. For example, after state A allows bank holding companies in state B to enter and establish subsidiaries in the state A, two subsidiaries in state A may face different competitive pressures from state B, depending on their distance to state B. That is, when California deregulates with Arizona, the banks in southern California may face greater competitive pressures from Arizona than banks in northern California. By integrating the gravity model with interstate bank deregulation, we build time-varying, bank-specific measures of deregulation-induced competition.

We then regress various measures of bank opacity on these bank holding company-specific and subsidiary-specific measures of competition while controlling for state-time fixed effects. In this way, we control for all time-varying state characteristics, including the state-time indicators of bank regulatory reforms. By integrating the gravity model into the process of deregulation, we differentiate among the competitive pressures facing banks in the same state and assess whether changes in these competitive pressures influence the quality of their financial statements.

We use a difference-in-differences estimation strategy. The dependent variable is one of the proxies of bank opacity. The core explanatory variables are bank holding company-specific and subsidiary-specific measures of deregulation-induced competition. In these analyses, we not only condition on bank holding company fixed effects and subsidiary fixed effects, respectively, we also condition on state-time fixed effects. Given data availability, we conduct the analyses over the period from 1986 through 2006 using quarterly data. 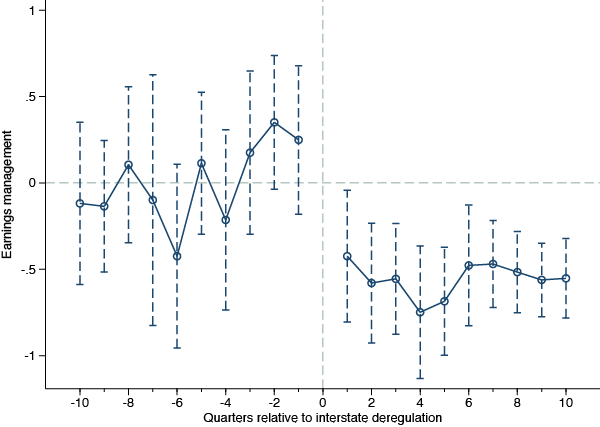 The full estimation results that distinguish among bank holding companies and their subsidiaries yield similarly strong estimates. In these gravity-deregulations analyses, identification comes from differentiating between bank holding companies and subsidiaries within the same state that differ in terms of geographic distances to other states. Thus, the results are not driven by changes in regulatory policies at the state-time level; rather, they are driven by the differential impact of interstate banking reforms on bank holding companies and subsidiaries within a state that arise because of their differential distance to competitors. The findings suggest that interstate bank deregulation reduced discretionary loan loss provisions by intensifying competition.

Beatty, A, S Liao (2011), “Do delays in expected loss recognition affect banks’ willingness to lend?”,Journal of Accounting and Economics 52: 1-20.

Beatty, A, S Liao (2014), “Financial accounting in the banking industry: A review of the empirical literature”, Journal of Accounting and Economics 58: 339–383.

Image: A sign for Bank Street and high rise offices are pictured in the financial district Canary Wharf in London October 21, 2010. REUTERS/Luke MacGregor.