How can China tackle its debt challenge?

Since the Great Recession, the global economy has struggled to regain the momentum that it enjoyed before the crash. One notable exception to this gloomy picture has been the world’s second largest economy — China.

While governments in advanced economies were forced to undertake large scale bank bailouts and a painful period of paying down the debt built up over the pre-crisis boom, China was able to bring its huge reserve stockpile to bear on its economy helping it to shrug off the initial shock. Between 2010-2014 Chinese GDP grew at an average annual rate of 7.4%, an impressive rate considering the damage wrought by the crisis.

However, beneath the headline figures there were some causes for concern over the sustainability of that rate of expansion. Most of the concern has focused on the significant increases in debt that has been built up by Chinese households and companies, which reached 207% of GDP at the end of June according to Bloomberg calculations (up from 125% in 2008).

This rapid expansion of credit helped fuel a property boom that collapsed spectacularly last year and forced the government to step in to protect local governments that had built up huge off-balance sheet debts to fund their property market bets. The Chinese government is now caught between the after effects of that shock threatening to lower growth below its 7% target and the threat of encouraging further debt build-ups that could pose a systemic threat to the country’s economy.

The World Bank has produced some concerning charts on the ability of Chinese borrowers to fund their debt burdens. What they show is that around 12% of all firms in China are not making enough to cover their interest costs: 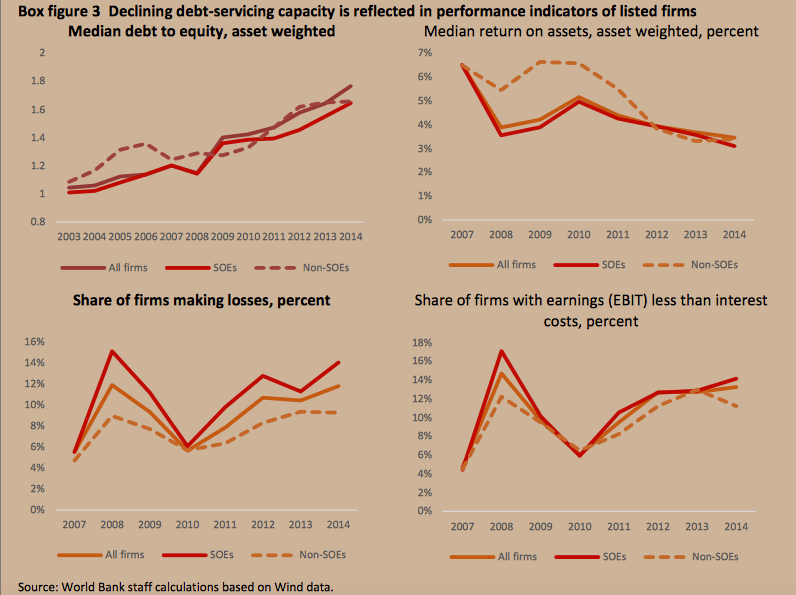 That’s a particular problem right now with the country’s growth beginning to slow as the authorities attempt to manage the transition from an export-led growth model to a more balanced approach. What China needs right now is for its new credit creation to be channelled into productive sectors that are likely to benefit from rising consumer demand within the country and support the transitional process.

What it has been getting, however, is a concentration of new lending into margin debt to allow people in effect to borrow to invest in the stock market. 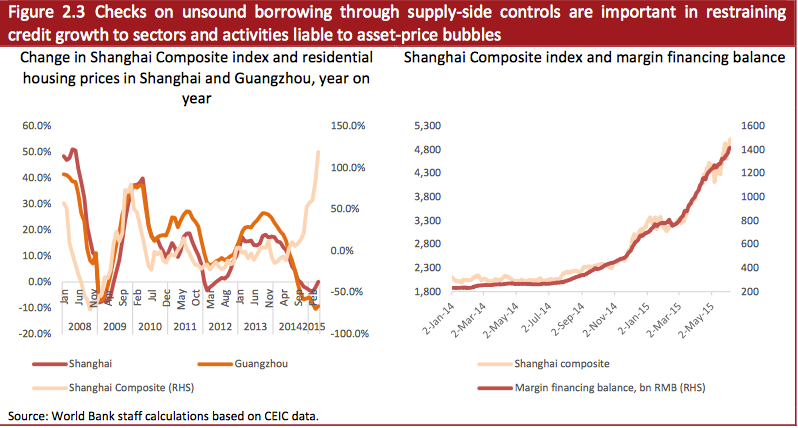 This margin financing is widely blamed for the collapse in the Shanghai Composite index since June. Having rallied by over 150% in previous 12 months the index fell by over 30% in a matter of weeks wiping some $3 trillion off its market value.

Again, the authorities have stepped in to soften the market correction. The government relaxed rules on margin trading, including allowing people to use their houses as collateral for their borrowing, while the China Securities Regulatory Commission created a $19.3 billion “market stabilisation fund” and ordered brokerage houses to start buying high quality stocks.

The People’s Daily newspaper also moved to temper market fears with articles encouraging readers to invest for the long term, including one reminding them that “it is after storms that we encounter rainbows”.

The response to the crash demonstrates the challenge facing the authorities. In their efforts to prevent market falls, whether in the property or stock market, from wiping out investors they are giving people the impression that these markets are effectively one-way bets.

The Bloomberg article quotes Emma Dinsmore, chief executive officer of R-Squared Macro Management, as saying: “The negative drag associated with China’s high debt burden will be mitigated so long as confidence remains in the government’s backstop.”

That is a worrying precedent, one that could potentially increase the scale and frequency of future boom and bust cycles.

The analysis of the World Bank in its China Economic Update of June 2015 might be instructive:

Reallocating credit resources to sectors with high growth potential could be facilitated with improved market contestability, a stronger investment climate, and less red tape. Such a reallocation is would require better aligned inventives on the financial sector which in turn require a rebalancing of the role of the state in the financial system.

This means finding ways to lower the regulatory hurdles to bank lending into sectors that have the potential for significant growth as consumers gain more spending power. The World Bank also suggests measures aimed to boost innovation, by removing barriers to free competition, encouraging new business creation and improve protections around intellectual property.