How much has global poverty fallen over the past 25 years?

In 2000, with the new millennium just a few months old, world leaders gathered at the United Nations to discuss how to tackle poverty. That broad challenge was converted into eight Millennium Development Goals to be achieved by 2015. We’re at the end of that period now and a UN summit in New York on 25 September will agree new Sustainable Development Goals. In the run-up to the summit, the World Economic Forum is looking at how the world has changed over the past quarter of a century through the prism of the original development goals, the first of which was to eradicate extreme poverty and hunger.

Turn the clocks back to 1990 and nearly half the population in the developing world was living on less than $1.25 a day – the UN’s definition of the poverty line. That proportion is now down to 14% – not quite eradication but a fall that has nevertheless taken more than a billion people out of extreme poverty.

Data from the Millennium Development Goals Report 2015 shows that the number of people living in extreme poverty has been cut from 1.9 billion to 836 million, with most of that reduction coming after the year 2000.

All regions have seen reductions in poverty, but there have been particularly sharp falls in China and India while sub-Saharan Africa has lagged. 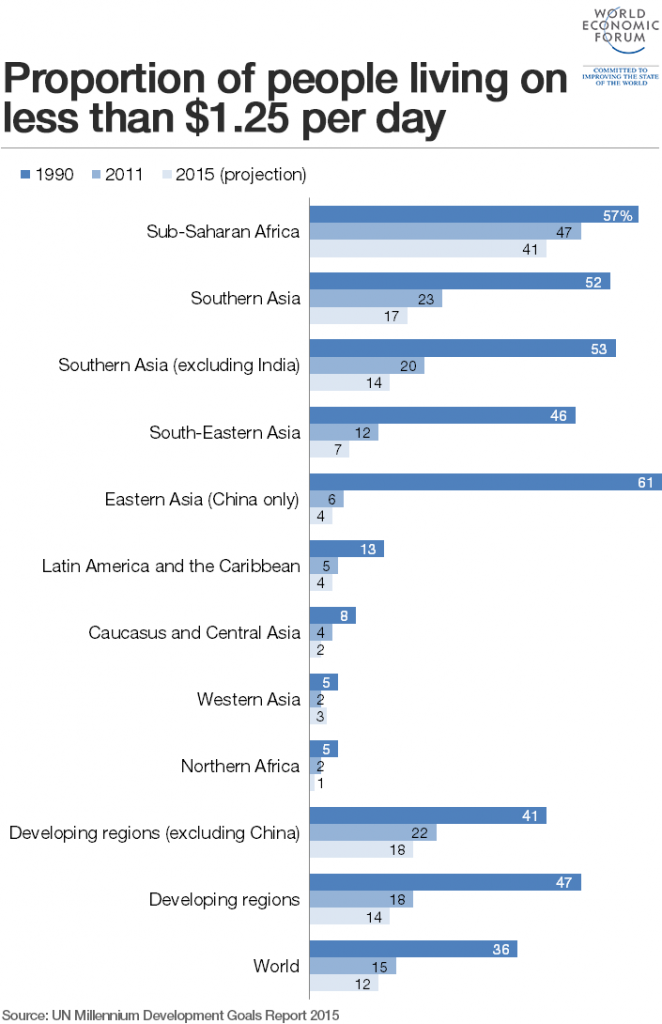 This is part of a series on the Millennium Development Goals, in which we look at how the world has changed over the past quarter of a century through the prism of the UN’s original development goals.

Have you seen?
Why the sustainable development goals matter
Why financial inclusion is key to reducing poverty
Can the world buy its way out of hunger?

Image: A displaced Somali woman carries a child and her belongings as she arrives at a temporary dwelling after fleeing famine in the Marka Lower Shebbele regions to the capital Mogadishu, September 20, 2014. REUTERS/Feisal Omar