Why do older people oppose immigration?

The Mediterranean Crisis has been fueling anti-immigrant sentiment across Europe, adding even more challenges to the debate about immigration policies. The difficulty to agree on immigration matters is also evident if we look at the current state of the EU immigration policy: rather than a common policy, it is a collection of 28 migration regimes with marked differences in terms of openness and flexibility.

This is a problem because Europe’s population is expected to age rapidly. And even though immigration won’t solve all of Europe’s economic woes, more open and flexible immigration policies will inject much-needed flexibility and dynamism into Europe’s graying economies.

Some of the countries projected to gain the most from a boost in working age populations are also overwhelmingly averse to immigrants.

Moreover, it is old people everywhere who oppose immigration the most, across the board (see Figure 1). Older natives disproportionately oppose immigration, regardless of income, education and employment status. 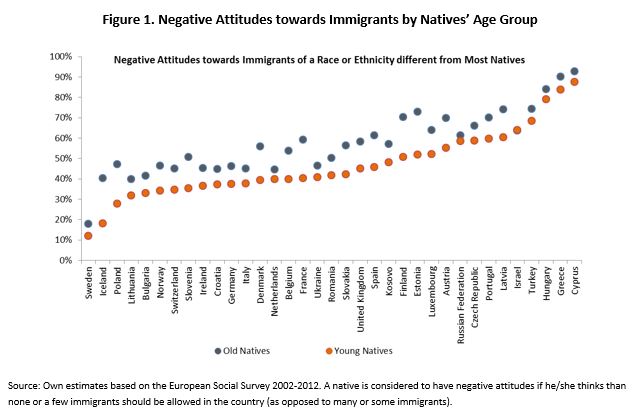 This is paradoxical since older people are more likely to benefit from an influx of immigrant workers than everyone because:

1.Older citizens are more likely to be retired and, thereby, less concerned about facing increased competition in the labor market.
2.They typically have more savings whose rate of return may rise if the increased labor force strengthens the economy.
3.Immigration may improve the fiscal sustainability of pay-as-you-go pension systems.
4.The price of elderly-related services could see an appreciable drop as the labor force expands.

However, the aversion of older natives against immigrants could be driven not only by preferences evolving with age but also by generational changes. When we compare the evolution of attitudes towards migrants throughout the life cycle for groups of individuals born in the same year, we find that in most countries they are quite stable or improve as individuals become older. These results are more consistent with the predictions of economic theories (i.e. if anything, natives should become less averse to immigrants with age).

In other words, our results indicate that the more negative attitudes of older natives against immigrants are driven mostly by a generational change.

As long as this generational change continues, our results suggest that aging societies may become more – not less – open to immigration as the elderly increasingly represent a larger fraction of the population and newer more cosmopolitan generations replace the current one.

This blog builds on a just launched World Bank report entitled “Golden Aging: Prospects for Healthy, Active, and Prosperous Aging in Europe and Central Asia.”
A different version of this blog was originally published on July 22nd, 2015 on Brookings:http://www.brookings.edu/blogs/future-development/posts/2015/07/22-aging-migration-winkler

This article was first published by The World Bank’s People Move blog. Publication does not imply endorsement of views by the World Economic Forum.

Author: Hernan Winkler is an economist in the Office of the Chief Economist for Europe and Central Asia (ECA) at the World Bank.

What to expect from the WTO Conference in December

For the first time in four years, the WTO Conference will bring together 164 members for the 12th Ministerial Conference (MC12) – here's what to expect.