July 2015 was the hottest month ever

July 2015 was the hottest month ever recorded across the globe since records began in 1880, according to the latest State of the Climate Report from the National Oceanic and Atmosphere Administration (NOAA). 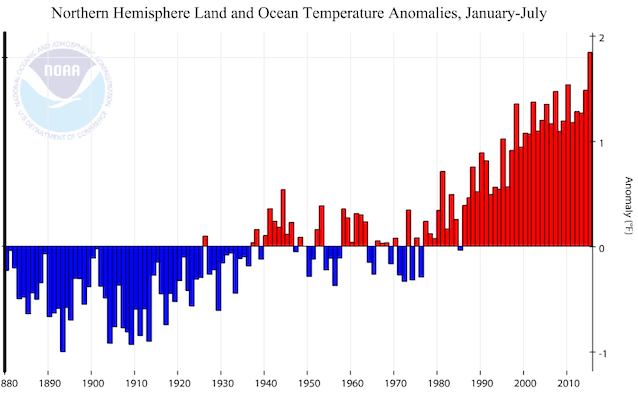 The NOAA report notes a series of anomalies in the global climate. In the United States the Northwest and Southeast were warm while the central United States region was cool. Record precipitation in some areas of California did not improve the long-term drought it currently suffers from. Meanwhile, a high pressure dome over the Middle East led to what is considered one of the most extreme temperatures ever recorded – 74°C (165°F) on July 31st.

El Niño, an irregular weather event and complex series of climatic changes, explains some of the increase in temperatures. Some of the effects of El Niño include the reversal of wind patterns across the Pacific, drought in Australasia, and unseasonal heavy rain in South America. But NOAA scientists say El Niño can’t explain the scale of the temperature increase and that this year is on track to become the hottest year since global records were first gathered.

Image: Spectators cool off in front of misting fans at the Australian Open REUTERS/Bobby Yip