Which countries offer the most paternity leave?

Earlier this summer, Virgin boss Richard Branson announced his company was offering new dads up to 12 months’ leave on full pay. It’s clearly catching on: this week, Netflix introduced an unlimited leave policy for all parents, allowing them to take as much time off as they want in the first year after a child’s birth or adoption, on full pay.

It’s a sign of the growing recognition that when fathers take time off to look after their newborns, it benefits them, their partners and their children. As an ILO report on parental leave noted, paternity leave has positive effects on the child’s development and helps break down traditional social attitudes of men as breadwinners and women as caregivers, which are damaging to both sexes.

More generous paternity leave could also go a long way to closing the workplace gender gap, both in terms of pay and career advancement. Research has shown that after having children, women pay a motherhood wage penalty of around 4% per child, in part because of the career interruptions related to giving birth and raising children. A more equitable division of parental leave could be the solution.

That’s what policy-makers in Sweden believe. Back in 1974, it was the first country to introduce gender-neutral parental leave and the first to implement “daddy leave” – non-transferable parental leave reserved exclusively for fathers. It’s also consistently recognized as one of the most gender equal countries in the world.

So what does paternity leave look like elsewhere? This chart from the OECD provides an overview – and some of the findings may come as a shock.

Figure 1: Duration of father-specific leave and average payment for an individual on national average earnings (2014) 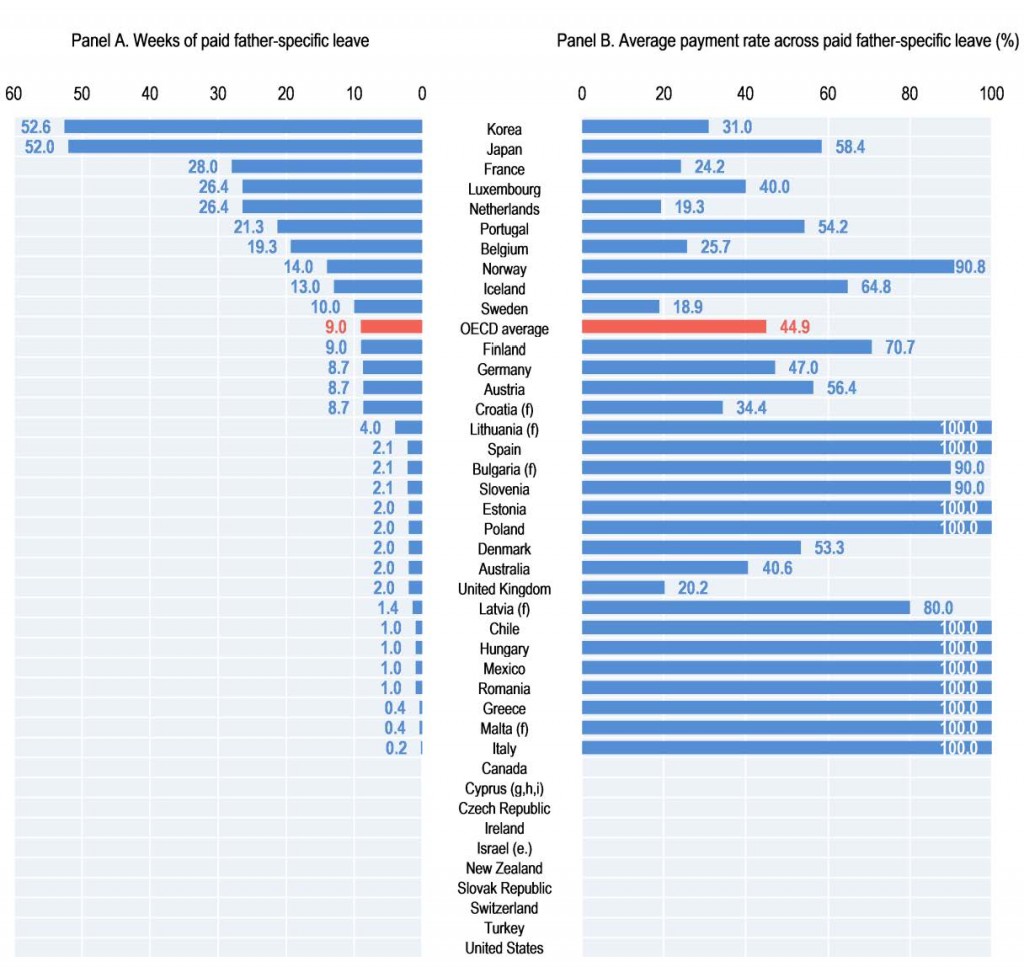 The data relates to what the OECD calls “father-specific leave”, which is leave reserved exclusively for fathers. It includes paternity leave, individual rights to parental leave and any shared parental leave that is reserved for fathers only.

It may be surprising to see countries like Korea and Japan at the top of the table; after all, they ranked 117th and 104th respectively of 142 countries in the latest Global Gender Gap Report. But what these findings show is that unless legislative changes are accompanied by cultural ones, progress will be limited. Despite having generous paid paternity leave, less than 2% of men in Japan and Korea actually use it. “It is still hard to see fathers seeking paternity leave because of the widespread notion that taking leave for child rearing is for women,” pointed out an article on the situation in Korea.

In Sweden, by contrast, almost 90% of men take paternity leave, and in 2012 Swedish dads took almost a quarter of the total leave offered to parents. But even there, change didn’t happen overnight. The first year the country introduced gender-neutral parental leave, only 0.5% of fathers took advantage. The progress it has made since implementing these policies is encouraging for all those countries now putting in place similar measures.

Have you read?
5 ways men can support gender equality
Why are our daughters still trapped by sexist stereotypes?
How to choose gender equality development goals