What’s the latest on US wage growth?

The jobs numbers released by the U.S. Bureau of Labor Statistics indicate that wage gains in the United States are far below what would be considered healthy wage growth. The vital signs of the labor market in today’s report and in other labor market flows data do not suggest we should be optimistic about sustained wage increases in the near future.

Wages rose in July at just a 2.1 percent rate over the past year, similar to the 2.0 percent annual growth in June. For production and nonsupervisory workers, who comprise about four-fifths of the workforce, the annual rate of wage growth was only 1.8 percent. The U.S. economy did add 215,000 jobs in July, gaining more than 30,000 jobs in each of the retail, health care, and accommodation and food services industries. After prior revisions, the average monthly job gains over the last three months have been about 235,000.

Although this kind of employment growth would be a positive development in a very tight labor market, the current rate of job gains will keep distant the goal of full employment. Even though the overall unemployment rate was 5.3 percent last month, the same as in June, the employed share of the prime-age population, ages 25 to 54, was 77.1 percent last month, basically unchanged from where the rate has been stuck at 77.2 percent for five of the six prior months. This is well below its average of 79.9 percent in 2007 before the start of the Great Recession.

The U.S. economy has not yet generated the robust labor demand that will secure sustainable increases in pay across the wage distribution. Historically, the U.S. labor market has experienced healthy wage growth when the employed share of the prime-age population, ages 25 to 54, has exceeded 79 percent. Weak nominal wage growth (before accounting for inflation) makes it difficult for workers to reduce their debt burdens, which may in turn be slowing the pace of the current recovery by crimping consumption.

Data on labor market flows, not included in today’s report, also show signs that the economy is far from the level of dynamism we expect in a well-functioning labor market. One key indicator is the hiring rate from Job Openings and Labor Turnover Survey, published separately by the Bureau of Labor Statistics. The 215,00 jobs added in July represent net job gains, after accounting for both new hires of workers into jobs and the separations of workers from jobs because they either quit, were laid off, or were fired. The private-sector hiring rate—the number of hires divided by total employment—accelerated in 2014, but now is only at 3.9 percent. Put another way, despite 58 consecutive months of net job creation in the current recovery, the rate of hiring has only recently reached a level about equal to where it bottomed out during the last business cycle between 2001 and 2007. (See Figure 1.) 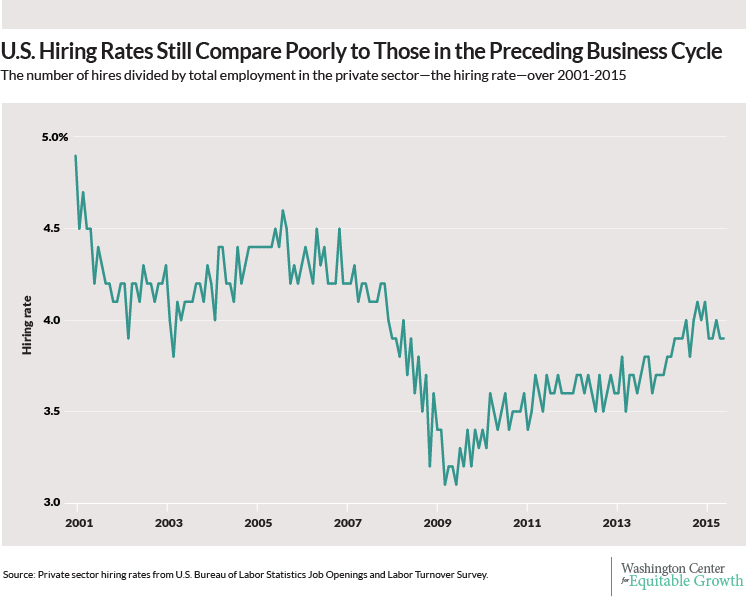 The strength of hiring rates has consequences for the amount of wage growth workers can expect to attain. The last time the U.S. economy experienced nominal pay raises for production workers above 3.5 percent was from 2006 through early 2009. This era of healthy wage growth followed a period from 2004 through early 2007 when the monthly hiring rate was consistently at least 4.2 percent. The hiring rate reached 4.5 percent and higher in 2005 and 2006. To put the current 3.9 percent hiring rate into perspective, in order to reach these prior peak hiring rates, every firm today would have to increase its hiring, on average, by more than 15 percent.

Turning to another source of data on labor market flows, we can look specifically at the rate of job-to-job transitions, the Job-to-Job Flows data produced by the U.S. Census Bureau. Workers are hired either from the pool of the non-employed population or they are hired from another job. These latter, job-to-job hires are important for wage growth because employers are more likely to increase pay when they need to recruit someone away from another job as opposed to hiring an unemployed worker. Quarterly job-to-job hiring rates in the most recent data from the end of 2013 were only 4.9 percent, similar to the low point of 5.0 percent a decade ago in 2003.

Relatively low employment rates, stagnant wages, and low hiring rates are worth considering amid discussions about whether the Federal Reserve should raise interest rates sometime this year. When the Fed raises rates, it will increase the difficulty of firms to expand and hire, and it will reduce consumer purchases of homes and automobiles. Although raising rates soon provides the Fed with the flexibility of lowering interest rates during a future downturn, it is hard to see how the labor market is currently in a position to bear any more downward pressure on employment and wages.

Image: Workers on the assembly line replace the back covers of 32-inch television sets at Element Electronics in Winnsboro, South Carolina. REUTERS/Chris Keane