Why mobile money is big business in Africa

Another week and another bank in Africa is entering the mobile money space.

Pan-African Ecobank is partnering with Orange Cameroon to allow the telco’s customers with accounts at the bank to transfer cash between the two services. The two firms are already working together in Mali and plan to introduce the service in four other African countries.

Banks partnering with mobile companies is the latest attempt by financial firms to tap into the continent’s large populace of the “unbanked.”

In sub-Saharan Africa, only a third of adults have access to bank accounts. Compare this to Latin America, another emerging market, the figure stands at 51%, according to the World Bank. There are a lot of people whose money simply never touches the region’s financial systems.

The mobile phone revolution and the rise of mobile money, especially in east Africa with platforms such as M-Pesa, has changed this.

Mobile money is now big business in Africa. Last year, the market generated $656m in revenue and in the next four years this is expected to double to $1.3 billion, analysts say.

Until recently, financial firms ceded this space to telecom companies. But the clear growth of the sector has compelled a re-evaluation. Now banks are not only trying to compete in this space but also offer new products that promise access to banking services to those who up until this point were excluded.

So in Nigeria, for example, GT Bank are getting in business with Etisalat Nigeria, the country’s third biggest mobile operator, to create GTEasySavers, a savings account that can be opened via mobile phones. For the 57% of the country with no access to formal financial services, that’s a small step in the right direction.

And in Kenya, in 2011, only 42% of people had bank accounts. That has risen dramatically, driven by mobile money platforms. 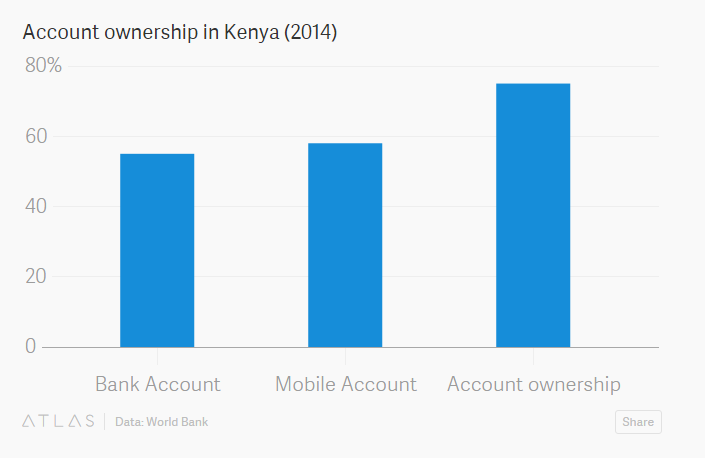 A battle for supremacy

Equity is one of the biggest banks in east Africa and since the soft launch of Equitel in October of last year, the service has attracted a millions subscribers. The bank aims to increase that figure to 5 million by year’s end.

“We are removing barriers of financial inclusion, we are targeting telecoms to compete on data, SMS, voice and all levels of money transfer,” James Mwangi, Equity Bank’s chief executive officer said at the product’s launch.

And the market is there. Mobile money transfers claim 85% penetrationin Kenya and $23 billion passed through the platforms in 2014 alone, according to Kenya’s central bank–equivalent to 42% of the country’s GDP.

And the dominant player in this space is Safaricom, controlling two-third market share with over 20 million subscribers generating $318 million of revenue. But with the launch of Equitel, powered by its rival Airtel Kenya, Safaricom’s number one status may finally start to get challenged.

“Competition between Equitel (banks) and Safaricom ‎(telcos) will benefit end consumers and financial inclusion in general as mobile money has a platform to reach those who are not included,” Martin Warioba, a tech consultant with the World Bank, told Quartz. “As long as pricing is low enough to include the unbanked, mobile money services and healthy competition will benefit consumers and increase financial inclusion.”

With Equitel being free of charge and interoperable across banks and other mobile money services, Equity Bank could challenge Safaricom’s dominance in the market, especially since they charge a fee for the use of M-Pesa.

But the company’s CEO is not worried. “We welcome competition; it is a true indicator of the free and robust operating environment we have in Kenya,” Bob Collymore said in a statement.

Safaricom has its own partnerships, with Commercial Bank of Africa (CBA) providing M-Shwari, a platform whereby people can access banking services such as saving accounts and small loans via their mobile phones. And in March they launched KCB M-Pesa with Kenya Commercial Bank, a mobile phone-based loan repayable platform.

As we’ve written before at Quartz, increasingly in Africa, banks want to be in business with mobile phone companies, while telecom firms have, essentially, become financial institutions.