Does digital media use increase stress?

Not long ago, I found myself in a client meeting, sitting opposite a senior manager from an overseas parent company. Before him at the conference table he had laid out three telephones, a computer and a tablet. He was also attempting to pay attention to a web-delivered audio visual presentation, supplemented by comments from his five colleagues in the room and our three-person consulting team. We found ourselves repeating material he had missed while responding to a ping from one of his devices. He struggled to handle it all and his face showed the strain.

This kind of situation is not rare. We’ve all been in meetings where every person there is active on at least two devices while – theoretically at least – also paying attention to the substance of the discussion. These days, the only thing as ubiquitous as electronic media is commentary about the ubiquity of electronic media, in meetings and everywhere else. One main thread in the conversation has to do with stress. Does social medial use so overload our senses and interrupt our thinking that our stress increases along with our connectedness, as it did for our overseas colleague? Or, conversely, does being connected to other people through accessible, always-on technology actually strengthen personal bonds and reduce our stress? The answer, it seems, is both.

The light side: stress reduction

According to findings from a study by the Pew Research Center, frequent internet and social media users do not necessarily experience increased stress. Certainly, those who perform knowledge work are greatly aided by the expanded access to colleagues and information provided by digital media. It’s hard to imagine getting through a work day without electronic tools that provide instant connections with helpful co-workers or immediate answers to difficult questions. In this context, technology’s effect on our working lives has certainly been labour-saving as well as stress-reducing.

Beyond the work tool function, the use of digital media to build relationships can also mitigate personal stress. The positive effect emerges most strongly for women. The Pew Research analysis found, for example, that a woman who uses Twitter several times daily, who sends or receives 25 emails per day and who shares two digital pictures through a mobile phone per day scores 21% lower on a measure of stress than a woman who does not use these technologies. For men, the researchers found no relationship between psychological stress and frequent uses of social media, mobile phones or the internet more broadly. Women, it seems, not only do a better job of relationship-building in general, but also prove to be more adept than me at using digital media to maintain those connections.

The dark side: stress increase

But there are other dimensions to the story of digital media and stress. Researchers from the University of St. Gallen in Switzerland studied technostress, the result of having more content than one can attend to without anxiety. They found three major phenomena are most directly associated with stress:

The pressures associated with managing the sheer volume of electronic stimulus are heavy enough, but they are compounded by the leakage of media-borne content across the boundary that once separated our work and personal lives. The quest for work/life balance has given way to tolerance for work/life integration. We can no longer easily differentiate blocks of toil and leisure, business and personal, time on and time off. The next innovation will only add to the stress from overload and invasion as we struggle to master new filaments of connection.

Even the network-building advantages of social media may have a dark side. Perhaps learning of our friends’ latest professional successes, or their fantastic tropical vacations, or their children’s triumphs on the soccer field increases envy-driven stress. Alternatively, it may be that some of us feel pressure to carefully curate the presentation of our own lives, highlighting the great birthday party but hiding the impending divorce. We don’t yet know for sure whether network participation causes stress, or whether it simply attracts people prone to angst. Nevertheless, as the chart below suggests, some relationship exists, with 83% of social media participants saying they are somewhat or very stressed, compared with 72% of non-participants. 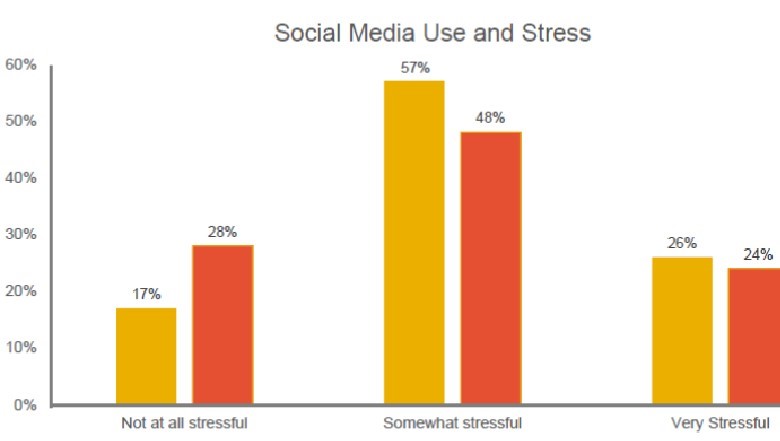 Moreover, stress can be as contagious as the common cold, with social media acting as one disease vector. Our natural human tendency to be empathetic makes us sensitive to distressing events in the lives of network members. The more social media connections we have, the greater that awareness may become, as may the risk of stress contagion. The above mentioned Pew Research Center analysis concluded that caring about others brings a cost that increases when social media expand our exposure to others’ unfortunate circumstances.

Our ubiquitous connectivity also brings other sources of tension, including a decline in civility. Model Chrissy Teigen recently lashed out at online critics who posted nasty comments about her weight in response to a photo she had uploaded to Instagram.com. “In what other real life situation would you walk up to someone and tell them they’re fat or gained weight?” she asked. Good question. Electronically mediated interactions are more anonymous and often more bluntly negative than face-to-face encounters.

Dealing with the stress generated by social media connections begins with awareness. Some people even go as far as to keep a journal of their interactions and responses. They refer to their notes so they can identify the situations that cause the most stress and find ways to react to those. With awareness as a foundation, coping strategies fall into three general categories:

Clearly, digital media use confers a mixed blessing. It informs and distracts, energizes and depresses, builds and breaks bonds and so brings both pleasure and pain. Our digital interactions play to our deepest human needs for intellectual and emotional stimulus, and are therefore subject to overuse, abuse and even addiction. At the same time, they afford the means for almost infinite expansion of the kinds of sharing that make human lives most gratifying. How mindfully, carefully and judiciously we use these tools will determine whether they help or harm us. To paraphrase Shakespeare’s Cassius, the fault – and the opportunity – lies not in our connections, but in ourselves.

Have you read?
How can brands survive in the digital age?
How is digital media transforming the way we work?

Image: People use their smartphones in New York City, in this picture taken November 6, 2013. REUTERS/Shannon Stapleton

More on Future of Media, Entertainment and Sport View all

How enthusiastic is your country about the rise of the metaverse?

High-income countries are noticeably less enthusiastic about the metaverse than emerging ones - but people still widely expect it to change their lives.

How to build an economically viable, inclusive and safe metaverse

It is important for us to define and build the metaverse. Here is what seven business leaders had to say about which challenges we need to focus on and what areas to highlight.

Why LGBTQ representation should be a priority for business and media

Here's how to boost digital safety now and in the future