This is what the world’s education gender gap looks like

This is part of a series on the Millennium Development Goals. In the run-up to a UN summit in New York on 25 September, we look at how the world has changed over the past quarter of a century through the prism of the original development goals.

The third Millennium Development Goal (MDG) was to “promote gender equality and empower women” and, given the positive effect that education has on all other development goals, the primary target was to eliminate gender disparity in primary and secondary education by 2005, and in all levels of education by 2015.

Progress has been made and, taking developing countries as a whole, this target has been met. But there are enormous regional differences.

The greatest strides have been taken in primary education, where five of the nine developing regions (the Caucasus and Central Asia, Eastern Asia, Latin America and the Caribbean, South-East Asia and Southern Asia) have achieved parity.

The largest gender disparities are in tertiary education, with only one developing region, western Asia, achieving the target.

The chart below summarizes progress around the world over the past quarter of a century and illustrates how the gender gap can cut both ways. Boys are at a disadvantage at both secondary and tertiary levels in three developing regions – Latin America and the Caribbean, eastern Asia and South-East Asia. 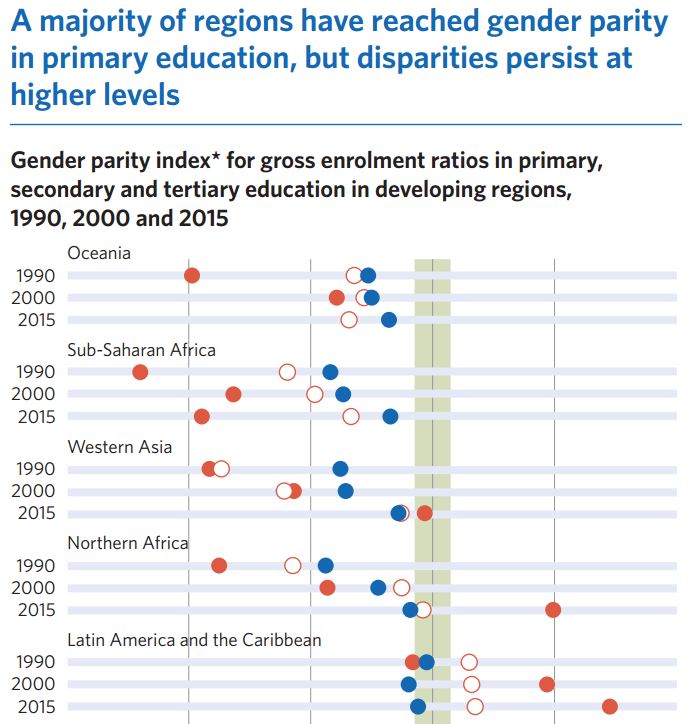 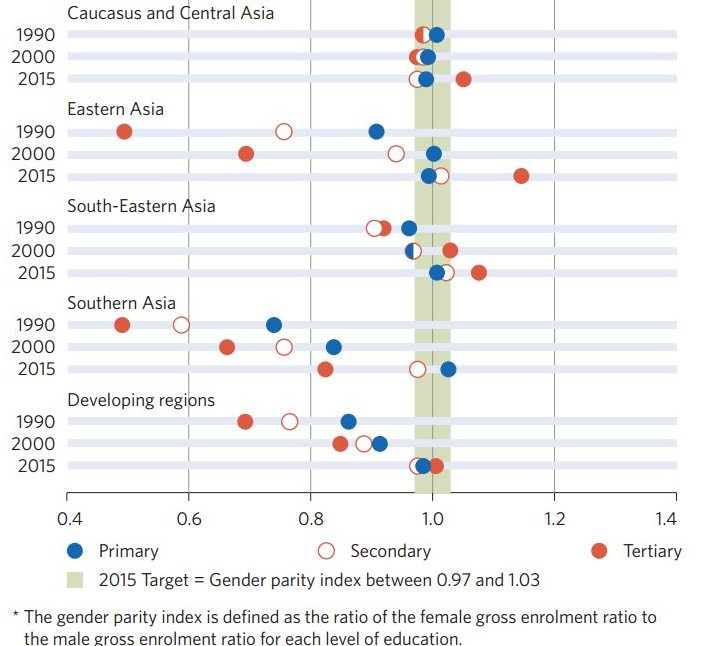 There are two other important aspects of gender mentioned in the MDGs – labour-force participation and political representation. Neither has shown the same sort of progress as education.

Women now make up 41% of paid workers outside the agricultural sector, an increase from 35% in 1990. However, the global totals show that three-quarters of working-age men participate in the labour force, compared with just half of working-age women.

When it comes to parliamentary representation, women have gained ground in nearly 90% of the 174 countries for which there is data. During the past 20 years, the average proportion of women in parliament has nearly doubled. But this still means that only one in five elected members is a woman.

More from the series
How much has global poverty fallen?
How close are we to universal primary education?
More on the Millennium Development Goals

Image: Indian children ride in a cart on the way home from school in the outskirts of New Delhi. REUTERS/Pawel Kopcznsk