How do push factors affect capital flows to emerging markets?

Various episodes of large, widespread waves of capital flowing to (and from) emerging markets over the past decade have re-emphasised the importance of so-called push factors in driving flows. Following the findings of Calvo et al. (1993, 1996), Chuhan et al. (1998) and others, recent papers (e.g. Forbes and Warnock 2012, Fratzscher 2012) have again documented how conditions in advanced countries can drive capital flows by non-residents (‘gross inflows’) to emerging markets, even more so than for advanced countries. Although the importance of specific factors varies across studies, a consensus has emerged on the role of US monetary policy, the supply of global liquidity (especially in US dollars) and global risk aversion in helping explain the high synchronicity of capital flows to emerging markets (see, among others, Milesi-Ferretti and Tille 2011, Shin 2012, Rey 2013, Ahmed and Zlate 2014, and Cerutti et al. 2014).

Less appreciated has been the significant heterogeneity in the sensitivity to common dynamics across borrower countries. The sudden (and unexpected) deterioration in financial conditions in emerging markets during the so-called ‘taper tantrum’ around May 2013 illustrates this knowledge gap. While almost all emerging markets experienced outflows during this episode, some were much more affected than others (Sahay et al. 2014). But why some emerging markets are more sensitive to global factors than others remains unclear. Although some researchers have pointed to the importance of weak borrowers’ macroeconomic and institutional fundamentals in worsening the effects of changes in push factors on recipient markets (Prachi et al. 2014 and Ahmed et al. 2014), others have found opposite results.1 Aizenman et al. (2014) find over the very short term (24 hours) following announcements related to the taper tantrum a sharper deterioration of financial conditions in robust emerging markets than in fragile ones. And Eichengreen and Gupta (2014) find that better macroeconomic fundamentals (e.g. lower public debt, a higher level of reserves, or higher economic growth) did not provide insulation during the tantrum episode and rather that larger, more liquid markets experienced more pressures. As such, what drives the sensitivity of emerging markets to push factors is still very much an open question.

In new research, we investigate the sensitivity of capital inflows to 34 emerging markets to global factors over the past 15 years. We confirm that aggregate flows move in large part due to global (push) factors, but with major differences in sensitivities across flow types and emerging markets. Importantly, how push factors affect emerging markets appears to depend on financial market characteristics, including the level of local liquidity and the composition of their foreign investor base. In particular, countries relying more on international mutual funds and global banks for their external financing are significantly more affected by push factors. Sounder institutional fundamentals (e.g. investor protection, rule of law) and stronger macroeconomic performance (e.g. higher growth, lower debt) do not insulate emerging markets against waves of capital flows.

Commonality, but not in all flows to emerging markets

Although the importance of push factors in affecting capital flows to and from emerging markets is well established, the significance and impact of specific proxies (such as US interest rate and the VIX) varies greatly across studies and samples (see Koepke 2015 for a recent review). Rather than using various proxies for push factors, we estimate the co-movement in flows directly from capital flow data. In particular, using quarterly balance-of-payments data for 34 emerging markets between 2001 and 2013, we estimate a latent factor model to capture commonalities in flows to emerging markets separately for aggregate and disaggregated flows. Besides avoiding the problem of choosing specific factors, our analysis yields two important results. First, the estimated common factors tend to capture a much greater part of the co-movement than those traditionally used, i.e. observed variables such as VIX. Second, the amount of co-movement greatly varies by type of inflows, highlighting the heterogeneity in behaviour. Although bank-related and portfolio bond and equity inflows co-move substantially across emerging markets, foreign direct investment inflows do not. Except for periods of global instability – during which many types of flows move together, Figure 1 shows that the common dynamics among inflows can vary greatly by type.

Figure 1. Common factor among all and various types of capital flows to emerging markets 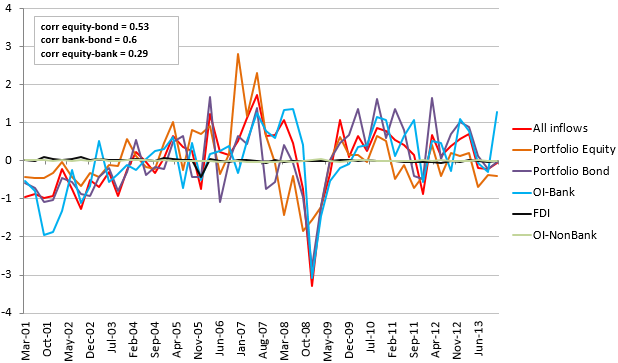 This plots the estimated common emerging market dynamics estimated using the latent factor model. ‘All inflows’ reports the results using total (or aggregated) gross inflows. Portfolio equity and bond flows, foreign direct investment flows and other investment to banks (and non-banks) flows are also reported separately. Foreign direct investment involves a controlling claim in a company (a stake of at least 10%). ‘Other investment’ includes a broad residual array of transactions/holdings between residents and nonresidents, such as loans, deposits, trade credits, etc. Within this category, we distinguish those transactions or holdings in which the domestic counterpart is a bank (OI-Bank) from those with other counterparts (OI-NonBank).

After estimating their common dynamics, we study how the various flows to different emerging markets react to changes in their type-specific commonalities. The estimation reveals much heterogeneity in sensitivities to the common dynamics, even within the same country for different types of flows (see Figure 2). Some emerging markets, such as Brazil, Indonesia, Thailand, Turkey and South Africa, display high sensitivity to the common dynamics for all types of flows. Another group, including countries such as Pakistan, Philippines, India and Mexico, displays a high sensitivity in only one or two types. At the other hand of the spectrum, countries like Estonia, Latvia, and Chile display uniformly low sensitivity for all types of flows. More generally, we find that Asia is the most sensitive region across emerging markets.

Examining the sources of this heterogeneity across emerging economies shows that financial market characteristics, such as liquidity in the recipient country and composition of the foreign investor bases, rather than macroeconomic or institutional fundamentals, most robustly explain countries’ sensitivities. ‘Good’ fundamentals, in the form of a high quality of institutions or low public debt, do not tend to provide much insulation from changes in global factors. For portfolio bond inflows, countries with higher levels of reserves, higher trade openness and more flexible foreign exchange regimes actually tend to be more sensitive to global push factors.

Importantly, after controlling for fundamental characteristics, we find a strong and consistent role for the liquidity of local financial markets and the composition of the foreign investor bases. For equity flows, for example we find that more liquid markets are substantially more sensitive to changes in global conditions. And for bond, equity and bank flows, countries with more international funds (e.g. mutual funds) and global banks among their non-resident investors are significantly more sensitive to global factors.2 This suggests that emerging markets with deep financial markets and a high exposure to ‘fickle investors’, rather than those with sounder institutional or macroeconomic fundamentals, can expect to receive (or lose) more external funding when financial conditions in advanced countries improve (or deteriorate).

Findings relate to recent work on the pro-cyclical behaviour of global investors and related their impact on the variability of emerging markets external funding. Bruno and Shin (2015a and 2015b) show that large, international active banks expand and contract their cross-border claims in part in response to global liquidity and monetary policy in advanced countries, notably in the US, and directed at the margin towards (or away from) emerging markets. Also, as emerging markets financial markets tend to be more internationalised and have a large foreign (bank) presence, they are more affected by global monetary policy conditions (Cetorelli and Goldberg 2012). And international investors, such as mutual funds, transmit shocks in advanced countries to a wide range of markets, with flows to emerging markets becoming especially pro-cyclical (Raddatz and Schmukler 2012, Jotikasthira et al. 2012, Puy 2015).

Although the behaviour of some classes of investor is being documented at the micro-level and receiving increasing attention from policymakers, we show that the development of local financial markets and the type of investor base generally can shape how global monetary and financial developments in ‘core’ countries affect the properties of capital flows to emerging markets. Since good fundamentals do not seem to assure a country’s insulation from global factors, our findings suggest that authorities in emerging markets should put efforts into collecting information about their foreign investor base, especially about the role of large banks, funds and asset management companies. While, despite recent efforts, systematic and reliable information on the investor composition of foreign holdings is still lacking, our analysis shows that some ready indirect measures can be created and used to assess individual countries’ sensitivities.

Disclaimer: The views expressed are those of the authors and do not necessarily represent those of the Federal Reserve Board, IMF or IMF policy.

Image: U.S. one dollar bills blow near the Andalusian capital of Seville in this photo illustration taken on November 16, 2014. REUTERS/Marcelo Del Pozo