How does austerity affect economic growth?

The Global Crisis that began in 2008 has rekindled the debate on the impact of fiscal policy on economic growth. At the outset of the Crisis the focus was on whether fiscal stimulus boosts economic growth. Since 2011 or so, with the Crisis becoming more severe in some European countries and Greece in particular, the emphasis has shifted to whether fiscal adjustment should be seen as part of the emerging ‘consensus’ view (Baldwin and Giavazzi 2015) on the causes of the output loss. Several researchers have delved into the question using novel, sophisticated methods, but these have proved difficult to communicate to the public at large.1

Meanwhile, public discourse has been influenced by simple charts analysing the correlations between measures of fiscal ‘austerity’ and economic growth for small samples of countries over limited time periods. Academic studies have not further developed this approach, perhaps because of concerns about the direction of causality. Although such concerns are legitimate, the modest task of analysing empirical association in a more systematic manner may be worthwhile. In a recent study (Mauro and Zilinsky 2015), we explore the correlations in the data starting from the simplest and gradually building up – in a step-by-step, transparent manner – to multivariate regressions based on various samples of countries for different periods. The results show that simple correlations are no longer significant when considering slightly longer sample periods and omitting outliers, like Greece, from the sample. In multivariate regressions using broader samples, a tightening of fiscal policy is significantly associated with lower economic growth only in some specifications and estimation samples.

Readers of op-eds and blogs on this topic may be familiar with scatter plot charts reporting the average annual change in the cyclically adjusted primary balance as a share of GDP on the horizontal axis, and the average real GDP growth rate over the past few years on the vertical axis.2Figure 1 is modelled after a chart by Paul Krugman (2015), but is intended to be representative of many similar exercises. The estimated slope coefficient in a simple regression is -1.25 – an additional annual fiscal ‘tightening’ equivalent to 1 percentage point of GDP, on average, over the sample period is associated with a further decline in the average real GDP growth rate by 1.25 percentage points. The standard error is 0.24 and the coefficient is statistically significant (at the 1% level). 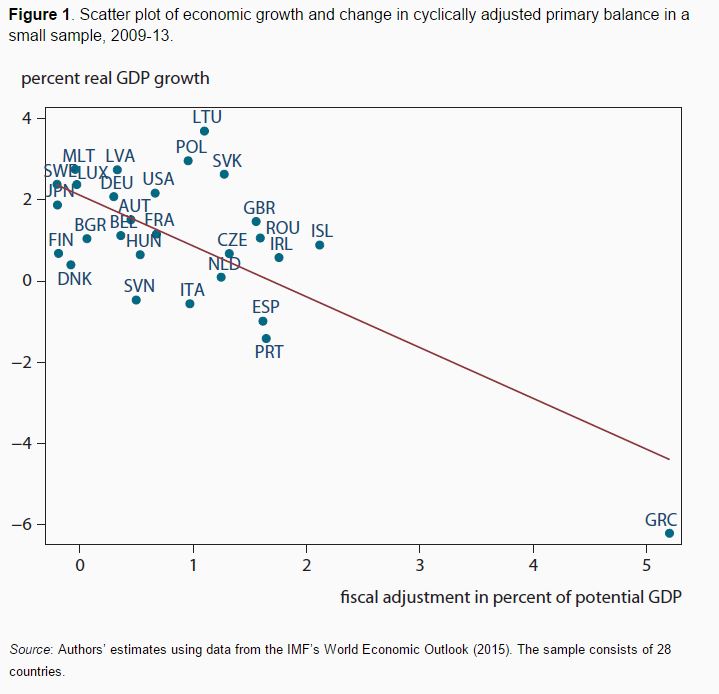 To explore such empirical associations more thoroughly, one needs to consider:

The issue of causality is thornier. Fiscal variables are strongly affected by economic growth. Despite attempts to construct ‘cyclically adjusted’ fiscal variables, there are concerns whether such variables adequately capture the direction of causality between the fiscal deficit and economic growth. It is often argued that if countries undertake fiscal stimulus when their growth is slow, the observed correlation between fiscal stimulus and economic growth will underestimate the true causal relationship between stimulus and growth. Yet this reasoning assumes that financing will be available to a government regardless of the economic growth rate. In the initial stages of the global economic and financial crisis, low projected economic growth heightened concerns about fiscal sustainability in several countries, making it difficult for them to undertake fiscal stimulus. Thus, while concerns about the direction of causality are warranted, the magnitude and sign of resulting bias are not fully understood.

We consider two slightly longer sample periods: 2009-14, to bring the sample period up to date by one additional year; and 2007-14, to encompass countries’ policy responses during the initial stages of the global economic and financial crisis. The latter is worthwhile, because several countries undertook major fiscal stimulus in 2008 and 2009. For example, Spain reduced its cyclically adjusted primary balance by 9.9 percentage points of potential GDP between 2007 and 2009 – the largest fiscal stimulus among sizable OECD economies. Accordingly, using the change in the structural fiscal deficit between 2009 and 2014 exaggerates Spain’s fiscal tightening, because much of it was the reversal of the initial stimulus.

Throughout our work, we report results for samples both including and excluding Greece. The case of Greece is important but it also has unique features: greater uncertainty than other countries in the sample, both in the political sphere, with episodes of street violence and several changes in government, and in its economic policies, with protracted negotiations over reform policies and stop-go cycles in their implementation. (In the full study, we also report results based on ‘robust’ regressions in which observations are given a lower weight in the estimation if they have excessive influence, based on an automated routine.)

Turning to multivariate regressions, we estimate the empirical association between fiscal policy and economic growth, controlling for:

For each sample period, three estimation approaches are used – ordinary least squares, ordinary least squares excluding Greece from the sample, and robust regressions. The estimated coefficient on the change in the cyclically adjusted primary balance ranges between -0.7 and -1.4, and is statistically significant in 8 of the 12 estimated regressions. When Greece is excluded, the coefficient ranges between –0.7 and –0.8. Trading partner growth interaction with the exports share is positive and significant in 9 out of 12 specifications. Pre-crisis growth is positively associated with growth and significantly so in half of the specifications. Real interest rates display the expected negative sign but for the most part are not statistically significant. The change in the real effective exchange rate is not significantly related to growth in these estimations.

Finally, we estimate a battery of multiple regressions in the spirit of the ‘extreme bounds analysis made popular by Levine and Renelt (1992) in which the change in the cyclically adjusted primary balance is always included on the right hand side, as well as all possible combinations of the variables from the list above. A ‘robust’ empirical association (one that passes the extreme bounds analysis test) emerges between fiscal adjustment and economic growth only if one focuses on 2009-14 and if one includes Greece in the sample of countries. In all other cases (2009-14 robust regressions, 2009-14 ordinary least squares excluding Greece, 2007-14 robust regressions, and 2007–14 ordinary least squares), the extreme bounds analysis concludes that the empirical association between fiscal adjustment and economic growth is ‘fragile’.

Baldwin, R, and F Giavazzi (2015), The Eurozone Crisis: A Consensus View of the Causes and a Few Possible Solutions, VoxEU.org, September.

1 For a survey, see Blanchard et al. (2013), Mineshima, Poplawski-Ribeiro, and Weber (2014), and references therein. For the most part, such attempts are not fully convincing or inapplicable to the experience of the global crisis, in which fiscal policy has obviously been influenced by the need to boost economic growth or by the adverse impact of the growth decline on countries’ ability to finance potential fiscal stimulus.

2 The cyclically adjusted primary balance measures the fiscal policy stance (or the discretionary fiscal policy contribution to demand): It is estimated as the primary fiscal balance (revenues minus noninterest expenditures) that would prevail if output were equal to its potential level (i.e., when the output gap is zero).

The secret of productivity growth is not technology

Technology fuels productivity growth but tight labour markets provide the spark. Governments must see such market conditions as a risk and an opportunity.

Economist-less economics: The future of economics in an AI-biased world

Sooner or later, AI-economist machines will replace human economists in many areas. AI bias in economic policymaking can be reduced but will be unavoidable.