How the business cycle affects your career

Workers often build their careers through job-hopping. Over time, they tend to move toward higher paying jobs that last longer (Topel and Ward 1992). These career paths are facilitated by job-to-job flows:1 when a worker has a better offer from a different employer, she will usually quit her job to take the new, better one.

Recent research has sought to better understand how these job-to-job flows translate into enhanced productivity and earnings gains, and how these patterns vary over the cycle.   Economic theories of on-the-job search suggest workers will move up the job ladder from lower-paying, less productive firms towards higher-paying, more productive firms. A corollary implication is that such flows will also be from small to large firms, since theory implies that firms that are more productive will be larger and higher paying. The implied close relationship between firm size, productivity and wages has received some empirical support.2 Theory also suggests these job-to-job flows should intensify during booms implying that one of the costs of recessions is the slowdown of workers moving up the job ladder ( Moscarini and Postel-Vinay 2009, 2012).

In a recent study (Haltiwanger et al. 2015a), we use new measures of job-to-job flows from rich matched employer-employee administrative data to quantify the nature and extent of these flows by firm size and firm wages over the cycle. This new data source allows us to decompose  hires and separations into those stemming from job-to-job flows and those related to non-employment.  We do this by firm wage and by firm size (see Figures 4 and 5 of Haltiwanger et al. 2015a).

The opposite patterns hold for low-wage firms. For these firms, poaching separations consistently exceed poaching hires, and this net loss through poaching is lower during contractions. Low-wage firms gain workers on net through hires from non-employment. These findings highlight that an important cost of recessions is the sharp slowdown in workers moving up the job ladder.

In contrast, the evidence is not consistent with a cyclical job ladder by firm size. Large firms consistently have more separations associated with job-to-job flows than hires, indicating that they are net losers through poaching. Small firms, by contrast, are positive net poachers.  Both large and small firms usually have more hires from non-employment than separations to non-employment. 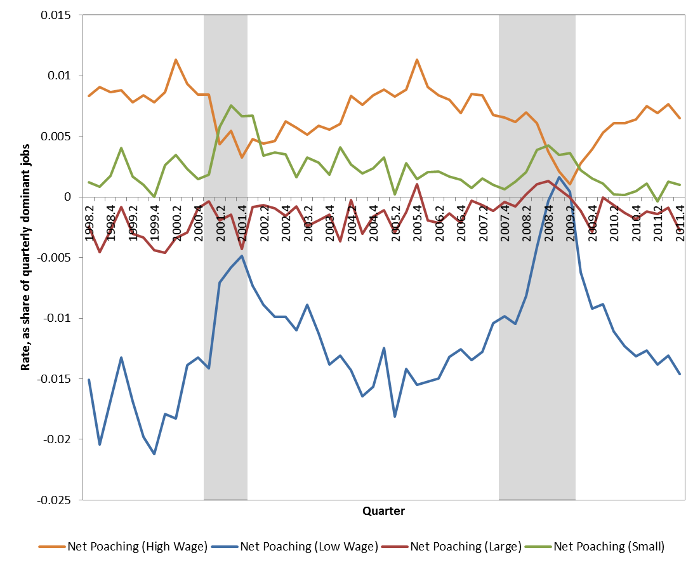 Why are there such different findings by firm size and firm wage? Part of this is because young firms usually start small, and some of those small, young firms turn out to be highly productive and grow rapidly and poach workers away from other firms. It turns out that small, mature firms (those aged ten years or more) lose workers, on net, through poaching while young firms gain workers, on net, from poaching. Additionally, there is an important segment of large firms that offer low wages (e.g. in the retail trade sector). Those large, low-wage firms tend to hire non-employed workers, and this hiring shuts down during recessions. Moreover, workers at large, low-wage firms are often poached away by other firms. Understanding the factors that drive a wedge in the relationship between firm size, firm productivity and firm wages should be an active area for future research. Our findings suggest researchers should be cautious about using firm size as a proxy for productivity and wages in studying the dynamics of the economy.

In recent years, we have learned a lot about how to characterise and assess cyclical job ladders in the labour market. There is clearly a pro-cyclical job ladder among firms by the wages offered. Other evidence in recent papers has found job ladders by firm productivity (Haltiwanger et al. 2015b) as well as across occupations by wages paid and industries by value added (Cairo et al. 2015). The evidence shows that, during labour market downturns, workers tend to stay for longer on lower-paying, less productive rungs of the job ladder.

Moscarini, G, and F Postel-Vinay (2012), “The Contribution of Large and Small Employers to Job Creation in Times of High and Low Unemployment”, American Economic Review 102(6): 2509-39.

2 For evidence that larger firms pay higher wages, see Brown and Medoff (1989).  For a summary of evidence that more productive firms are larger, see Syverson (2011).

Author: John C. Haltiwanger, is a Professor in the Department of Economics at the University of Maryland. Henry R. Hyatt is a Senior Economist in the Center for Economic Studies at the U.S. Census Bureau. Erika McEntarfer is the Lead Economist for the Longitudinal Employer-Household Dynamics Research Group at the U.S. Census Bureau’s Center for Economic Studies.

Image: A man using his mobile phone stands near a glass window at a building at a Tokyo’s business district March 18, 2015. REUTERS/Yuya Shino