How well does China embrace the internet?

What are the key digital behaviours and activity levels in China in 2015? How well are Chinese internet users adopting new information and communication technologies? Recent data sheds some light on the web’s diffusion and adoption in China.

Let’s start with a fundamental trend: internet penetration in China has grown consistently over the past years: from just 1.8% in 2000 to 45.8% in 2015. The online population is now 668 million, with 75% of web users living in urban environments. However, as research by CNNIC shows, the growth of overall internet users has also slowed down this year with only a 0.9% increase over 2014.

The top social network sites in China remain Sina Weibo, QZone, Tencent Weibo, Youku, Tudou and Renren – both in terms of membership numbers and active usage. At the same time, WeChat and QQ Messenger dominate the messaging apps landscape. Almost 95% of Chinese internet users say they are a member of at least one social network site. The most commonly cited motivation for this is “keeping in touch with friends”, which is not surprising at all. 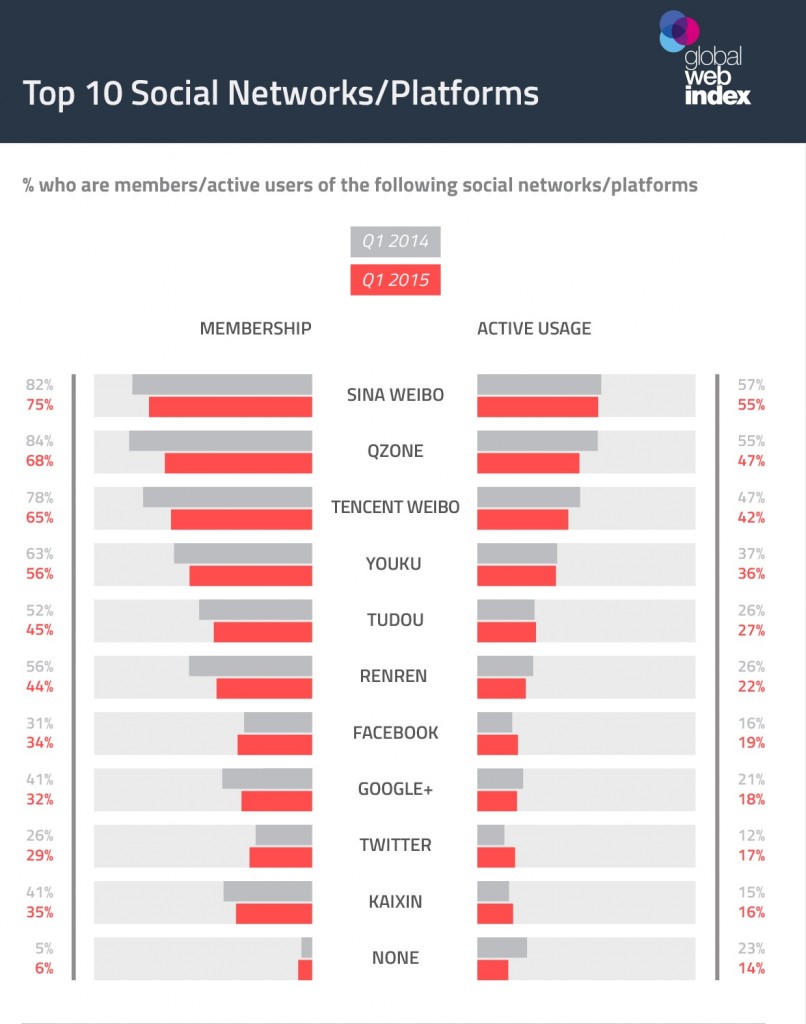 On a typical day, Chinese people spend roughly six hours online, while the share of time spent on a mobile device has substantially increased by 35% over the past three years, rising to an average of 2.25 hours per day. To put these numbers into perspective, US internet users only spend an average of 1.83 hours per day on a mobile device, GWI finds.

There is no doubt that the mobile web is going to grow in cultural and economic significance. Smartphone penetration in China has already climbed to 87%, which is above the global average of 78%. In this regard, mobile technologies have already begun to change how we access, navigate and experience physical spaces. This trend will continue to shape the mobile internet experience in China and around the world. What is particularly interesting about web use in China is that a substantial number of people are using VPNs (virtual private networks) to anonymously access content that is censored in China. According to a recent GWI survey, 148 million Chinese internet users (32% of the Chinese internet population) have used a VPN to access entertainment-related content, restricted websites and social networks such as Facebook and Twitter. The survey also finds that VPN usage peaks among Chinese men who are 25-34 years old and in the top income quartile. 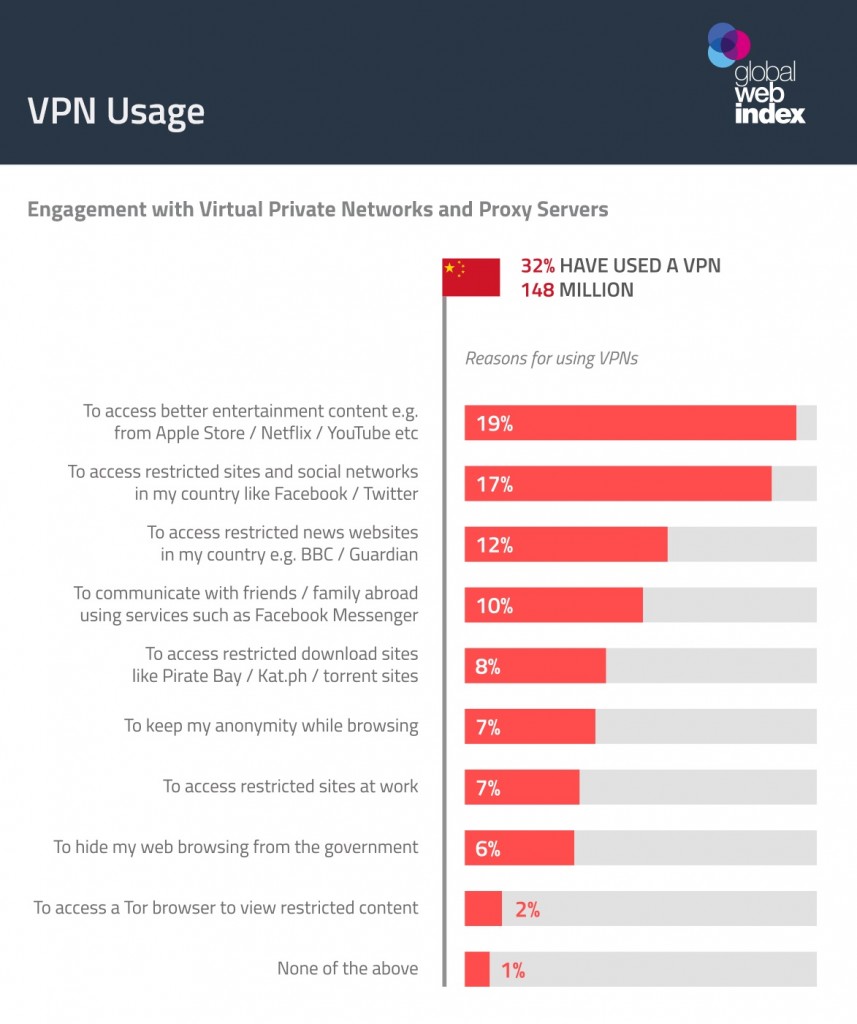 Overall, digital inequalities persist in China. When it comes to web access, there is a disparity between those who are wealthy and those who are not. It raises questions about the skills people need to participate in digital activities in pursuit of public goods in Chinese society. According to GWI, 62% of Chinese internet users have a middle or high income. This situation is best understood through the lens of the digital divide. An academic study by Brady and colleagues (1995) finds that political participation depends on distributed resources – such as time, money and civic skills – which vary between socio-economic statuses and regions. However, digital divides among Chinese internet users affect their ability to participate in such political activities and gain social capital. As a result, most Chinese internet users are going online to view popular culture and leisure. In this vein, GWI finds that the top five interests among Chinese internet users are movies (64%), technology (60%), music (60%), food (54%) and travel (52%). Relatively few users are interested in taking advantage of what the internet offers politically, and this tends to cement and exacerbate existing social and economic inequalities.

Needless to say, this is a trend that can be observed in many other countries around the world. Tackling disparities via infrastructure development, digital skills training and political education will be critical if we are to avoid the danger of a “technological apartheid at the dawn of the information age”, as suggested by the influential scholar Manuel Castells in his seminal 1998 book on the future of the internet. There are still plenty of reasons to be optimistic about China’s internet growth and the exciting new technological innovations that stem from this development.

Author: Vyacheslav Polonski is a network scientist at the Oxford Internet Institute and a Global Shaper at the World Economic Forum. Follow him on Twitter @slavacm

Image: A man talks on the phone as he surfs the internet on his laptop at a local coffee shop in downtown Shanghai November 28, 2013. REUTERS/Carlos Barria