Is China the next Silicon Valley?

For all the recent talk of China’s stockmarket volatility and lower than expected growth, the Asian giant has firmly cemented its position as the world’s second-largest economy, a spot it took from Japan less than five years ago. In fact, if some commentators are to be believed, it could even be on track to dethrone the US, the leading economic superpower.

As we noted a few days ago, the jury is still out on this matter. While the US scores highly on measures such as competitiveness – it ranks third, with China some way behind at 28 – China has made huge progress in other areas, such as its market size and growth. Nothing better captures this progress than the rise of Chinese mega corporations, particularly tech companies. Although Silicon Valley has traditionally produced the world’s largest and most successful tech firms, China is starting to catch up, as this chart shows. 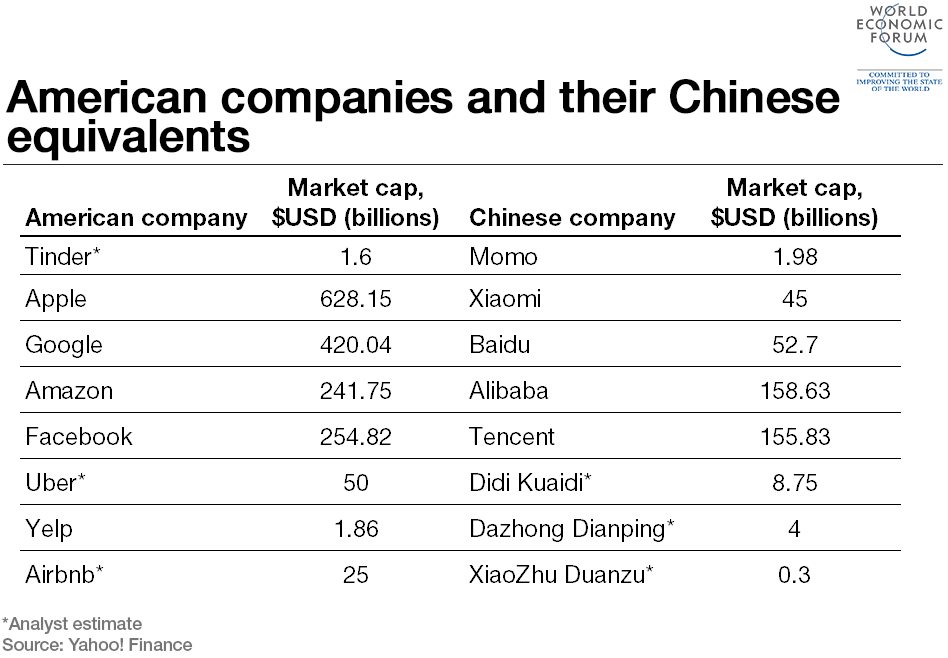 While technology behemoth Apple is head and shoulders above both its American and Chinese rivals, it could start facing competition from a company that few people in the US will have heard of: Xiaomi. By selling high-spec phones at affordable prices, the Chinese start-up – the world’s second-most valuable, after Uber – has become one of the leading smartphone makers in less than five years. After securing the record for most smartphones sold in a single day, it has now set its sights on the US market.

Two of China’s biggest tech companies – Alibaba and Tencent – are also starting to catch up with their US counterparts. Despite sliding share prices, Alibaba still has a competitive edge over its US equivalent, Amazon: its focus on small businesses. Speaking at the Economic Club of New York back in June, Alibaba’s founder Jack Ma said that within the next 10 years, their plan is to “help 2 billion consumers in the world shop online”. Looking at the progress the company has made in a relatively short space of time – just a couple of years ago, few people outside China had heard of it – that goal does not seem unrealistic. As for Tencent, although its American counterpart, Facebook, might be the most widely used social network, the Chinese company still owns three of the five most popular social platforms. It also dominates in its home country, the world’s largest internet market. With internet penetration rates in China still relatively low when compared to the US (in 2013, 45.8% vs. 84.2%), Tencent has much more room for growth, as more Chinese move online.

Perhaps one of the best indications of China’s future potential is the one Chinese company on the above list that is valued higher than its American counterpart: Momo. Although regularly referred to in the US as the Chinese Tinder, it was actually launched a year before the American dating app. While Tinder is available in 30 languages and is used across the globe, from Brazil to the UAE, it still has fewer monthly users: 50 million compared to 60 million for Momo. Those figures point to China’s biggest advantage in the wider internet space: its huge, largely untapped market.

Image: A visitors plays a game on a smartphone at Tencent’s exhibition booth at the Global Mobile Internet Conference (GMIC) 2015 in Beijing, China. REUTERS/Kim Kyung-Hoon

The Times Higher Education survey ranks the world’s universities by global reputation. There’s no change at the top for 2021 - but China has broken into the top 10 for the first time.

Global (CO2) emissions from fossil fuels and cement have rebounded by 4.9% this year, new estimates suggest, following a Covid-related dip of 5.4% in 2020.

Belt and Road green investment that delivers on climate action