The future of Asia’s economies

Watch a full recording of ‘The New Agenda for Asia’ session at the World Economic Forum’s Annual Meeting of the New Champions by using the video player below or following this link. Highlights from the session, including videos, tweets, and top quotes, can be viewed further down the page

The economic outlook for the Asia-Pacific region is strong, with projected growth of 5.6% in 2015 and a very slight decrease to 5.5% in 2016. While the region as a whole is performing well, how are individual Asian countries faring?

The World Economic Forum’s Global Competitiveness Report 2014-2015 measures how well countries are doing in relation to others in terms of productivity. Global country rankings are determined using a comprehensive framework that examines 12 categories, including infrastructure, macroeconomic environment and innovation.

Asian countries performed well in the most recent report, with Singapore, Japan and Hong Kong SAR all taking their place in the top 10. But with countries like China and Korea struggling to stay in the global top 30, is it time for business to take on a greater leadership role in fostering cooperation among Asia’s economies?

At the forefront of this conversation on competitiveness in Asia are topics such as mitigating geopolitical tensions, fostering cross-border finance and investment, and accelerating structural reform. By tackling these issues head-on, Asian countries can look to improve their competitiveness on the world stage. 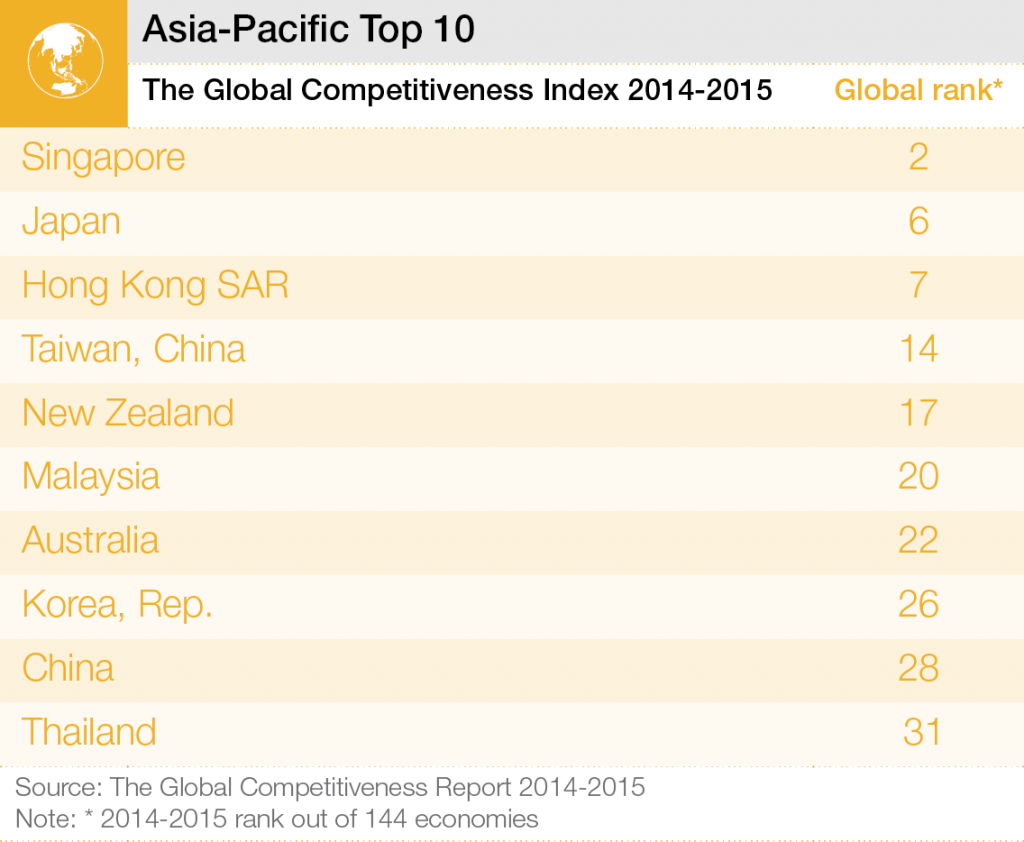 To facilitate better relations in the region, countries could collaborate on mutual problems, such as gender diversity and improving elderly care. China and Korea, for example, can learn from Japan on certain issues, such as how to deal with an ageing society. In addition, collaborating on mutual safety and health standards, and finding ways to mitigate risks and infectious diseases, could add value across Asian society.

Business should work with government to embrace the changes in the economic balance. For many countries in ASEAN, China is the largest trading partner, but trade is still conducted in US currency. Introducing an Asian currency such as the renminbi as the standard for trade would help facilitate relations with China.