Is this the death of America’s middle class?

When Barack Obama made his State of the Union speech in January this year, one phrase kept coming up again and again: middle class. The concept is a part of America’s DNA, with many in the country arguing that a strong middle class boosts economic growth and investment.

But fewer Americans than before are identifying as middle class. In 2008, according to research from Pew, 58% of people in the US did. Five years later, that had dropped to 49%.

They might be on to something. This year, according to a new report from Credit Suisse, China’s middle class overtook America’s for the first time, becoming the largest in the world. “The middle class is so closely associated with North America – and the United States in particular – that some of our results for individual countries may come as a surprise,” the report’s authors note.

Here are the numbers of middle-class adults (in millions), by region and country (2015): 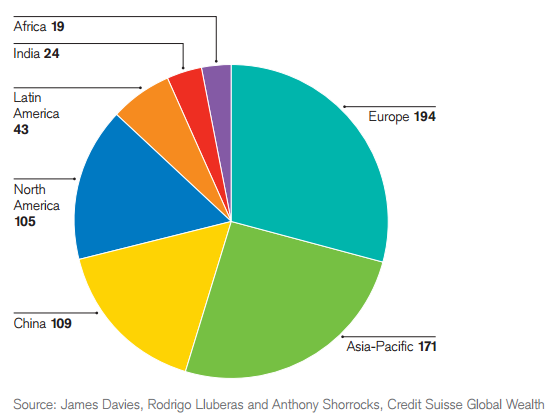 Although China has the world’s largest middle class, this social segment still makes up a rather small part of its population: just 10.7%, compared with 37.7% for the US. But while America’s percentage might look good compared with its Asian rival, it is in fact low for a developed country. In Australia, for example, 66.1% of the population are middle class. In the UK that figure stands at 57.4% and in Canada 47.8%.

Have you read?
Is your income determined by where you live?
What are the key factors affecting US middle-class incomes?
Is America’s middle class doing better than we think?

Author: Stéphanie Thomson is an editor at World Economic Forum

Image: A US flag flies over the skyline of lower Manhattan in New York. REUTERS/Lucas Jackson

A Pew Research Center survey has shown that Black and Hispanic adults in the U.S. are less likely than white adults to say they own a traditional computer.

The US is highly dependent on its neighbours, Canada and Mexico, for trade. The country’s top trading partner is Mexico, making up 14.8% of total trade.

COVID-19: which areas of American life have returned to normality?

How has the population of each American state evolved over the last decade?