The five presidents’ report on Completing Europe’s Economic and Monetary Union in June this year called for European Deposit Insurance to complete the Banking Union. European Council President Tusk also called for completing banking union by creating a European deposit insurance and he argued that this could be done without treaty change. A German “non-paper”, on the other hand, argued that a “discussion on further mutualization of bank risks through a common deposit insurance or an European deposit reinsurance scheme is unacceptable” unless a number of other measures are taken earlier that would render bail-in more likely, reduce the exposure of banks to sovereigns and reduce the link between banks and sovereigns. The non-paper also considers treaty change indispensable.

Reducing the link between banks and sovereigns is indeed a key issue that banking union aims to achieve. In the supervisory dimension, the SSM has already achieved a rather strong separation of banks from national pressures exerted through supervisors. However, one of the reasons for the ongoing debate of national vs European competences in supervisory matters relates to the treatment of deposits in the case of failure. As long as the national governments and national deposit insurances are the back-stops to banks, the link between banks and sovereigns continues to be strong. As a result, national authorities will demand a special role in the supervision of “their” banks. Recent conflicts between Germany’s approach to shift some authorities from the supervisor (i.e. the SSM) to the German finance ministry and the ECB’s assertion of its supervisory mandate are one potential case in point. Banking union therefore remains incomplete. Consequently, banks risk, funding costs, and performance of banks will depend on national policies.

The aim of this blog post is to clarify different options of how to organize European deposit insurance without yet settling on the best option. The policy discussion on deposit insurance is,  characterized by unclear conceptual representations. We aim to explain and to highlight what different options can and cannot achieve. We end by drawing some tentative conclusions on potentially adequate quid-pro-quo measures for different forms of deposit insurances given the problem of transition towards a more integrated banking market (transition problems) and potential further harmonization of other national policies.

A key issue to consider is whether and to what extent a European Deposit Scheme mutualizes risks of losses on depositors across borders or merely serves as a credit line to various national deposit insurance schemes.   Risk sharing across borders is important to ensure that funding conditions for banks across the EU do not depend too much on the location of the bank.

Funding costs for banks, i.e. deposit rates, are therefore different across euro area countries. The chart shows the standard deviation of deposit interest rates normalized by the German interest rate on deposits. (It is a coefficient of variation where the normalization is the rate of the large country with the lowest rate. Normalization with the average rate shows even an increase in the coefficient of variation but is misleading as since the decision to start banking union, deposit rates have come down in the periphery, driving down the average rate). It has come down in the last years but it is still higher than in the pre-crisis years. This suggests that location of banks in the euro area is a significant factor determining the riskiness of banks’ deposits. The debate on deposit guarantees is also quantitatively important. Deposit in different euro area countries often exceed 100 % of GDP. Also covered deposits amount to very significant percentages of GDP as can be seen in the chart below. The magnitude of such deposits also renders it obvious that build-up insurance funds can only partly cover losses in case one of the large, systemic banks with a large deposit base suffers from massive losses. This is why deposit insurances rely on explicit or implicit fiscal backstops.

Total and covered deposits as a percent of GDP in 2012 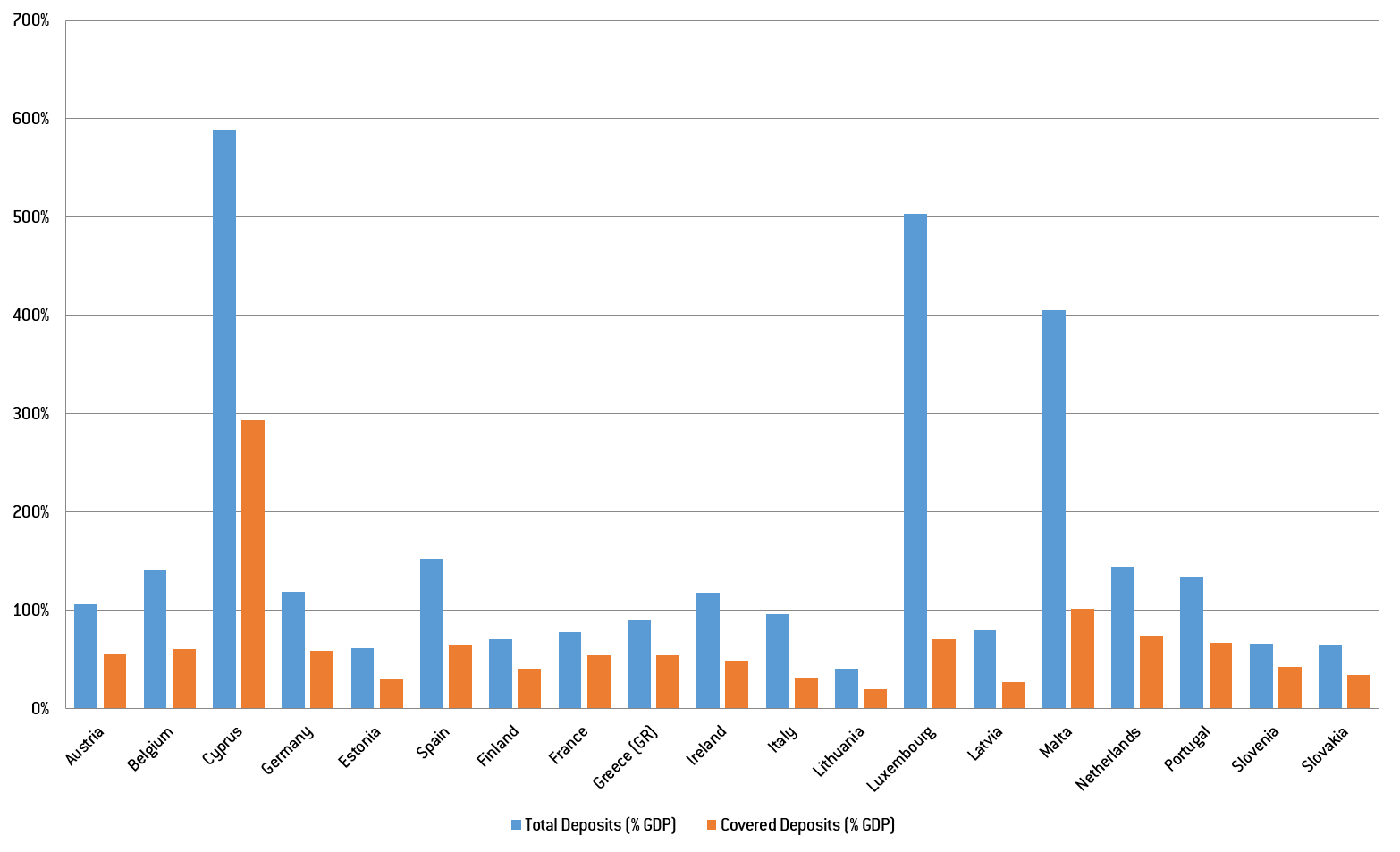 Against this background, we discuss the following proposals. So how do these schemes compare overall? We do not consider options A and B as a European deposit insurance scheme. Rather, they constitute credit lines that enhance the credibility of the national deposit insurance schemes but they do not insure risks other than liquidity risks across borders. Markets would still differentiate between a bank’s country of origin. Banks from countries with weaker government finances would pay higher funding costs. Our contention is that this differential will remain in the first two proposals, as the deposit insurance arrangements remain basically national. Moreover, the governments will still want to top up the single supervision of the ECB with national supervision, because of the exposure of the national deposit insurance scheme to a domestic bank failure.

A deposit re-insurance scheme, however, has a number of advantages and disadvantages. The advantages of this scheme are clear. It would recognize that currently some banking policies remain national. The first loss would remain  with the national schemes in order to reflect the fact that some national policies matter for bank performance. For example, loan-to-value ratios for mortgages differ across Europe and thus influence the riskiness of mortgages on bank balance sheets. The disadvantage, however, is that country differences for banks would remain significant. In particular, national supervisors would rightfully want to have a special supervisory relation with the banks for which their national deposit insurance would have to take the first loss.

Moreover, the percentage that is national in the insurance is an important variable driving the effectiveness of the scheme. If the national percentage is high, significant differences between countries’ banking systems would remain, in particular as the national depositors would have the responsibility of re-financing the fund after a bank rescue. In fact, a large national component could even introduce an element of significant vicious circles as the failure of one bank would make deposits in other banks more costly due to the increased levy. In contrast, if the national first-loss tranche is rather small, the system moves closer to a system in which it resembles a European deposit insurance, option D.

By contrast, the fourth proposal would provide for Eurozone wide risk sharing. In that way, bank funding costs would still be different according to a bank’s solvency position but no longer by its location of headquarters. The advantage of such a scheme would be that the quality of deposit insurance would be equalized across countries. Such a scheme would also best correspond to a centralized supervision by the SSM and could be compulsory for all the banks directly supervised. However, the scheme would also require that other national policies cannot be used in a way so as to free-ride on the European insurance, creating potentially significant moral hazard problems.

To conclude, a genuine banking union that fulfils the aim of “breaking the vicious circle between banks and sovereigns” would require option D. This option, however, raises questions as regards transition problems as well as governance when some national policies remain in place. Before providing such a full European deposit insurance, it is certainly necessary to reduce the national sovereign risk on banks’ balance sheets, for example by introducing some form of large exposure rules. Also, a full European deposit insurance would require a European fiscal backstop.

In contrast, option A and B would not per se justify any move in the direction of large exposure rules as the national sovereigns remain the ultimate back-stops.

Author: Dirk Schoenmaker is Senior Fellow at Bruegel. Guntram Wolff is the Director of Bruegel since June 2013.

Governments are boosting spending to support those who have been most affected by COVID-19. The pandemic could lead to a new consensus on the welfare state.

You’ve got money: Mobile payments help people during the pandemic

IMF: These 3 charts show how lockdown has affected the global economy