How can we keep creating jobs in turbulent times?

The world of jobs and labour markets is in disarray. Unemployment is high in many countries, especially among the young. At the same time, many companies report having trouble finding the workers they need with the required skills. Record numbers of people are going into retirement, but would prefer to work, at least part time. Information technology has both displaced workers and created new jobs. And there are myriad apps and websites that help workers acquire new skills, search for jobs, and find other useful information. Why are we getting so many conflicting signals about skills, jobs, and the labour market?

We are living through a series of talent wars. Companies scramble to adapt to changing market circumstances, and they need to reinvent themselves, including hiring new employees with different skills than existing employees. Governments and NGOs also struggle to attract talent in competition with the private sector, which offers better pay and working conditions. And many people feel that the global economy is taking away jobs from them because there always is someone else located somewhere else in the world willing to do the job for less pay. What might be the outcome of these talent wars? 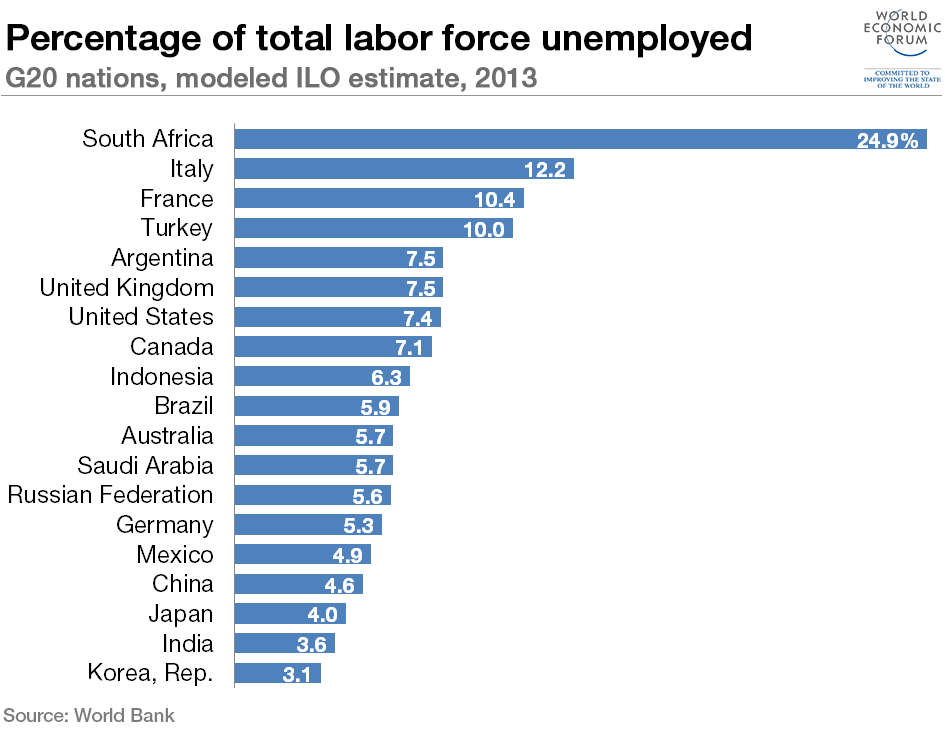 The conventional wisdom holds that it is during times of turbulence and crisis that problems become readily apparent. Obviously, the crisis in Europe, the slow recovery in the United States, and the rise of the emerging economies are exposing many issues in the labour market that had not been addressed in the past. It is also the case, however, that we have never had so many highly educated people in the world. Moreover, the mobile revolution and social media make it easier for people to acquire new knowledge, to access information, and to get work done. Why do we continue to see a yawning gap between people’s skills and the requirements of this rapidly-evolving global economy?

Part of the problem lies with the educational system. It used to be more effective not only at educating and training new generations but also at sorting them into promising career paths. Unfortunately, schools and universities have not changed much over the last 30 years. They continue to rely primarily on old-fashioned ways of selecting their students, designing their programmes, and delivering them. While online education and training has taken off in the corporate world, universities continue to resist it. Cost inflation is also severely affecting the accessibility of high-quality education for most of the population. The future is bleak for traditional educational institutions if they do not adapt to the new realities of the global economy and the mobile revolution.

One of the most severe problems confronting contemporary societies is what to do with the tens of millions of people who are entering retirement each year at a time when the average person in the developed world is expected to live 78 years, and in emerging economies 70 years. In the case of women, life expectancy is 7 or 8 years greater than for men. People above age 65 may be affected by cognitive decline, but they have useful skills and a wealth of experience.

It does not make any sense financially, socially or economically to relegate them to retirement when they could be playing an active role in the economy and perhaps enjoy their free time more fully if they could work part time or for a few months during the year. In order for us to tap into this amazing source of experienced labour, we need governments to change laws and regulations, and companies to think creatively about how to use part time employees more effectively. Needless to say, such a move would also release some of the pressure on pension systems.

Young people present a different set of challenges. The population between the ages of 16 and 30 is split into two very different groups in most countries. On the one hand, we find highly-educated individuals who sometimes find it hard to find jobs commensurate with their skills and thus join the ranks of the underemployed. On the other, we find young individuals who did not have the opportunity to get an education or dropped out of school. The policy options are different for each of these groups. Clearly, economic growth and dynamism are required to address the burning issue of youth unemployment and underemployment in Europe, the Middle East, and parts of Africa. In some countries, we run the risk of losing an entire generation of young people because policymakers and companies are too shy about experimenting with new ideas, concepts, and schemes.

The huge wave of technological change that has propelled the global economy into a brave new world of distributed manufacturing and digital business has put many people between the ages of 50 and 65 out of work. After losing their relatively well-paying jobs, they have either retired prematurely or gone into much less attractive occupations. This represents an enormous challenge because it is not easy to retrain large numbers of people displaced by new technology. Both governments and companies have a responsibility to produce solutions, which must necessarily entail spending on education and training, and redesigning jobs to fit their skills.

The feminist revolution has finally started to have an effect on the labour market. While gender-based discrimination continues to be a problem, one sees increasingly large numbers of women occupying important jobs. Women are either the primary or the sole earner in about 40% of U.S. households with at least one child under the age of 18.

It is imperative to continue capitalizing on this trend. Women are increasingly attending college and obtaining better grades. This is good for them, for their families, and for the global economy. A more diversified and deeper talent pool will surely create a foundation for sustainable economic growth. One must remain vigilant, however, about overt and latent forms of gender discrimination if we are to realize this potential fully. The same goes for discrimination based on race, ethnicity, religion or sexual orientation.

Finally, the most important and urgent aspect of the talent wars has to do with immigration policy. It is unfortunate that precisely when we need more mobility across borders we are witnessing a spike in xenophobic attitudes and politics. Governments and civil society must exercise leadership and help the public understand that immigration can be an engine for social and economic progress. The global economy is becoming increasingly borderless. However, the nation-state system we have inherited from past centuries continues to establish way too many restrictions on the free movement of people, many of which are counterproductive.

In sum, the talent wars will not abate until governments and companies address a formidable set of issues involving education, the opportunities for the young and for the elderly, the aspirations of women, and the virtues as well as the challenges of immigration. These are politically controversial topics. The problems cannot be overcome and the opportunities cannot be realized without firm political leadership, without massive change in our attitudes and mindsets.

Author: Mauro F. Guillén, Director of the Lauder Institute at the Wharton School