How global debt has changed since the financial crisis

Debt levels have been a subject of constant news in the years since the financial crisis — from the sub-prime housing crisis in the United States, to the eurozone sovereign debt crisis, to the dramatic increases in debt evident in emerging markets now.

Graphs produced by analysts at Bank of America Merrill Lynch show an astonishing acceleration in global debt levels, and demonstrate just how little de-leveraging there’s been since the 2008 financial crisis (none). They say its evidence that “the world is still in love with debt.”

After 30 years of relative stability from the early 1950s to the early 1980s, something changed, and debt started ramping up:

Debt then took a rapid step up in the mid-1980s, and another in the late 1990s. Over the last 30 years or so, global debt has risen by around 100% of GDP — so it hasn’t just grown in total terms, but has massively outstripped the economic expansion over that period.

In some developed economies, like the United States, the United Kingdom and Ireland, there’s been some deleveraging since the financial crisis, particularly by households. But that’s been more than offset by increases in emerging markets.

The total stock of global debt, even excluding debts held by the financial sector, is up by more than $50 trillion. That’s an increase of more than 50%. 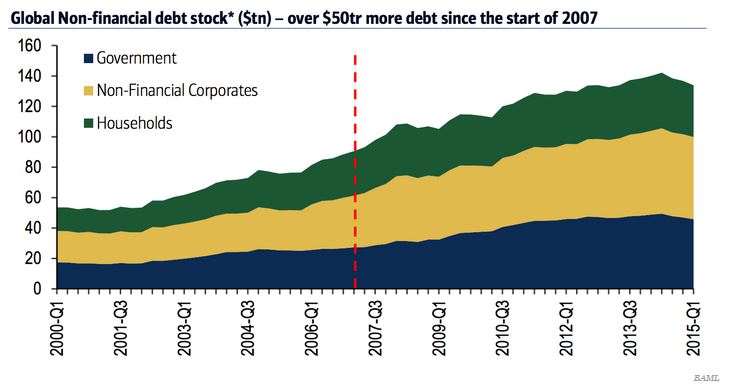 Household debt has ticked up a little, and government debt has expanded as states attempted to stimulate their economies in the aftermath of the financial crisis.

But the main increase has been down to non-financial corporate debt, which has risen by 63% over the period, largely in emerging markets. Recent analysis by Australian investment bank Macquarie shows an astonishing leap in debt among Chinese commodity companies over the last 7 years.

Looking at these sort of charts, it’s clear to see why economists like Ken Rogoff are so concerned about global debt levels. In the Financial Times earlier this month, Rogoff argued that a debt hangover is a better explanation of the world’s slow growth than a prolonged demand deficiency, often called secular stagnation. Here’s Rogoff:

Actually, there can be little doubt that a debt super cycle lies behind a significant part of what the world has experienced over the past seven years. This resulted first in the US subprime crisis, then the eurozone periphery crisis, and now the troubles of China and emerging markets.

Analysts at Goldman Sachs recently referred to the challenges currently faced by debt-laden emerging markets as the “third wave” of the financial crisis.

Inflation: The products with the biggest price increases in the United States

The inflation rate in the US has seen its fastest annual increase in over 30 years, with fuel, transportation, and meat products seeing some of the steepest increases.

Digital currencies are cutting across borders. Here's how regulators can catch up

Explainer: What is a DAO - and how did one of them almost succeed in buying the US Constitution?