How have food prices changed over the last 15 years?

Global food prices have been declining for the last 4 years, despite an overall rise since 2000.

The FAO Food Price Index is a measure of the monthly change in international prices of a basket of food commodities. It consists of the average of five commodity group price indices (meat, dairy, cereals, vegetable oils and sugar), weighted with the average export shares of each of the groups for 2002-2004.

The following line graph shows the yearly average price for 2000-2015 (latest available figure is from September 2015). 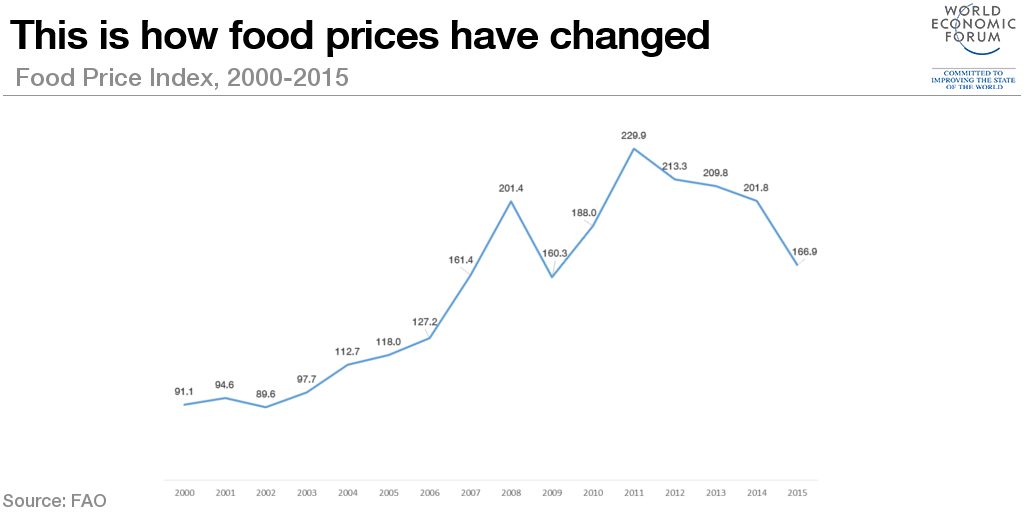 The FAO attributes the declining price of food globally to high inventory levels, lower oil prices and the renewed strength of the US dollar. They believe none of these factors are likely to be reversed in the short term, and so lower prices are likely to continue – barring shocks, such as poor harvests.

Monitoring and analysing food prices is vital for food security and for tackling and preventing famine, malnutrition and undernourishment. To increase awareness of global food production and scarcity, 16 October is World Food Day, a Food and Agriculture Organisation (FAO) event.

Beekeeping farmers in Viet Nam are earning more and tackling climate change by helping to regrow coastal mangrove forests in a UNDP-backed project.

Adding a gene encoding to both rice and potato plants increased their yield by 50% in field tests, with the plants growing significantly larger with longer roots.

What can the wine industry teach us about sustainability?

This is the current state of global food prices

Can you eat to save the climate?