Is the business world ready for today’s security challenges?

The spread of violent extremism, uncertainty about the future of the European project, China’s global ascendance, the Iranian nuclear deal, the restored Silk Road, the Russian invasion of Crimea, tensions over Syria, the mass exodus of refugees, the expansion of regional trade agreements, the changing nature of military power… These are only some of the causes of increasing uncertainty around international security, which are challenging long-standing economic and political relationships and raising new questions for industry.

Traditionally, the private sector’s response to geopolitical situations has essentially been to view them as intractable external situations, seeking to minimize downside risks while hoping it will all blow over. According to a 2011 study by Wharton Business School, the geopolitical risk strategy favored by most companies is to “avoid investing” in volatile places, followed by “diversification”.

However, as the world becomes more hyperconnected, such strategies become less and less effective. Volatility in one place can quickly impact others – and avoiding investment in potentially volatile places may be tantamount to leaving money on the table. The private sector needs to understand the new security reality and identify how best to build resilience while leveraging potential opportunities. The CEO Report, a collaboration between Said Business School and Heidrick and Struggles, uses the term “ripple intelligence” for what is needed: the ability to analyse the interaction of various geopolitical drivers is like anticipating the effects of ripples on a pond caused by the dropping of multiple stones, while also understanding that one’s own actions may constitute one such stone. To start with, companies which have identified the top 3-5 drivers of security in the regions where they operate, and the links between them, are more prepared to develop their responses.

Moreover, there is growing potential for industry to play a role in how international security situations evolve. The private sector cannot replace the role of government, but – along with civil society – it can contribute towards building powerful checks and balances to make government action more effective.

Executives are well aware of the increasingly difficult international security landscape. According to Mckinsey’s Economic Conditions survey in June 2015, 72% of surveyed executives cited “geopolitical instability” as the number one threat to global growth. However, most companies are still not set up to understand the underlying issues or figure out how best to respond. Different departments in a company often have different priorities and risk management policies; company leaders may therefore be faced with choosing between competing approaches to addressing a risk, such as adopting a pure compliance approach or contending with it as a strategic issue which requires more proactivity. 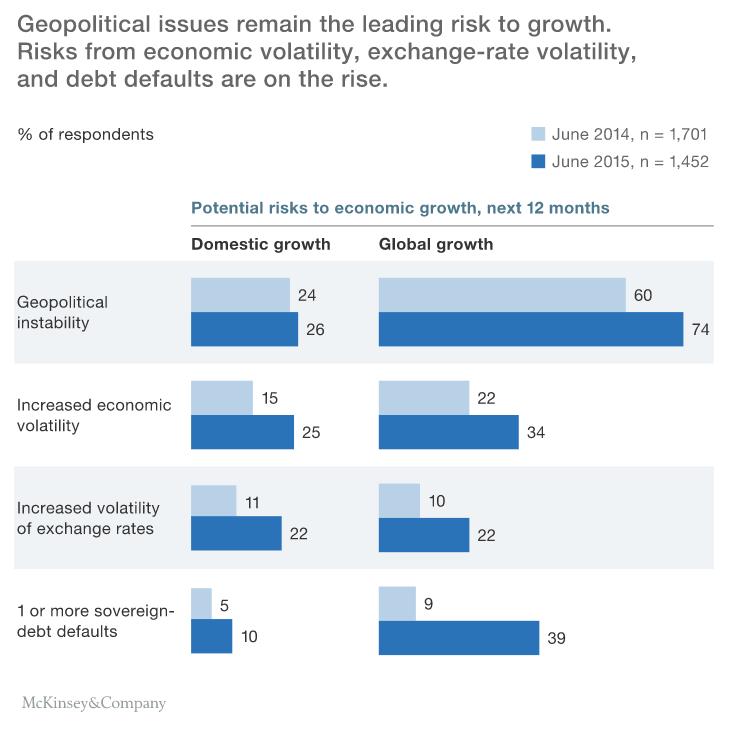 What is true of companies is also true of many governments, global institutions and international civil society. Public and private sector leaders alike are hardly short of immediate challenges to grapple with, and often have a hard time in going beyond short-term thinking to invest in an analysis of the interconnections among issues that loom on the horizon – from demographic shifts to emerging technologies – which could reshape geopolitical realities.

Many of the drivers of geopolitical instability are ones which companies already must deal with, such as ineffective governance, corruption, pollution, poverty, and mismatches between the skills demanded by the modern economy and those which workers possess. To the extent that companies address these drivers to protect their own interests – think of a mining company seeking to minimize environmental impacts on local communities, train local workers in employable skills and work with local government to improve public services – they are also contributing towards addressing drivers of geopolitical instability. There is a clear value in all stakeholders pooling their respective resources, to improve preparedness and response.

The effectiveness of such work can be greatly enhanced through partnerships, with other companies and industries, governments and civil society, who often have unique insights into local forces that could drive instability. However, a recent expansion in the number and type of partnerships which companies need to operate is placing more and more demands on companies in terms of time, money and diverse expertise. We need new models of partnership to improve the security landscape, partnerships founded on common interests, clear expectations and trust.

The value of integrity and trust, in particular, is often underestimated. Companies can invest more in building and incentivizing integrity and transparency, exploring models ranging from cross-sectoral and peer-based audits to enhancing supply chain liability and becoming more locally-rooted in communities where companies operate, a strategy which is increasingly recognized as an important hedge against unrest. Governments also need to act, as company initiatives can go only so far in economies where corruption plagues the public sector.

This will require a change in mind-set of all parties, starting with shared agreements on the role companies can play, and clear expectations: for example, how should companies deal with extortion faced by their contractors? What is a company’s responsibility for reskilling workers it makes redundant? How can a firm facing protests ensure the security of its site and employees, while conserving good relationships with the community? In case of a cyber-security breach, how can a company share information with authorities while maintaining the privacy of its customers?

New partnerships on security issues are gradually emerging. In Colombia, for example, firms operating in high-risk areas have negotiated memoranda of understanding with government security forces. In Africa firms operating in the natural resource business have adopted a “be local” strategy, by, for example, giving local communities shares in the ownership of the mine. Global professional companies are looking at ways to boost peer audits to foster greater transparency across the value chains of business to build trust. Financial institutions and law enforcement authorities have partnered in the use of data-analytics to identify human trafficking activities. Retail and consumer goods companies are taking steps to address the heightened risks they face from terrorist attacks.

With a stronger understanding of the issues and their evolving role in the geopolitical landscape, the private sector can be a constructive partner in addressing global security challenges: by resisting political complacency, reinforcing social cohesion, and raising the bar on integrity and transparency. The World Economic Forum is partnering with businesses and governments to  explore opportunities to make this happen.

Have you read?
Cyberspace: the new frontier in warfare
8 emerging technologies transforming international security
What will militaries of the future look like?

As the Edelman Trust Barometer finds business is more trusted than government, rebuilding trust should be at the top of everyone’s agenda in 2022, writes Matthew Bishop.