Q&A: Are robots taking over the world?

There are three answers to that question. Artificial intelligence experts Cori Lathan (CEO of AnthroTronix) and Stuart Russell (Professor of Computer Science, University of California) talk to us about everything from pet robots to prosthetic memory, as part of an interview series for our Summit on the Global Agenda in Abu Dhabi.

Recently many movies have featured robots – which are your favourite robots and why?

Cori Lathan: Baymax from Big Hero 6 – especially its empathetic side. Baymax could both physically and emotionally assess the humans around it and provide appropriate physical and emotional support.

Stuart Russell: TARS from Interstellar. TARS had a versatile form factor, an unobtrusive personality, and did exactly what was needed to help the humans, including sacrificing itself. 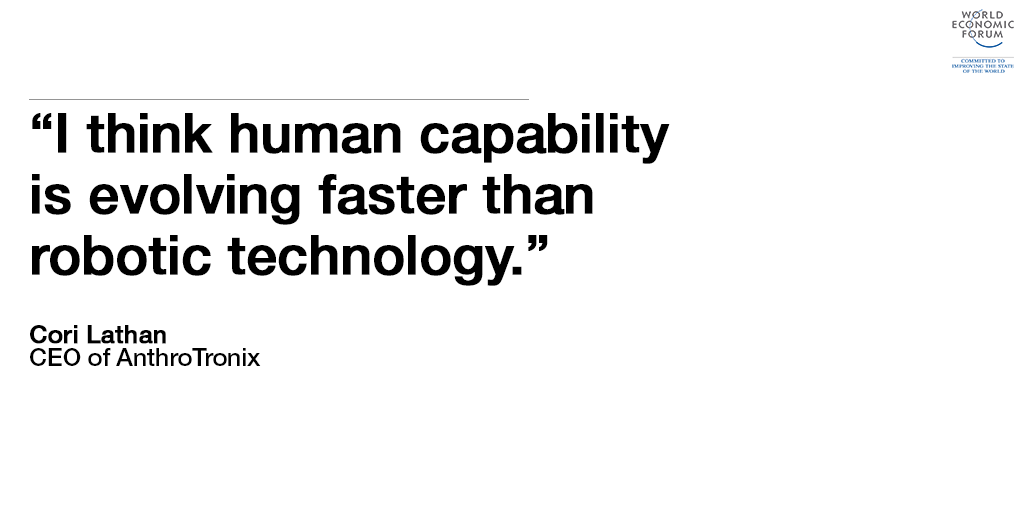 What are the most innovative applications you have seen of artificial intelligence or robotics in the past 12 months?

CL: Earlier this year the Qualcomm Robotics Accelerator accepted its first class of start-up companies and the breadth of robotic technology applications was remarkable. There were two drone companies (as you might expect), two toy companies (one for humans and one for animals!), a solar-powered robotic lamp, modular hardware and software open source tools, and more. Innovation in robotics is exploding as hardware issues are resolved and sensing becomes highly accurate.

SR: The last 12 months have seen hundreds of research groups and companies around the world trying new applications of deep learning. Not all of these applications make sense but a very interesting one is automated captioning: writing text captions for images, such as “A small girl sitting on a sofa holding a doll”. Such captions make billions of images much more searchable; now we just have to improve the accuracy of the captions.

In the coming five years, what areas of our life will most be impacted by AI or robotics?

SR: Self-driving cars – assuming they can iron out the bugs – will have a huge impact: mobility for the elderly and disabled, feeder systems for public transportation, taking kids to school, massively expanded vehicle sharing, and no more need for parking lots everywhere. Another big change will occur when automated personal assistants and search engines start to really understand the text and speech information to which they have access. Assistants will become dramatically more useful if they understand all your emails, texts, and phone calls, and search engines will be like smart librarians who have read every book ever written.

CL: As we create an “internet of things AND people” using technology like Amazon Echo and Houndify, we will have a new generation of smart homes, which provide voice activation of connected apps and devices (e.g., TV, coffee maker). These technologies will also move into the workplace, increasing efficiency as well as changing our relationship with the environment and those we interact with.

What are the next technological breakthroughs in this field?

SR: We might see early versions of domestic robots for limited tasks, but I think we’ll have to wait more than five years for widespread impact.

CL: The application of AI methods to Health Data Analytics to solve big health problems particularly as they related to non-communicable diseases.

Are robots taking over the world?

SR: There are three timescales and three versions of this question, and the answers are “Not if I can help it”, “Quite possibly, but hopefully in a good way” and “We would be crazy to be complacent on this issue”. In the near term, autonomous weapons in the hands of unpleasant humans are a real threat, the UN is working (slowly) towards a treaty banning them, and our council has been active in building support for a treaty within the profession and in the media. In the medium term, will robots take away all of our jobs? Some experts say yes, and economists recommend more unemployment insurance as the solution. Better ideas wanted!

But the real world-changing questions are further off, when, after several intrinsically unpredictable breakthroughs, we have human-level or superhuman AI. See, for example, Elon Musk’s comment that superintelligent AI poses the greatest existential threat to the survival of the human race. His point was that regulatory oversight at a national and international level is needed to responsibly develop technology. In my view it’s too soon to start designing regulations – on equations?? – but not too soon to start solving the technical questions of how to maintain absolute control over increasingly intelligent machines.

CL: Yes, but WE are the robots. I think human capability is evolving faster than robotic technology. For example, I plan in the next decade to have better than perfect knees, eyes, and memory through embedded neural–robotic technology. As was pointed out in the Second Machine Age, it is likely that we will also work more effectively as human-robot teams then either one alone. So a different question might be – Is it OK for the world to be taken over by a superior human-robot team, as long as it’s OUR human-robot team?

At the end of your council’s two-year term, what do you hope to cite as your achievements?

Our council has three primary objectives that we’ve been working towards:

Image: A member from a German team adjusts a humanoid robot during the 2015 Robocup finals in Hefei, Anhui province, July 22, 2015. REUTERS/Stringer

The same advances in tech that have boosted our predictive capability have also made the task much more complex. To resolve this, we need a paradigm shift.

Robot Chef Trained To Taste Food As It Cooks

Unpacking AI Procurement in a Box: Insights from Implementation

AI Procurement in a Box: Lessons in best practice from Brazil

AI: This is why the developing world is far behind – and that’s a problem for all of us