Where are the world’s oil rigs?

In September, Royal Dutch Shell announced it had abandoned Arctic explorations. The Anglo-Dutch company said the oil and gas it found in the Burger J well off the coast of Alaska was “not sufficient to warrant further exploration”.

The low price of oil is putting pressure on fossil fuel companies such as Shell to drop many of their speculative operations. While environmental groups like Greenpeace called the move a “defining day for the Arctic”, many remain cautious that low oil prices will encourage the further use of fossil fuels in general.

Today, there are 1,470 offshore oil rigs around the world. The chart below, based on data from Statista, shows where they are located, as of May 2015. 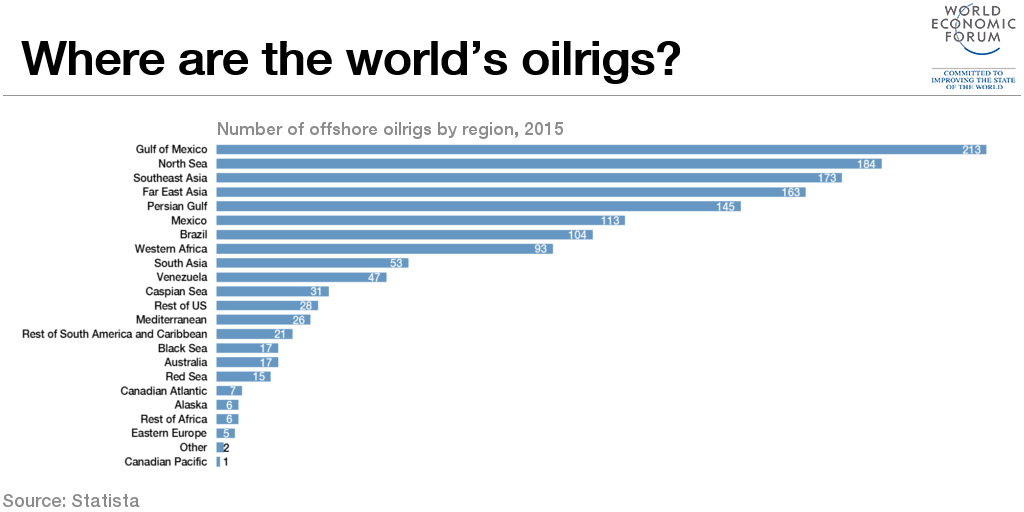 Seven regions have more than 100 oil rigs, which can be broadly divided into four areas.

In the Americas, alongside the chart-topping Gulf of Mexico (213 rigs), the waters around Mexico and Brazil have 113 and 104 rigs deployed, respectively.

In Europe, the North Sea has a high density of offshore oil extraction, with 184 rigs shared between the United Kingdom, Germany, Denmark and Norway.

Far East and South-East Asian fields take the third and fourth spots, with 173 and 163 rigs each. The Persian Gulf has the highest density of all, serving the Gulf States and Iran with 145 rigs.

Have you read?
What drives oil prices?
3 reasons for the oil price drop
Where does America’s oil come from?

Image: An aerial view of the Oseberg oil platform in the Norwegian sea. REUTERS/Helge Hansen

The war in Ukraine has exacerbated the global energy crisis and the IEA has outlined a 10-point plan to cut oil use. But to make it work, people and governments will have to make smart ch...

Africa’s economic growth is likely to fall this year because of surging food and fuel prices caused by Russia’s invasion of Ukraine, according to the IMF.

Russia is one of the world’s largest exporters of petroleum products - but what exactly are they?

The 1973 energy crisis sparked the idea for establishing the IEA. What have we learned since?