Where’s the best place to be a woman?

“There has never been a better time in history to be born female,” said US presidential candidate Hillary Clinton at this year’s Women in the World Summit. If she were to land the top job, she’d be America’s first female president, but many other countries are already there, with female heads of state in places such as Brazil, South Korea and Liberia. In two countries – Rwanda and Bolivia – there are now more women in parliament than men.

Away from the higher echelons of power, there has also been progress. In five of the world’s nine developing regions, gender parity has been achieved in primary education. In Europe and Central Asia, the share of women’s employment in the non-agricultural sector is almost equal to men’s.

But as this infographic from The Guardian shows, we’re still a long way from achieving full gender parity. It uses data from the World Bank and the United Nations to provide a snapshot of women’s rights around the world, covering legislation on everything from violence, reproductive health, property and employment rights.

Some of the findings are quite shocking. In the Middle East and North Africa, for example, only Morocco, Lebanon and Jordan have laws that specifically address domestic violence (there is no data for the United Arab Emirates and Oman). In Chile, an OECD country, married men and women do not have equal property-ownership rights. And in countries such as Poland, Italy and Denmark, there is no law banning gender discrimination in the hiring process.

Explore the data in full with the Guardian infographic. 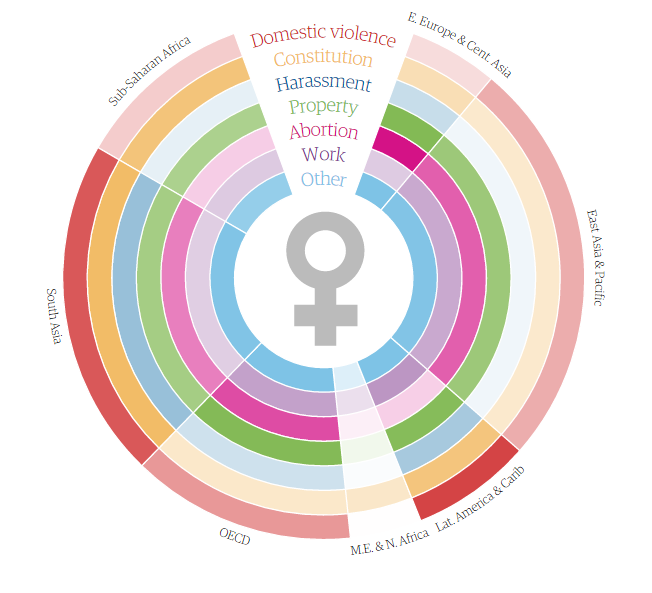 Have you read?
15 women changing the world in 2015
Which countries have the most women in parliament?
How educating girls can transform communities

Author: StéphanieThomson is an Editor at World Economic Forum

Image: A girl smiles as she walks after visiting the Sakhi shrine in Kabul March 26, 2014. REUTERS/Zohra Bensemra.