Which African countries produce the most coffee?

You saw it last year with oil: When prices began to fall, Saudi Arabia, the world’s largest exporter, ramped up production to protect its market share, instead of going the conventional way and holding back production to drive prices back up.

Now the same scenario is unfolding in the coffee market – coffee futures fell the most in seven months after Colombia announced that it would increase exports in the face of low global prices, to protect local farmers’ earnings.

The ongoing El-Nino drought in South America has lowered the quality of Colombian coffee, the third-largest producer after Brazil and Vietnam, and Colombia is trying to sell off as much as it can of the remaining good harvest.

Arabica coffee has posted the largest decline among 22 raw materials in the Bloomberg Commodity Index, dropping 24% this year; Robusta coffee has similarly fallen 16%.

It means that African coffee producers – such as Ethiopia,  Ivory Coast, Uganda, Kenya, Rwanda and Tanzania – might be hit by even lower revenues from their coffee exports, coming at a time when they desperately need to earn some hard currency to shore up their sliding currencies.

Even worse, for eastern Africa, El-Nino is expected to cause heavy rains and moderate to severe flooding in the next few weeks, which may decimate earnings even more this year.

Early this month, coffee-industry authorities in Uganda and Kenya said heavy rains may damage the crop during this year’s October – December rainy season. Funguses such as Coffee Berry Disease could become rampant because of excess rain, while farmers may struggle to keep up with weeding and pruning, said Grenville Kiplimo Melli, the interim coffee director at Kenya’s Coffee Directorate.

In the long-term, however, there’s expected to be a surge in global demand for the beans: Global coffee consumption will increase by a third to 200 million bags by 2030, as population increases and disposable incomes rise.

But in the face of global price fluctuations, Africa’s key selling point might be in developing its own internal market for what are some of the world’s finest quality beans.

The growth of domestic consumption of coffee and of local coffee retailers could revitalise Africa’s coffee sector and overcome its perennial problems, says this industry brief by Ecobank (pdf). The continent accounts for about 12% of the world’s production, but its beans are much prized by coffee connoisseurs. 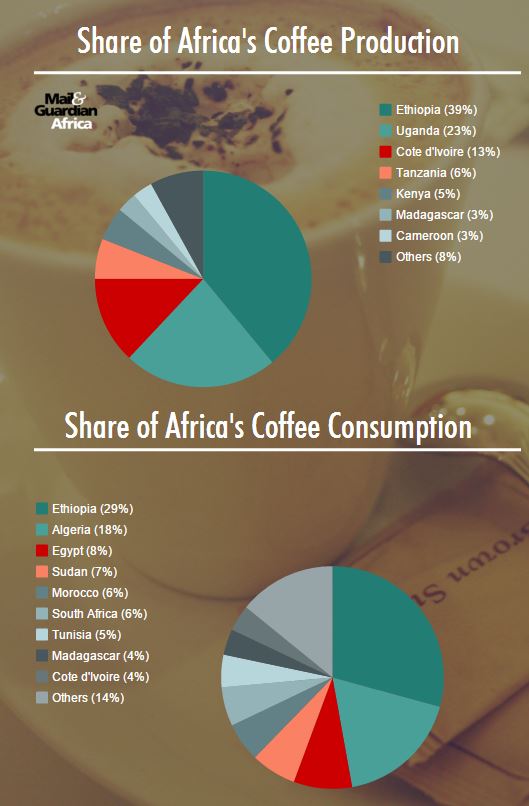 Ethiopia, which is the origin of Arabica coffee, is renowned for its unique Yirgacheffe, Sidamo and Harar Arabica varieties, while Kenya’s fine Arabica beans grown at high altitude near Mount Kenya are in equally high demand.

However, with the exception of Ethiopia, Africans drink very little coffee. As a historical cash crop, coffee has been grown for export while many African producers, notably Kenya and Uganda, have predominantly tea-drinking cultures.

Per capita coffee consumption is low, with leading consumers – Ethiopia (2.27 kg), Madagascar (1kg) and Cote d’Ivoire (0.9kg) – still well below other emerging markets, such as Brazil (6kg) and Algeria (3.2kg), the data from Ecobank shows. By contrast, the EU consumes nearly 9kg per person.

Dorman’s is the standout local player, with a presence along the entire coffee value chain, from regional bean sourcing to roasting and retail. Global coffee giant, Starbucks, has also set its sights on the continent, announcing in July a deal with its local franchise operator, Taste Holdings, to run Starbucks cafes South Africa for the next 25 years.

Image: Coffee beans are seen at an outlet. REUTERS/Noor Khamis.