Are economic crises good for our health?

The conventional wisdom, prior to the turn of the 21st century, was that health deteriorates when the economy weakens and improves when it strengthens. This was true even though analyses undertaken as early as the 1920s (Ogburn and Thomas 1922, Thomas 1927), uncovered positive relationships between economic activity, total mortality and several specific causes of death. An important adherent of this view, Harvey Brenner, conducted a series of studies (e.g. Brenner 1971, 1979) using lengthy national time series, showing that recessions and other sources of economic instability increased overall mortality and deaths from many causes. However, this research has been widely criticised on technical grounds, and subsequent investigations have not provided robust results, probably because any lengthy time series may yield biased estimates due to omitted factors that are spuriously correlated with economic conditions and health.

As an alternative, most researchers now use panel-data methods containing information on health or mortality outcomes for multiple locations and time periods. Investigations using these strategies indicate that total mortality and several important causes of death rise during expansions and fall in times of economic weakness (see Ruhm 2012 for a summary of this research). However, there is also evidence that mortality in the US may have recently become less procyclical (Ruhm 2015a).

What we do not yet know is whether the patterns observed during periods of ‘standard’ economic fluctuations are reinforced, weakened or reversed in times of crises. Some information may be gained by examining how estimates of macroeconomic effects differ when analysing samples that do and do not include severe downturns, such as the Great Recession of 2007-2009. While somewhat inconclusive, these investigations suggest that the mortality declines observed during times of general economic weakness extend to crisis periods (e.g. Tapia Granados 2005, Van Gool and Pearson 2014, Toffolutti and Suhcke 2014). Particularly interesting are three studies (Fishback et al. 2007, Stuckler et al. 2012, Tapia Granados and Roux 2009), all finding that even during the Great Depression (during the 1930s), localised downturns were associated with reduced mortality (although some of the authors raise suggest that other factors may be responsible). Equally fascinated are two studies by Ásgeirsdóttir et al. (2014, 2015) finding that lifestyles became healthier after the extremely severe 2008 financial crisis in Iceland, with price changes (i.e. increased prices for most imported goods) probably explaining much of the effect. By contrast, life expectancy fell markedly in Russia following the breakup of the Soviet Union (by 6.6 years for males and 3.3 years for females between 1989 and 1994), in part because of reductions in alcohol prices (Brainerd and Cutler 2005).

Mortality effects of economic crises in the US

In recent research (Ruhm 2015b), I attempt to provide a better understanding of the mortality effects of economic crises in the US. The primary analysis uses panel data methods with state and county level mortality data for the US over the 1976-2013 period. The proxy for macroeconomic conditions is the state unemployment rate and the models also control for location-specific fixed-effects and time trends, demographic group shares and, in some specifications, year dummy variables. Models similar to those used previously do not distinguish the effects of economic crises from those of more typical macroeconomic fluctuations. To examine impact of the former, I add supplementary variables controlling for national or state-level economic crises.

Mortality data come from death certificate information contained in the Center for Disease Control and Prevention’s Compressed Mortality Files. Population data (the denominator in the mortality rate calculations) are from the National Cancer Institute’s Surveillance Epidemiology and End Results (SEER) program, which are also used to construct independent variables for the share of the state or county population who are female, black, other (non-black) non-white, and aged <1, 1-19, 45-54, 55-64, 65-74, 75-84 and ≥85 years old. Annual average state unemployment rates are obtained from the US Department of Labor’s Local Area Unemployment Statistics database. In addition to total death rates, mortality was decomposed into that from diseases versus external causes and diseases into cardiovascular, malignant neoplasms (cancer), and all other diseases. Similarly, important categories of external deaths – transport accidents, non-transport accidents, intentional self-harm (suicide), and homicide/legal intervention – were separately considered.

I operationalise the definition of economic ‘crises’ by considering relatively extreme negative macroeconomic events occurring either nationally or at the state level. At the national level, these include the twin recessions occurring during the early 1980s (January through July of 1980 and July of 1981 through November of 1982), as well as the ‘Great Recession’, beginning in December of 2007 and lasting for 18 months. State-level economic crises are harder to define and so three alternative classifications are considered – the first two focus on unemployment that is high relative to the state average; the third considers both high relative and absolute levels of unemployment.

Figure 1 provides a first indication the relationship macroeconomic conditions and total mortality, showing national annual values, detrended (using a linear trend) and standardised to have a mean of zero and a standard deviation of one. These results are illustrative only, since they do not control for potential confounding factors. Consistent with previous research, the figure suggests an inverse relationship between unemployment and mortality rates. Particularly noteworthy is that the mortality declines are more pronounced during the severe recessions than mild downturns. Regression analysis using national data confirms this relationship, with a one-point increase in the (national) unemployment rate predicted to reduce mortality by 0.3% during typical periods, but with an additional 1.4% decrease in deaths expected during severe recessions. 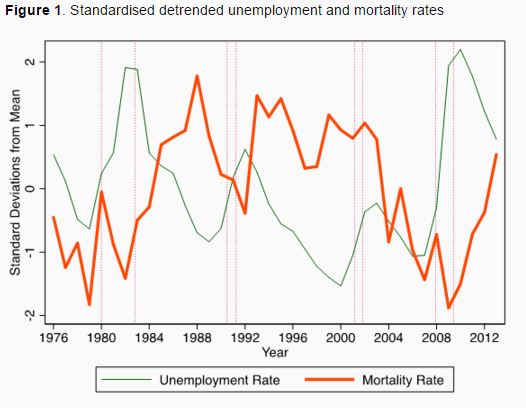 Note: The figure shows national unemployment and mortality rates that have been de-trended (with a linear trend) and standardised to have mean of zero and standard deviation of one. Vertical dotted lines show national recession periods.

Panel data estimates, using state or county level data, verify previous findings of a procyclical fluctuation in mortality – a one-percentage point increase in the state unemployment rate predicts a 0.3% to 0.4% reduction in the total death rate. Interestingly, the protective effect of macroeconomic downturns, if anything, appears to be larger during severe national crises than for more ‘typical’ economic fluctuations.

Direct evidence of the protective effect of severe national downturns was next obtained, with the severe recession coefficient in the panel data models indicating that total mortality rates fall farther during such periods than anticipated from a typical reduction in (state) unemployment rates. Specifically, an additional 0.5%-0.9% decrease in total mortality was predicted during severe national downturns and the total mortality reduction expected during such periods is approximately twice that predicted by higher unemployment rates alone. Conversely, state crises were estimated to have modest and inconsistent effects on total mortality.

National crises were estimated to have a protective effect on mortality from both diseases and external causes, beyond that predicted by the accompanying elevation of unemployment, while state economic crises again had less consistent effects. Within disease categories, severe national recessions had strong protective impacts for cancer or other diseases but not for cardiovascular deaths. This does not imply that cardiovascular mortality increases in crises, since the positive severe recession estimate needs to be combined with the negative unemployment coefficient, but it does suggest that the pathways vary across types of diseases. Within external sources of death, fairly strong (but statistically insignificant) additional protective effects of severe national recessions were obtained for transport and non-transport accidents. The results for suicides were most interesting – the general countercyclical fluctuation in deaths during typical periods from this source (which contrasts with procyclical variations for almost all other causes) were substantially offset by strong and statistically significant protective effects predicted for severe national recessions and all three state economic crisis proxies.

The evidence reported here suggests that the reductions in mortality occurring during typical economic downturns also occur in periods of crisis. Indeed, the empirical findings indicate that severe national recessions had protective effects that were around twice as large as those predicted by the associated higher unemployment rates alone, although these impacts vary across sources of death and there was no consistent pattern of findings across proxies for state economic crises.

These conclusions come with caveats. First, when using panel data methods, year dummy variables are typically included to account for time-varying confounding factors. This is not possible when examining national crises, since the vector of time effects would absorb their impact. Second, while most estimates indicate a ‘dose-response’ relationship in the severe recessions, this was not true for all of the cause-specific models. Finally, these conclusions should be tempered by the understanding that economic crises may contain idiosyncratic elements, limiting the generalisability of the results discussed here.

Brainerd, E and D Cutler (2005), “Autopsy on An Empire: Understanding Mortality in Russia and the Former Soviet Union”, Journal of Economic Perspectives 19(1): 107-130.

Ogburn, William F and Dorothy S Thomas (1922), “The Influence of the Business Cycle on Certain Social Conditions”, Journal of the American Statistical Association 18(139): 324-340.

Author: Christopher J. Ruhm is a Professor of Public Policy & Economics at the University of Virginia.

Ukrainian Economy To Shrink By Almost Half In 2022, Predicts World Bank