Can ISIS bring Europe closer together?

During the financial crisis, the eurozone’s northern members rescued their southern counterparts by offering huge bailouts and backing the European Central Bank’s promise to save the euro at all costs. When Germany recently requested a quota system to cope with the massive influx of refugees, however, its partners showed no such solidarity. And now that France, reeling from the Paris attacks, has declared war on the Islamic State, other European countries are shrugging their shoulders, mumbling condolences, and silently hoping that the conflict will spare them.

The implication is clear: although Europe has made significant progress toward fiscal union, it remains far removed from political union. 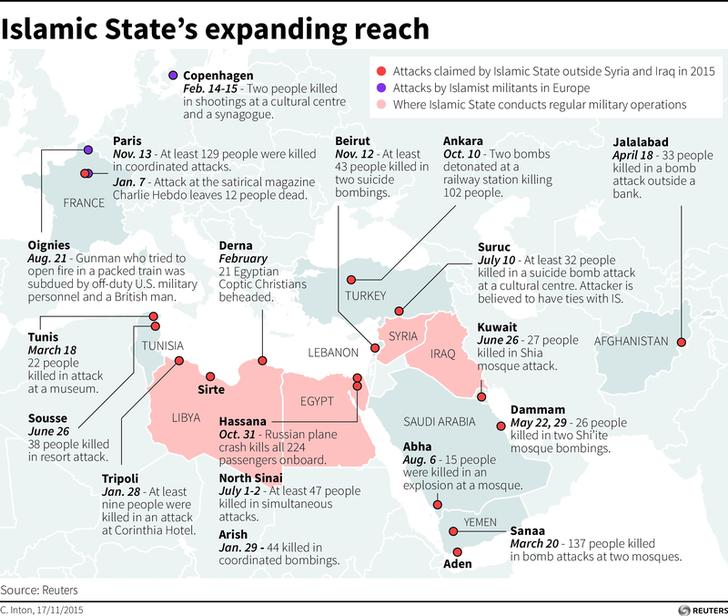 A half-century after the foundation of a common market and 15 years after the launch of the common currency, Europe still lacks a united police force and a single foreign policy. Perhaps most problematic, the EU is still home to 28 armies, with 28 commanders-in-chief, bound together only loosely by NATO.

Some European leaders – including French President François Hollande and European Commission President Jean-Claude Juncker – seem unbothered by this reality. They argue that Europe should be accelerating progress toward fiscal union even further, by introducing a common insurance scheme for deposits, a single budget, Eurobonds, more financial risk-sharing, and a unified unemployment-benefits system as quickly as possible.

They are wrong. In fact, such measures would only exacerbate the flaws in the eurozone’s structure. They would sustain false relative prices – the result of the inflationary credit bubble in the south that formed after the euro’s adoption – that are preventing the euro’s southern European countries from regaining competitiveness. As a result, structural unemployment in France and Southern Europe would persist.

Moreover, the proposed measures would compound Europe’s public-debt problems by reducing interest-rate spreads among countries even further, sustaining asset-price bubbles, and destroying the capital market’s allocative role. This was the mistake the United States made after its founding, when various rounds of debt mutualization fueled an unsustainable credit bubble that drove nine of the 29 US states and territories into bankruptcy from 1835 to 1842 and paved the way for the American Civil War.

The disadvantages of strengthening Europe’s fiscal union further do not end there. Continued progress toward fiscal union would, paradoxically, make political union increasingly unlikely for one simple, but important reason: France.

Europe’s strongest military power by far, France has thwarted all attempts to pool Europe’s armed forces. In 1954, France’s National Assembly rejected the treaty for the Western Union Defense Organization. In 2005, France rejected the proposed European Union Constitution, which could have marked the beginning of the political unification process. Successive French presidents have declared that France will not accept a United States of Europe as even a remote goal of European politics.

But France – whose banking system and industries are heavily exposed to southern Europe – is a major beneficiary of fiscal union. When the global financial crisis began, French banks’ exposure to Greece, at €58 billion ($61.7 billion), was twice as high as that of German banks. Given this, it is understandable that France prefers fiscal to political unification. But if other European countries accept this preference, and Europe continues along its unbalanced integration path, there will be no leverage to convince France to support political union.

Perhaps the tragic terrorist massacre in Paris will change the French aversion to political integration. By highlighting that even a mighty military power sometimes needs support, the attack could prove to be a game changer in the effort to create a European political union. Of course, for this to happen, the countries of Europe must unite to help France in its fight against the Islamic State. Meanwhile, France and other EU countries should help Germany, Austria, Sweden, Hungary, and Slovenia to alleviate the refugee crisis by accepting a quota system.

As Europe attempts to build a sustainable, stable, and prosperous union, it should look to successful unions like the US and Switzerland for guidance. Both of those unions began as military-defense organizations, and only later developed fiscal unions. It took decades, if not centuries, for them to obtain sizeable public budgets and begin engaging in income redistribution. And both prohibit the kind of fiscal or monetary bailout operations for single states or cantons that the EU pursued during the financial crisis.

It is time for the EU to change its approach to integration. Instead of continuing to push for unbalanced fiscal integration, it must work to implement key elements of political union, including an integrated police force, common asylum laws, a single foreign policy, and, above all, a united army. If recent events have taught us anything, it is that threats to the EU stem not from inadequate fiscal risk-sharing, but from insufficient coordination on foreign-policy and security challenges.

Author: Hans-Werner Sinn is a Professor of Economics and Public Finance at the University of Munich, and also President of the Ifo Institute for Economic Research and serves on the German economy ministry’s Advisory Council.