So far in 2015, at least 800,000 people have applied for asylum in Europe, with hundreds of thousands more arriving outside formal procedures. There is growing concern that Europe cannot cope: unemployment is already high, waiting lists for social services are already long, our roads are already crowded and houses already full. It is widely held that Europe is currently in the midst of a refugee crisis.

Certainly the sheer number of people arriving in Europe this year should not be underestimated – by the end of 2015 the number of asylum seekers alone may be double those who arrived in 2014. But perspective is required. Europe received around a million asylum seekers and refugees from the Balkans during the mid-1990s, and on the whole they were integrated successfully. There are far more refugees outside Europe – around 20 million worldwide; and between them Jordan, Lebanon and Turkey currently host almost 4 million Syrian refugees. Compared with the population size of Europe (over 500 million), a million newcomers need not represent a crisis. 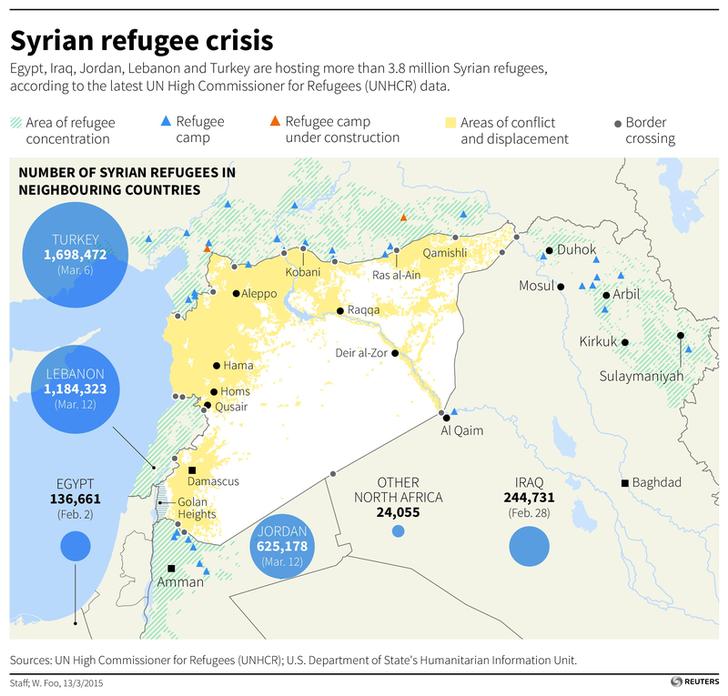 Where are they coming from?

While attention is mainly on refugees fleeing Syria – and they are the largest number of refugees currently arriving in Europe – they are by no means alone. Significant numbers are also arriving from Afghanistan, Eritrea, Iraq, Kosovo, Nigeria and Somalia. Herein lies part of the real crisis: while most people arriving from Syria are fleeing persecution and conflict; many of those from other countries are leaving poverty and looking for jobs. The former are refugees and the latter are not, and each is entitled to different protections and rights. Its mixed nature makes the current influx a particular policy challenge.

Where are they going?

These asylum seekers and migrants are not evenly distributed across Europe. Two sets of countries might legitimately describe the current situation as a crisis: those receiving very large numbers, and those least equipped to cope. The largest number of Syrians has arrived in Germany, which is however also Europe’s most populous state. One in seven is in Sweden, where the national population accounts for only one in 50 of the European Union’s citizens. Significant numbers have also arrived in Greece, which is already facing unemployment and fiscal challenges of crisis proportions, although most plan to move onwards. Neither are Eastern European countries such as the Czech Republic, Poland and Slovakia currently ready or willing to deal with the influx. 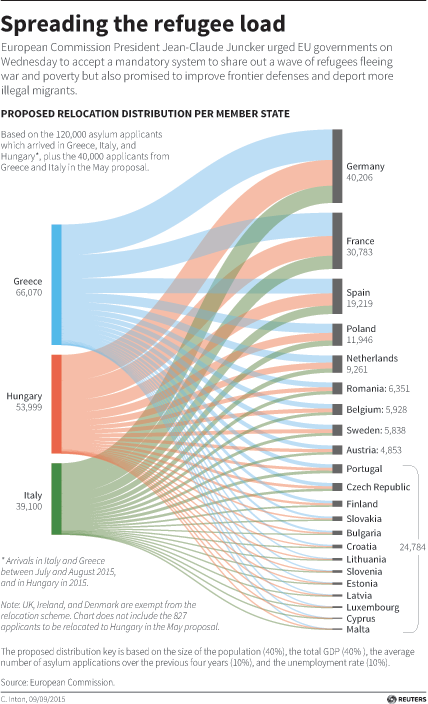 What is being done?

Europe’s governments have responded differently. Some, most notably Germany, plan to resettle millions of refugees in the coming years; others, like the United Kingdom, plan to resettle a few tens of thousands. Others, like Sweden, have no significant resettlement plans but are fulfilling their commitments to provide asylum; others, like Hungary, are building walls. As a region, the EU has so far failed to reach consensus, and a particular sticking point has been a formula for distributing asylum seekers between them. Europe’s citizens have helped fill the void by providing personal assistance to asylum seekers. The private sector is also increasingly engaged, for example through direct contributions to humanitarian agencies, providing social media connectivity for refugees and their supporters, and in some cases providing training, apprenticeships and jobs.

Where do we go from here?

The numbers of people arriving are unlikely to recede soon – there are already forecasts for another 3 million asylum seekers and migrants in Europe next year. Unless a way is found to distribute these arrivals more equitably, hospitality even in countries like Germany and Sweden is likely to wear thin. Equally, citizens’ general sense of good will towards the refugees may decline as the real challenges of integration set in; and the private sector’s engagement is unlikely to sustain.

Immediate action is needed in three areas. First, we need to look upstream, and try to address the conditions that are driving people from their homes, and provide better protection and assistance in the countries where they initially arrive. Second, we need to look downstream, and focus on integrating those who have already arrived, in particular with a focus on education. Third, we should see beyond the immediate humanitarian crisis, and realize the opportunity to fill Europe’s labour market gaps, and begin to plug its demographic deficits.

Author: Khalid Koser is Executive Director of the Global Community Engagement and Resilience Fund and a member of the Global Agenda Council on Migration.