Is the term ‘developing world’ outdated? 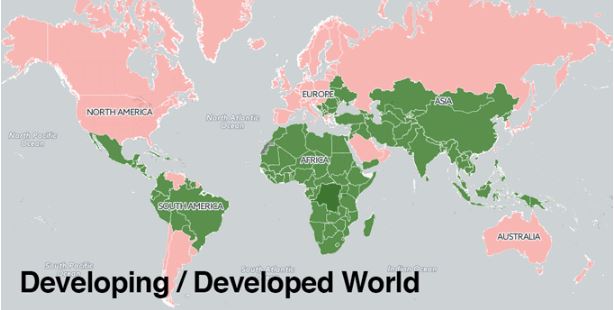 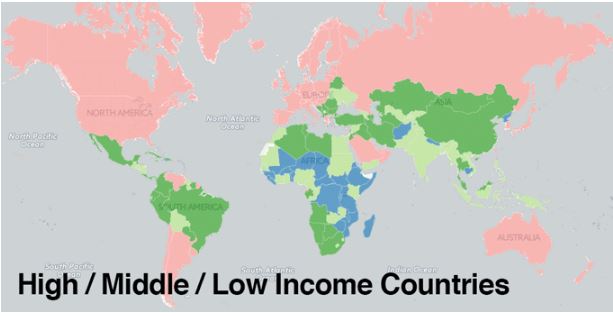 Humans, by their nature, categorize. Economists are no different. For many years, the World Bank has produced and used income classifications to group countries.

The low, lower-middle, upper-middle and high income groups are each associated with an annually updated threshold level of Gross National Income (GNI) per-capita, and the low and middle income groups taken together are referred to in the World Bank (and elsewhere) as the “developing world.”

This term is used in our publications (such as the World Development Indicators and the Global Monitoring Report) and we also publish aggregate estimates for important indicators like poverty rates for both developing countries as a group and for the whole world.

But the terms “developing world” and “developing country” are tricky: even we use them cautiously, trying to make it clear that we’re not judging the development status of any country.

The challenges and limitations of categorization

Before writing anything more about categorization, let’s agree that this is an art, not a science. While classification schemes are convenient for analysis and communication, every one comes with a set of limitations, biases and cultural overtones. We acknowledge this, and endeavour to offer sound rationales and methodologies for using a given categorization system.

While we can’t find the first instance of “developing world” being used, what it colloquially refers to – the group of countries that fare relatively and similarly poorly in social and economic measures – hasn’t been consistently or precisely defined, and this “definition” hasn’t been updated. The World Bank has for many years referred to “low and middle income countries” as “developing countries” for convenience in publications, but even if this definition was reasonable in the past, it’s worth asking if it has remained so and if a more granular definition is warranted.

How do others classify countries?

Back to the issue though – perhaps we can start by looking at what others do.

The IMF, in the “World Economic Outlook (WEO)” currently classify 37 countries as “Advanced Economies” and all others are considered “Emerging Market and Developing Economies” according to the WEO Statistical Annex. The institution notes that “this classification is not based on strict criteria, economic or otherwise” and that it’s done in order to “facilitate analysis by providing a reasonably meaningful method of organizing data.”

The UNDP’s Human Development Index is a well-established multi-dimensional measure of wellbeing and groups countries into: “Very high”, “High”, “Medium” and “Low” levels of human development. The index draws on various indicators including those related to income, education and health.

The United Nations has no formal definition of developing countries, but still uses the term for monitoring purposes and classifies as many as 159 countries as developing. Under the UN’s current classification, all of Europe and Northern America along with Japan, Australia and New Zealand are classified as developed regions, and all other regions are developing. The UN maintains a list of “Least Developed Countries” which are defined by accounting for GNI per capita as well as measures of human capital and economic vulnerability.
Is the “developing world” a useful categorization?

But are these or any other usage of the term “developing world” still useful?

Many in the economics and development community already think it’s time we stopped using it.  Bill and Melinda Gates certainly think the term to be passe, and In a recent talk, Hans Rosling argued that what most people think of as the divisions between the “developed” and “developing world” no longer exist, that using the term developing world’ is intellectually lazy, and that we should classify countries more precisely.
Is the categorization too broad or no longer distinctive?

Fertility rates vs Infant mortality, 1960 vs 2013, click for interactive

But if you compare this with the chart for 2013 (and can click through to the interactive version) you see that this distinction has changed dramatically – it’s still possible to distinguish a few countries, but in most of the world, we see both low infant mortality and fertility rates. 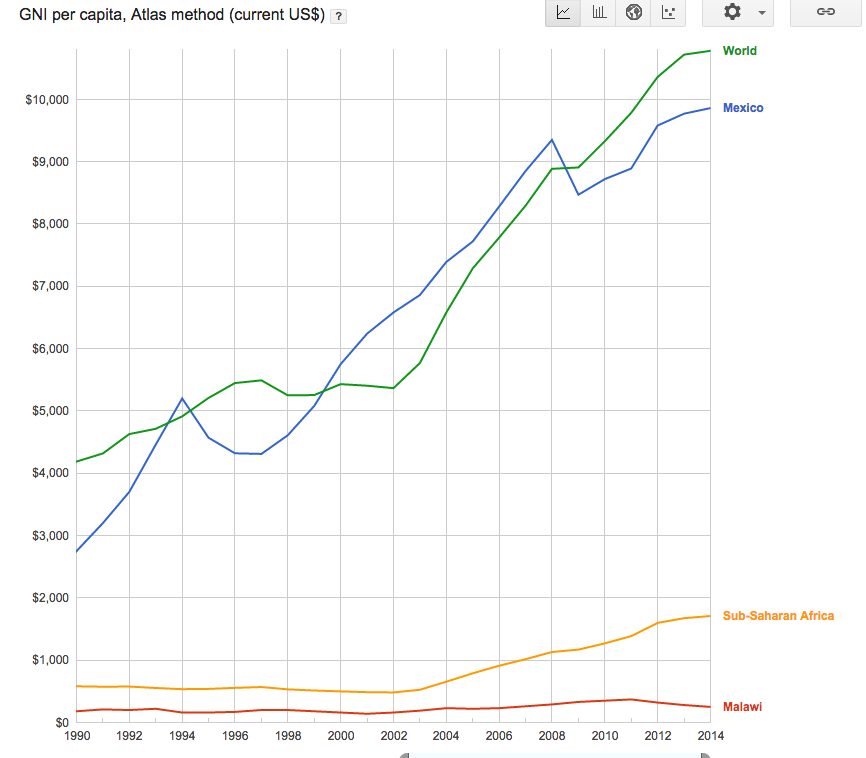 Similarly, the estimates of extreme poverty rates using the $1.90/day line and PovCalNet can vary from the low single digits (2.68% in Mexico) to over 60 percent (70.91% in Malawi) between countries in the developing world:

If the “developing world” classification is being used to group countries with similar attributes, where people experience similar lives, its use seems increasingly inappropriate.
Goals for part of the world or all of it? The SDGs 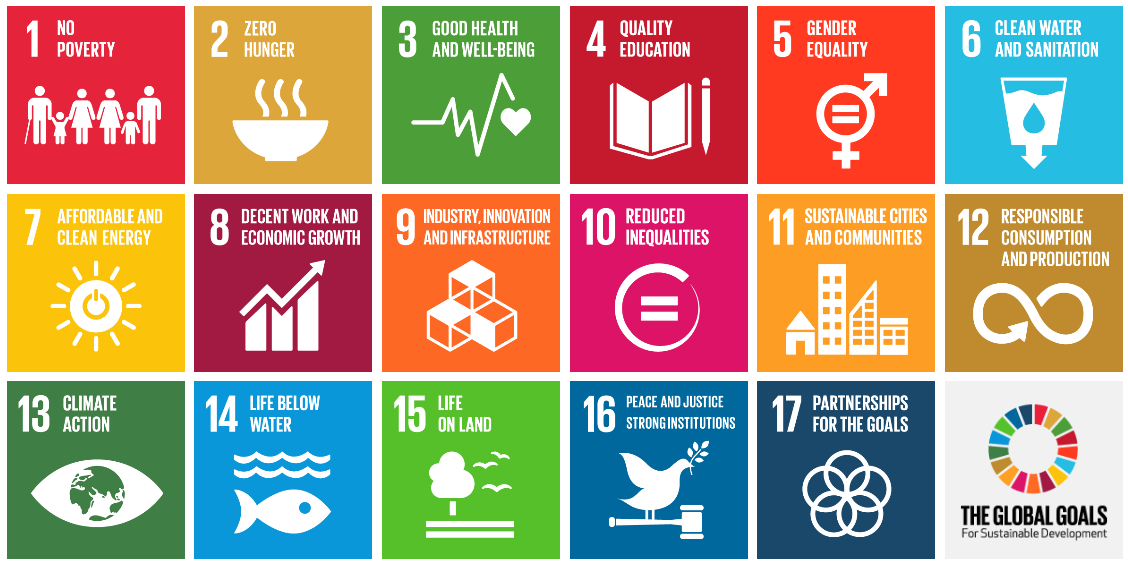 The discussion is interesting for us in 2015, as the Sustainable Development Goals (SDGs)  are goals for the world,and turn a page from the Millennium Development Goal (MDG) process. Within the MDG framework, the world was divided into the developing and developed categories with the targets for MDG goals 1 through 7 being relevant for developing countries and MDG goal 8 for developed / donor countries.

Interestingly, while we’ve already noted that the UN has no formal definition of developing countries some 31 of the 169 proposed SDG targets still refer to “developing countries”. To us, this is a reflection of how ingrained the term is as a piece of shorthand in the development zeitgeist, even if the group it refers to is far less homogenous than most users of the term think.

In spite of this, by setting goals for the world as a whole, the SDGs acknowledge that the world is a highly unequal place and emphasize the need for goals being achieved by all groups of individuals. This, to us, is another compelling reason for phasing out the use of “developing world”

Reporting on the world as a whole

In light of the developing / developed world categorization becoming less relevant, and the renewed focus on targets for the whole world, here’s what we could do in our own data collection, the World Development Indicators:

There are many other issues related to classification we didn’t cover here. One of them, the classification of countries by income, will be discussed in more detail in a forthcoming paper. In the meantime, we think phasing out the use of the “developing world” (initially from the World Development Indicators) is a sensible move and we welcome a discussion about it.

Author: Tariq Khokhar is a Data Scientist and the institution’s Open Data Evangelist. Umar Serajuddin is a Senior Economist-Statistician at the Development Data Group of the World Bank.