This is why work will always fill up your time

When was the last time you finished a job in less time than was allocated to it?  Have you ever moved from a smaller to a larger home and discovered that your big, new home is somehow filled with stuff after a while? How about car parks or real estate developments that start out small, enlarge, and end up just as packed as before? 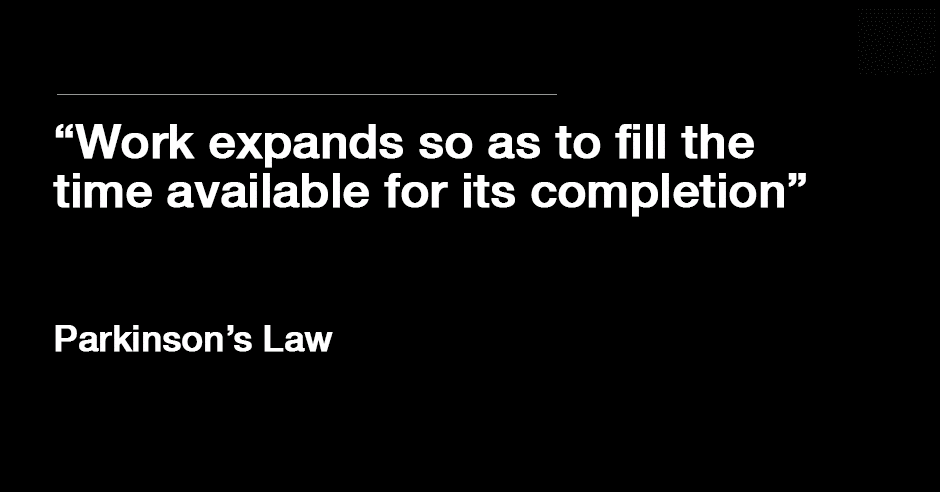 This principle comes from the opening line of a humorous essay by Professor Cyril Northcote Parkinson published in The Economist in 1955.

The essay explains the results of a study he conducted of the British Civil Service. The British Civil Service grew between 1914-1928, with a noticeable rise in administrative positions and a concurrent decline in ‘fighting’ positions. In 1914 there were 2,000 Admiralty officials with this number growing to 3,569 in 1928, creating “a magnificent Navy on land.” The interesting part of this shift, however, is that this growth was unrelated to any possible increase in their work.  The British Navy during that period had diminished by a third in men and two-thirds in ships. From 1922 onwards it was limited by the Washington Naval Agreement, signed among the major nations that had won World War I, which limited naval construction to prevent an arms race. Thus, the number of people employed in the bureaucracy increased even as the British Empire collapsed — an event that decreased the amount of work available.

Parkinson wrote “Granted that work (and especially paper work) is thus elastic in its demands on time, it is manifest that there need be little or no relationship between the work to be done and the size of the staff to which it may be assigned.”

This, he said, was due to non-work related growth factors, including:

Thus, in Parkinson’s view, these two factors mean that more people are tasked with achieving the same objective and have taken far longer to produce the same result. “No-one has been idle. All have done their best”. The officials will work late and reflect as they turn off the office lights “late hours, like grey hairs, are among the penalties of success.”

Many of us have seen this process in our own lives, at times in startling clarity. The problem with bureaucracy is that it has a natural tendency to dysfunction.  Protocols can be put in place to manage this dysfunction— for a while— but problems will start to resurface after a while and the organization will become bloated once again.

Parkinson’s Law has also been expanded to many aspects of life, including why our hard drives always end up full and the “just in time” principles of manufacturing.

Parkinson, himself, explained why organizations get bogged down in trivial issues. Parkinson’s Law of Triviality— also known as bike shedding, the bike-shed effect, and the bicycle-shed example— describes the phenomenon by which organizations give disproportionate weight to trivial issues. Parkinson describes a committee that needed to approve plans for a nuclear power plant. The committee spent most of its time discussing relatively unimportant but easy-to-grasp issues, such as what materials to use for the staff bike-shed, while neglecting the very important issue at hand— the proposed design of the nuclear power plant. He quipped that the time spent on any item of the agenda would be inversely proportional to its complexity or import. A nuclear reactor is extremely expensive and complicated and most individuals cannot understand it so they assume that those who work on it understand it. On the other hand, everyone understands what goes into constructing a simple bicycle shed so planning one can result in endless discussions as everyone wants to contribute.

Parkinson also wrote a book titled “Mrs. Parkinson’s Law and other studies in domestic science.”  Mrs. Parkinson’s Law states that, “Heat produced by pressure expands to fill the mind available from which it can pass only to a cooler mind.”  This means that the complications and the perceived affronts of daily life can gnaw and frustrate an individual’s peace of mind. As they fester, the individual will become angrier until they can relieve the pressure by complaining to a less-agitated person. This was also illustrated by the Chain of Screaming episode of the popular US TV show How I Met Your Mother, in which Barney explains that Marshall shouldn’t deal with his boss yelling at him, but should relieve his frustration by screaming at someone “below” him, then that person can scream another person, and so on.

So what can we do with Parkinson’s brilliant observations? Parkinson’s Laws are not catch phrases regarding deferment, but models to describe the factors that contribute to the growth of bureaucracy, the multiplication of work, and the escalation of anger.  Its central conclusion: growth is (many times) independent of demand.

The lesson of this conclusion is that restrictions can actually create freedom. Specificity and boundaries create freedom and nourish creativity because they provide context and structure to our thinking. Only by limiting the time and resources we allocate to tasks, will we be able to be more efficient and free up time and money for other pursuits. Only by acknowledging our frustrations and handling them before they result in screaming matches, can we save our mental capacities for creative thinking.