What is the natural rate of interest?

What’s at stake: Controversies over whether and by how much the natural rate of interest – the rate compatible with full employment and stable prices – has declined in the past few years has shaped views about the pace and extent to which central banks should normalize policy rates.

Martin Sandbu writes that there is a simple idea that frames some of the biggest economic questions of our time and helps to clarify the positions and the stakes in the deepest disagreements over policy.

Thomas A. Lubik and Christian Matthes write that the usage of the natural interest rate concept dates back to the Swedish economist Knut Wicksell, who in 1898 defined it as the interest rate that is compatible with a stable price level. An increase in the interest rate above its natural rate contracts economic activity and leads to lower prices, while a decline relative to the natural rate has the opposite effect. A century later, Columbia University economist Michael Woodford brought renewed attention to the concept of the natural rate and connected it with modern macroeconomic thought. He demonstrated how a modern New Keynesian framework, with intertemporally optimizing and forward-looking consumers and firms that constantly react to economic shocks, gives rise to a natural rate of interest akin to Wicksell’s original concept.

The natural rate after the Great Recession

Martin Sandbu writes that Thomas Laubach and John Williams have been in the game of estimating the US natural rate for a long time, and have recently updated their model. They find that the natural rate of interest dropped dramatically in the global financial crisis, and has remained low, indeed slightly negative, ever since. 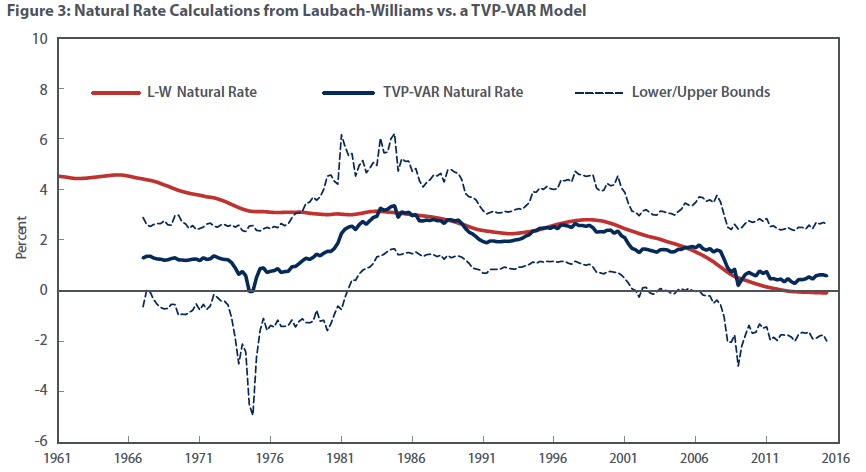 Thomas Laubach and John Williams write that if sustained, real short-term interest rates will be lower on average in the future than was typical in the postwar period. A lower average real interest rate in turn implies that episodes of monetary policy being constrained at the effective zero lower bound are likely to be more frequent and longer. While the use of large-scale asset purchases appears to have been a powerful policy tool when short-term rates were constrained by the zero lower bound following the financial crisis, it is unclear whether a permanent expansion of the central bank’s balance sheet would permanently reduce longer-term interest rates and thereby increase the natural rate of interest.

This bond market metric is in the headlines - but what exactly is the yield curve and can it really indicate whether or not we’re heading for a recession?

A financial "attack" on stablecoin Terra is thought to have triggered a crash across cryptocurrencies, losing over $500 million in a seven-day period.

As economists warn of a recession, what lies ahead for the US economy?