For several years, Chinese leaders have been pursuing economic “rebalancing.” The country’s longstanding growth model, based on investment and exports, is to be replaced by one based on services and domestic consumption. It’s a necessary transition for China. Unfortunately, consumption-led growth remains a distant prospect.

Yes, the contribution of domestic consumption to GDP has risen slightly over the last few years. But that mainly reflects weak investment demand, not strong consumption growth. In fact, wealth accumulation remains the primary objective of Chinese households. And, given China’s economic structure, under-developed financial market, and weak welfare state, high levels of precautionary saving will persist for the foreseeable future.

Indeed, one key factor impeding consumption is the imperative faced by China’s older workers to save for retirement. In the past, the Confucian tradition of filial piety meant that children supported their parents in their dotage. But, after more than three decades of the one-child policy, retirees cannot reasonably expect nearly as much support, and China lacks a strong pension system to pick up the slack.

As it stands, urban retirees derive about half of their income, on average, from family support. But middle-aged workers know to expect less when they retire. Even the elderly are increasing their savings, owing partly to longer life expectancy and a surge in medical costs. This contrasts sharply with rapidly declining savings rates among the elderly in the United States.

Another reason Chinese households are unlikely to increase their spending is that their income’s share of GDP has been falling – from about 70% in 1990 to about 60% 2010. (It remains at a constant level of 80% in the developed economies.)

The problem here is twofold. First, China’s growth model is distorted, as it emphasizes investment over employment growth and depends partly on wage suppression to subsidize production and exports. Second, financial repression has capped Chinese households’ savings at about a zero real rate of return.

Cheap capital and low labor costs might be good for output growth, but household demand is being throttled. In this sense, the main imbalance that China must address is not between consumption and investment, but between households on one hand and the government and corporations on the other. 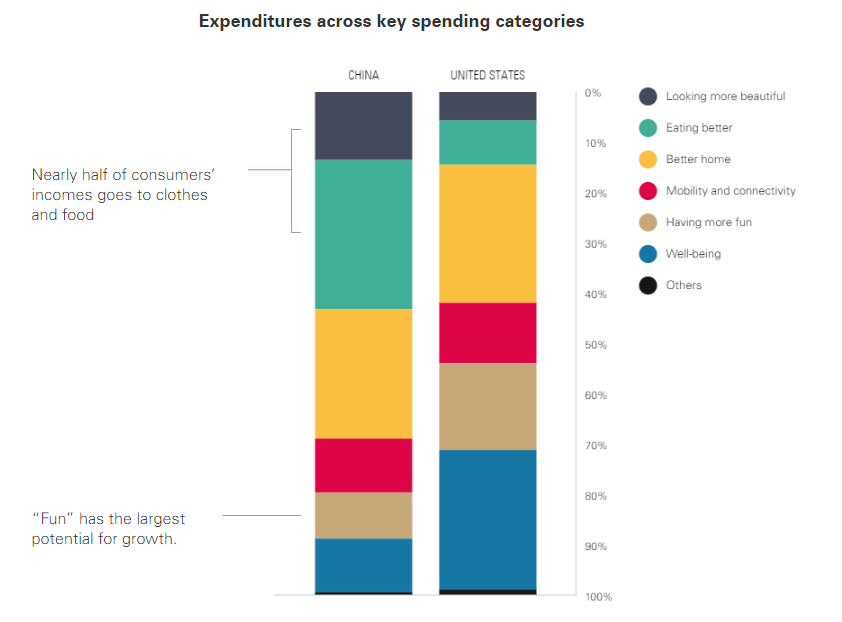 That’s why typical stimulus policies haven’t worked – and not for lack of effort. In the last few years, the Chinese government has been implementing the combination of expansionary fiscal policy and loose monetary policy that would ordinarily spur consumers, expecting high future inflation, to consume more.

This approach has not only been ineffective in China; it may prove to be counter-productive, with households, eager to preserve their purchasing power, saving more and hunting for higher rates of return. Already, this effect has kept consumer- and producer-price indices from rising, despite monetary easing, while inflating asset-price bubbles.

Clearly, the Chinese government hoped that positive wealth effects from rising asset prices would stimulate consumption. Instead, official encouragement of financial innovation fueled a sharp rise in the stock market, far beyond what China’s economic fundamentals merited. When the government tried to rein in the market last summer, it inadvertently triggered a large-scale sell-off, which quickly turned into a rout, largely because of those same financial innovations (for example, margin trading). Now, the aftershocks may cause consumption to decline even more.

None of this is to say that China’s quest for higher domestic consumption is destined to fail. On the contrary, unlike today’s middle-aged workers, for whom shocks like the Cultural Revolution nurtured pragmatism and wariness, China’s younger generation are optimistic about the future. They know that they can reasonably expect higher wages than their parents and grandparents earned.

Moreover, China’s younger generation are keenly aware of their quality of life, owing partly to their constant exposure to advanced-country lifestyles. As a result, they are far more inclined than their parents to spend on services and nondurable goods. When they become the main agents of the Chinese economy – that is, when they reach middle age – China’s consumption landscape may be completely different, with the country acting as a global buyer, rather than a global seller.

But that transition is a long way off. In the meantime, China’s government should pursue a different set of consumption-boosting policies, beginning with an easing of household borrowing constraints.

Clearly, Chinese households have plenty of room for more borrowing. With looser constraints on household credit, China’s government would enable its young people, like young Americans, to finance their educations and purchase more durable goods.

When it comes to economic rebalancing, China will need to be patient, recognizing that the current generation is simply too fixated on saving to provide the kind of surge in consumption that is needed. There are steps policymakers can take to accelerate progress, but, until the next generation grows up, real progress will have to wait.

Author: Keyu Jin, a professor of economics at the London School of Economics, is a World Economic Forum Young Global Leader and a member of the Richemont Group Advisory Board.

Image: A 100 yuan banknote (bottom) is placed next to U.S. $100 banknotes in this picture illustration. REUTERS/Petar Kujundzic.