Which freedoms are most important to you?

Not everyone views freedom the same way. According to a survey of 38 nations by the Pew Research Center, the vast majority of people believe that living in a country with religious freedom, a free press, free speech and competitive elections is important. But which of the principles are valued as “very important” varies, both regionally and nationally. 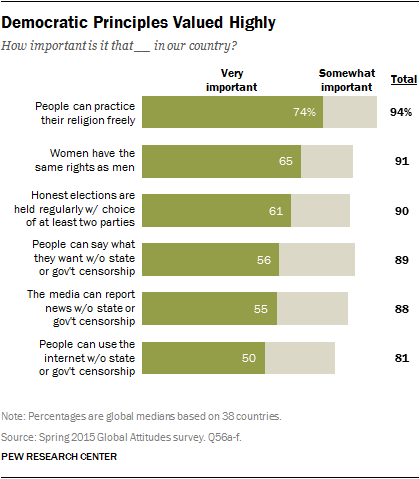 The United States was the most liberal nation, with respondents placing high importance on all categories.

On a wider scale, the most important right was deemed around the world to be religious freedom, with a global median of 74%. Support for women’s rights was strong throughout Europe, the US and South America, but was given less importance in other regions, bringing the global median down to just 64%. Have you read?
What are your digital rights?
Which countries have the most internet freedom?
Countries with the highest level of well-being