18th December was International Migrants Day, and a good day to reflect on just how dramatic a year 2015 has been for migration. Historic levels of displacement, thousands of deaths in transit and an unfolding European asylum crisis have combined with rising xenophobia, growing concerns about migration and security, and frozen policy-making.

Can things get any worse – or better – next year? Here are 10 predictions on migration in 2016:

Europe’s asylum crisis will get worse. There may not be many people left in Syria who want to escape, but the 3 million outside the country will not be going home any time soon, and neither does the majority want to stay in Jordan, Lebanon or Turkey. Nor is there any prospect for dramatic improvements in other countries from which people are heading to Europe in significant numbers, like Afghanistan and Eritrea. Hungarian walls will not keep them out, any more than will naval patrols in the Mediterranean or capacity-building in transit countries. Expect three million asylum seekers to enter Europe next year – double the number this year – and most of them to head for Germany and Sweden. 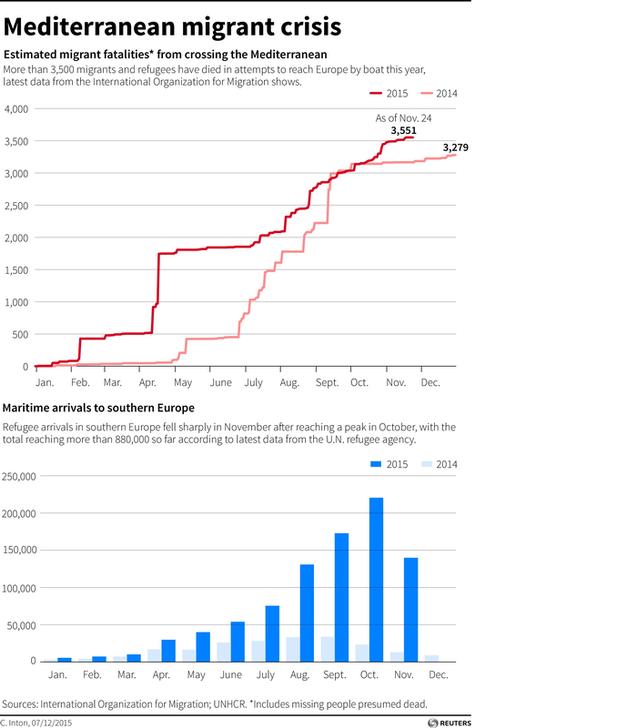 The number of refugees worldwide will rise to yet new historic levels. The Syrian crisis will be compounded by new displacement from Afghanistan, Central African Republic, Eritrea, Libya and Yemen – and these are only the countries that are easy to predict. Climate change won’t yet displace significant numbers – wait for 2020 for that. In the meantime there is no obvious opportunity for large-scale returns home to counterbalance these outflows globally (modest returns to Myanmar may be the best we can hope for). The majority of refugees will continue to live in the world’s poorer countries.

Migrants will send home more money than ever before. The continued growth of international migration, a structural reliance on migrant labour, and the continued recovery of the global economy, will combine to fuel migrant transfers or remittances of at least $500 billion. As a result migration will continue to rise on the development agenda. After significant lobbying, the potential for migration to contribute to poverty reduction has been acknowledged in the 2030 Sustainable Development Goals (SDGs).

There will be more women migrants than men. Over the last 20 years the number of women among migrants has increased worldwide, as the global demand for labour has become focused on domestic work, services, hospitality, and sex. In 2016 women will comprise more than half the world’s 232 million migrants for the first time. A growing proportion of these women will migrate independently and as breadwinners for their families. A growing proportion will also be trafficked, and suffer human rights abuses.

The global war for talent will intensify. Continued retrenchement in Europe will place even greater emphasis on employing the best and brightest, but Europe will face growing completion from new skills magnets like Brazil and China. Expect ageing, conservative, and increasingly xenophobic Europe to lose out in this competition. And expect more innovative policy responses in the US, for example to extend residency rights for tertiary students at the end of their degrees.

Migrants will be a game-changer in the US Presidential election. The extent of popular support for anti-immigration policies will be a determining factor in who wins the Republican nomination for President. The way that Hispanics (comprising 17% of the US population already) vote will influence the final outcome of the general election. Migration will also be critical issues in the 2017 French Presidential election and the UK’s in-out EU referendum.

Integration failures will loom large. In particular the one-way traffic into Europe will make European policy makers look downstream to find ways to integrate new migrants more sustainably than has been the case in the past. I predict a retreat from philosophical differences between multiculturalism vs acculturation and a growing consensus to focus on practice, and in particular housing, employment and education. It will take a generation before we can assess to what extent integration has succeeded.

Migration policy will continue to flounder. In Europe the EU will get no closer to consensus as member states retreat to national interests on migration. In the US President Obama’s term will end without enacting significant immigration reform. Trapped in election cycles, kowtowed by negative media coverage, and singularly lacking in political leadership, migration policy will continue to be short-term, reactive, and ineffective.

A migrant will perpetrate a terrorist attack. This is almost inevitable given the current scale of migration from the Middle East and North Africa, and the extending reach of Islamic State. This will be the moment the resolve of states and the international community will be tested. Will they perceive the risks of migration to now outweigh its dividends, and if so what will happen: suspend Schengen in Europe? Reduce refugee resettlement quotas? Introduce immigrant profiling?

You will have reason to thank a migrant. A migrant health worker will care for your or your relatives; a migrant teacher will help educate and care for your children; you will depend on technology developed by a migrant entrepreneur; migrants will do jobs that you are unwilling to allowing you to live comfortably; you will continue to enjoy migrant food, culture and music.

Have you read?
3 real stories from refugees
Europe can solve its refugee crisis, if it has the will
6 ways technology can transform humanitarian response
Migration and terror: time for a sensible debate?

Image: Migrants walk towards a village after entering from Macedonia by foot in Miratovac, Serbia, October 24, 2015. REUTERS/Ognen Teofilovski

Here are 6 humanitarian issues that must be addressed in 2022

Alongside tackling COVID-19 and the climate crisis in conflict zones, humanitarians need help to address autonomous weapons and cyber risk in 2022.

Higher food inflation has a disproportionate impact on poor families. It's estimated that there were 264 million malnourished people in the region in 2020.

How to integrate disability inclusion in disaster risk management