8 things to know about climate economics

This article is published in collaboration with Road To Paris.

“Wherever I go, I ask questions about economics – and get answers about climate,” British journalist Paul Mason wrote in his recent book “Postcapitalism”. “In 2011 in the Philippines, I met landless farmers living in rural slums. What had happened? ‘The typhoons,’ came the answer.”

What’s the connection between climate and economics? In the past four decades, debate has focused on the economic impacts of environmental degradation and regulation. Recently, however, the influence of economics on climate policy has evolved from a narrow focus on cost to large systemic change. 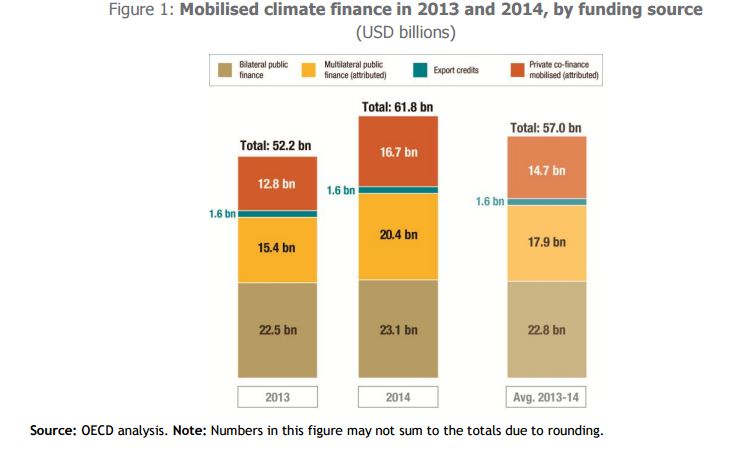 Many of the “make or break” issues that the delegations at the 21st Conference of the Parties have to tackle are related to economics: climate finance, loss and damage, adaptation. The key may be on the synergy between scientific understanding of the changes afoot in our earth system and economic understanding of how we manage the transition to a low-carbon development.

“The world economy is going through a huge transformation, of which climate change is only one of the components,” says James Rydge, Lead Economist at the New Climate Economy. “If we want sustainable and equitable growth while dealing with climate change, we have to go beyond a narrow focus on cost and reexamine the way we think about the economics. The transformation is happening, we now need to manage it well.” Where to start?

Here are 8 things you need to know about climate economics

1. Putting a price on environmental damage.

Between the 1970s and the 1980s, economists such as Ernst Friedrich Schumacher, Martin Weitzman and Partha Dasgupta analysed the costs of pollution, the risks of depleting natural resources and the unaccounted benefits brought by the environment to the economy. Studies in this field led to the “Blueprint for a green economy” – the first publication to use this term – issued in 1989 by David Pearce, Anil Markandya and Edward Barbier. The United Nations Framework Convention on Climate Change (UNFCCC) of 1992 was partly the product of this thinking, as it acknowledged the need to reduce greenhouse gases to avoid economic impacts.

Equity was a part of the new thinking on sustainable development that emerged in the 1970s. Who is responsible for greenhouse gases in the first place? Who will suffer the most severe consequences? Don’t poor countries have the right to growth as well? Who will bear the costs for adaptation to a changing climate in the poorest regions? This year’s Nobel Prize winner Angus Deaton has been among those who studied links between climate change, inequality and poverty. In global negotiations, these principles have been translated into the “common but differentiated responsibilities” and in commitments for funding and technology transfer from developed to developing countries. The Paris agreement is also likely to include measures to compensate the most vulnerable nations for loss and damage caused by global warming.

3. Managing the commons has a lot to do with trust.

In 1990, the late Elinor Ostrom pioneered research on how communities manage common resources such as land, forests and fisheries. She believed trust plays a central role as it encourages cooperative and non-exploitative behaviour. In relation to climate change, she argued that “single policies adopted only at a global scale are unlikely to generate sufficient trust among citizens and firms so that collective action can take place.” Ostrom has been the only woman to receive the Nobel Prize in economics. In her last op-ed before the Rio +20 conference, in 2012, she wrote: “We cannot rely on singular global policies to solve the problem of managing our common resources. A variety of overlapping policies is more likely to succeed than are single, overarching binding agreements.”

Besides international agreements, many economists have looked to market mechanisms to curb CO2 emissions. Some countries have opted for carbon taxes but most preferred emissions trading systems. The idea is to cap the emissions, distribute corresponding permits to polluting agents and allow them to trade the permits to meet emissions targets. “This mechanism is considered cost-efficient because it allows the least-cost polluter to undertake emissions reductions that can then be sold to polluters who would bear high costs in meeting their targets,” explains Maria Carvalho, Researcher at the Grantham Institute on Climate Change and the Environment, London School of Economics. The Kyoto Protocol of 1997 took the concept on board and emissions trading systems have since been established in some 40 countries. But progress has been slow, mostly because too many permits have been granted. There is now a strong call from companies and investors to set carbon prices to create incentives for low carbon investments.

In 1995, the Second Assessment report of the Intergovernmental Panel on Climate Chance (IPCC)dealt with the “economic and social dimensions” of global warming. The conclusions were that climate change would cause “aggregate net damage” to the global economy and that “10 to 30% of greenhouse gases could be reduced at negative or zero cost”. Fast forward to 2006, the British government commissioned a study on the economic impact of climate change. According to theresearch led by Nicholas Stern, without any action the world would lose at least 5% of Gross Domestic Product (GDP) per year. The cost of reducing emissions would be the equivalent of 1% of global GDP per year. This was a turning point in the narrative, putting climate change at the centre of the economic debate. The message, however, was not picked up at the 2009 climate summit in Copenhagen.

With climate change, environmental degradation and growing inequalities, a bigger question loomed: whether Gross Domestic Product (GDP) alone was an adequate indicator of countries’ economic success. As research was carried out in this area, between the 1990s and the 2000s the governments of the US and China considered (but then abandoned) projects to “green GDP”. In 2008, the French government appointed a commission to study ways to measure economic performance and social progress. Led by Jean-Paul Fitoussi, Joseph Stiglitz and Amartya Sen, the commission gathered 25 leading economists, including Angus Deaton and Nicholas Stern, as well as Bina Agarwal and Nancy Folbre (the only two women). It proved hard to assess the role of climate change in countries’ economic performance not least because of its global nature and the fact that the consequences “are distributed very unevenly, without necessarily correlating with a country’s CO2 emissions.” The commission therefore recommended a “dashboard of indicators” complementary to GDP to measure sustainable economies. Many alternatives have been suggested since then, but an agreed solution is yet to be found.

Population growth, geopolitical shifts and new technologies are also part of the global economic transition at the core of the Paris talks. Are existing tools, such as markets mechanisms and indicators, adequate for the scale of change? “Much more work is needed on how to manage an economic transition on this scale. Existing economic tools have much to offer if used in the right way,” says James Rydge. “Some countries may get stuck on costs and burdens of acting, with the risk of blocking the negotiations. What we need is a recognition that climate change isn’t just about costs. It is about opportunities for investments that have multiple benefits, it is about policies to make markets work better and increase economic efficiency. We just need to bring the right tools to the problem, which is one of development and wider systemic change.”

8. Will the sharing economy solve this?

New technologies have high costs, which decline over time, while quality and efficiency tend to improve and new features are added. William Nordhaus analysed the increasing power and declining costs of computers. This idea also applies to the “sharing economy”, which refers to excess capacity being leveraged through sharing platforms. The concept originated in the early 2000s, when law professor Yochai Benkler proposed a legal framework for open source software. Since then, applications like Uber, Airbnb and Spotify have allowed people to share goods and services outside the known market places. Does this model work for renewable energy? “Economies are constantly changing and sharing could have a profound impact on the way companies do business, access finance and develop technology. With new technologies, houses in a street or village could potentially share electricity and bypass the grid,” said James Rydge.

Author: Claudia Delpero is a journalist with experience in public affairs across Europe, China and Africa.

With a record delegation, Indian participants and political leaders made a strong presence at Davos 2022. On the agenda were key global challenges like the energy crisis and plastic pollu...

Scope 3+ is a collaborative effort with partner brands and customers to cut 1.5 gigatons of carbon emissions by 2035. This has widely been acknowledged as a bold move.