Women are more concerned about climate change than men, and they are more willing to make major lifestyle changes to do something about it.

The gap between how different genders perceive and react to the threat is as wide as 21% in some parts of the world, according to a recent poll by Pew Research. 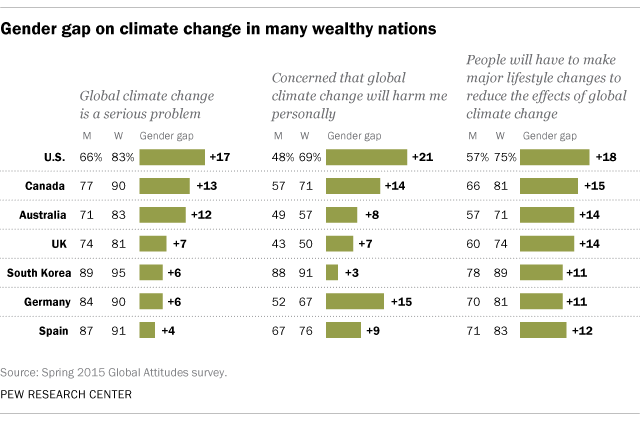 The difference in opinion between genders was highest in English-speaking nations, including the United States, Canada, United Kingdom and Australia. Women in the US, Germany and Canada were found to be more concerned about climate change’s potential to do them harm.

But the largest difference between men and women was in their willingness to act against climate change. In seven of the 11 industrialized countries surveyed, women were substantially more willing to make major lifestyle changes to reduce the effects of climate change, by a margin of 10% or more.

Have you read?
These countries are best prepared for climate change
Male and female brains? An illusion, say scientists
Where’s the best place to be a woman

Siberia has just experienced it's hottest day on record, a scary reminder of the current climate crisis we are living in, thanks to global warming and carbon emissions.

Over 60% of Americans say climate change is affecting their community

A report by Pew Research Center survey found that more than six in 10 Americans (63%) say climate change is currently affecting their local community.

How green entrepreneurs can help the Great Reset: Nico Rosberg on this week's World Vs Virus podcast

2020 is predicted to be the hottest year on record, according to NASA