November marked a setback in the fight against drug-resistant infections. Scientists announced that they had found bacteria that were resistant to colistin, known as an antibiotic of last resort. Even more alarming, they discovered that the gene providing the resistance could migrate from one strain of bacteria to another, meaning other types of infections could also become untreatable. The announcement prompted public health experts to renew their warnings that the world risks slipping into a deadly, post-antibiotic era.

But November also brought some good news – even if it received less notice. When the G-20 met in Antalya, the leaders of the world’s largest economies agreed that antimicrobial resistance was a threat to global growth. Buried in the last paragraph of the communiqué issued at the conclusion of the summit was an agreement to put the issue on the agenda of the organization’s next meeting. “We agree that attention should be given to global health risks, such as antimicrobial resistance, infectious disease threats, and weak health systems,” read the communiqué. “These can significantly impact growth and stability.”

This is an important development. The G-20 would be an ideal forum in which to take international action against antimicrobial resistance. The countries most at risk from the problem include Brazil, Russia, India, and China (the BRICs), none of which is a G-7 member. These countries are also among those most likely to find solutions to the challenge. Furthermore, the attendees at the G-20’s summits include heads of state and economic ministers, without whom no solution can be implemented. 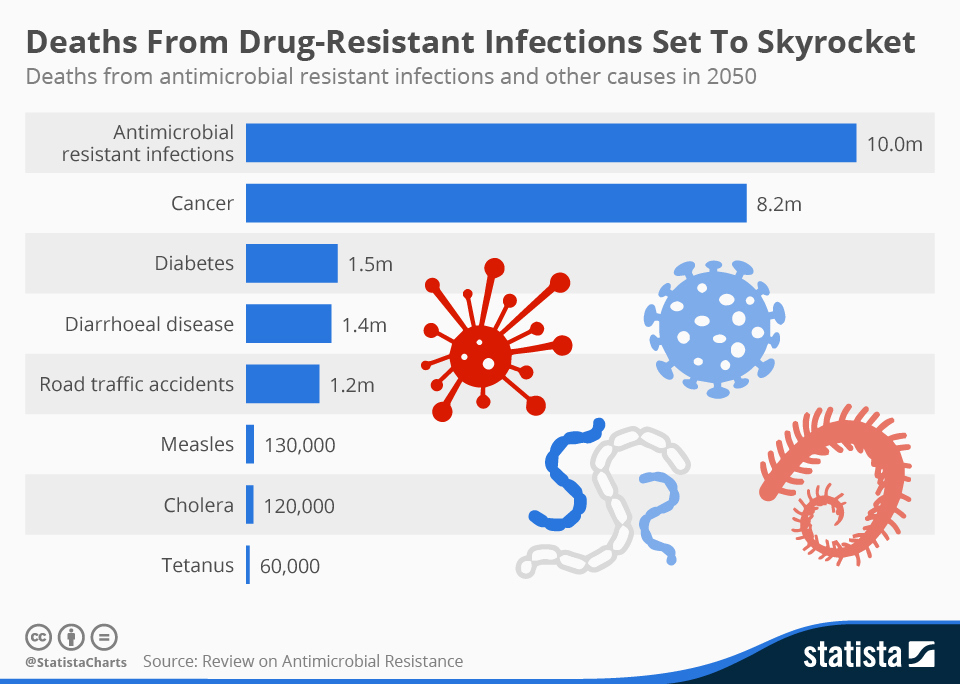 The commitment by the G-20 is just one example of the momentum gathering around the issue. In October, G-7 health ministers committed their countries to help combat antimicrobial resistance. The problem was also discussed by British Prime Minister David Cameron, Chancellor George Osborne, and their counterparts from India, China, and Brazil. A number of leaders, including Cameron, German Chancellor Angela Merkel, US President Barack Obama, and, most recently, Indian Prime Minister Narendra Modi, have made personal commitments to address the issue.

Growing recognition of the gravity of the threat is an opportunity that must not be lost. Part of the war has already been won. We know what must be done to address the challenge, and much is already being accomplished. More people are being encouraged to wash their hands to minimize the spread of infections. Major campaigns are underway to alert people to the risk that antimicrobial resistance poses to their health and wealth. And we are improving the surveillance of superbugs, as we learn more about the dangers they pose to humans and animals. The United Kingdom, for example, has committed $300 million to support microbiology surveillance capacity in developing countries.

Specific steps have also been proposed to speed up the adoption of state-of-the-art diagnostics in hospitals, clinics, pharmacies, and homes, so that the unnecessary use of antibiotics can be reduced. And we have also begun to combat the misuse of antibiotics in agriculture. Indeed, there are encouraging signs that leading US-based food manufacturers are changing their operations in response to consumer pressure. This could be the start of a big shift.

Meanwhile, pharmaceutical companies and government agencies are gaining a better understanding of the role that vaccines and alternative therapies could play in reducing anti-microbial resistance. And we are starting to prioritize the development of new drugs – as well as redoubling efforts to extend the lifespans of existing treatments. In October, the UK and China agreed to establish a global research and development fund, with the aim of attracting £1 billion ($1.5 billion) in investment in research to reduce the spread of antimicrobial resistance.

The biggest question that remains to be addressed is how to divide the cost among governments, the pharmaceutical industry, health systems, development agencies, and large charitable foundations. This is where the focus of the discussion needs to be now.

Fortunately, tackling the problem need not break the bank. Ensuring that future generations have access to effective antimicrobial treatments will cost little compared to other global challenges. We estimate that market-entry rewards for about 15 new drugs would cost $16-35 billion over ten years. This is a small price to pay relative to the estimated $100 trillion in lost global economic output if we do not act.

Finding about $2 billion a year over ten years to stop the return of infectious diseases is well within the means of the world’s 20 richest countries or 20 of its largest pharmaceutical companies. If they joined forces to fund a solution, the cost would be a rounding error in their bottom lines. But, given the size of the returns, it would be one of the wisest investments that they – or anyone – could make.

Have you read?
Are we on the brink of a post-antibiotic world?
How can we manage antibiotics sustainably?
How new antibiotics are being discovered

Author: Jim O’Neill is Commercial Secretary to the UK Treasury.

Image: Pharmaceutical tablets and capsules in foil strips are arranged on a table in this picture illustration. REUTERS/Srdjan Zivulovic.