Let’s not wait a century: 3 ways to close the gender gap now

Last year, the World Economic Forum released an unsettling report: based on current trends, it would be another 81 years before women achieved economic equality in the workplace. Like most people, I was very troubled by these findings. After all, four decades means four more generations of unequal paychecks and unequal boardrooms. It means my college-aged daughter – and the women of her generation – would spend their entire lives working at a disadvantage.

Last month, the news actually got worse – far worse. According to the Forum’s latest findings, that estimate is now 118 years. The oldest woman on earth isn’t even that old. (Her name is Susannah Mushatt Jones; she’s 116, and her parents were share farmers.) Based on this estimate, by the time women achieve workplace parity, in the year 2133, my great-granddaughter could well be a great-grandmother—and neither will have seen global gender parity.

As the father of a pretty outstanding young woman, I look at these findings and I am concerned. As a CEO, I see a cause for action. 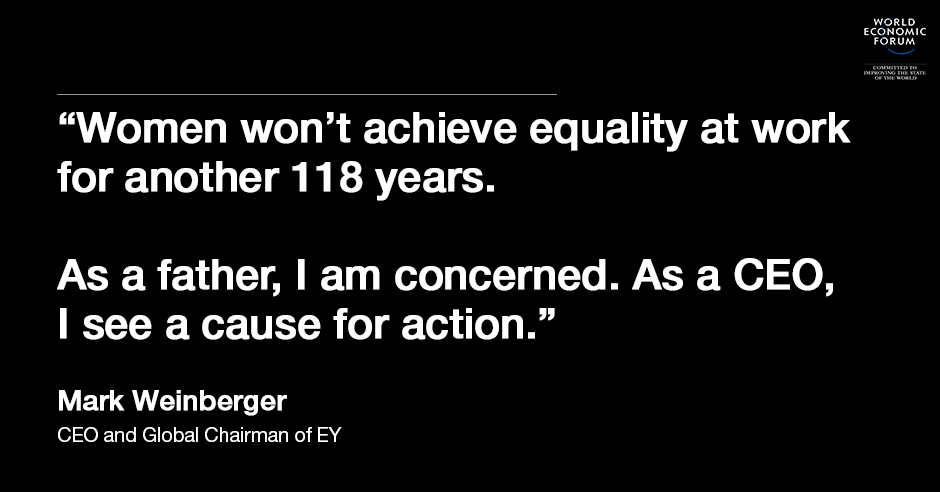 A trillion dollars of wasted potential

Study after study confirms that empowering women in the workplace isn’t just the right thing to do – it’s the smart thing for business. In a recent EY study, for example, 64% of high-performing companies reported that men and women have equal influence on strategy in their organizations, compared with only 43% of the lower-performing companies. Many other well-known global organizations have issued studies showing similar outcomes – including increased profitability, ROI and innovation – when women are counted among senior leadership.

Enabling women also boosts the economy: one report estimates that closing the gender gap could raise U.S. GDP by 9% – that’s over a trillion dollars. Other countries would see similar spikes in growth.

At EY, we’re on our own journey to close the gender gap. Part of that means being honest with ourselves about where we’re making progress, where we’re still falling short and what we can do about it.

Half of the college graduates we hire are women, but our global board is only 28% women and only 19% of our partners are women. We are making a concerted effort to improve that – this year 31% of our new partners were women – but we know we have much more work to do, and we’re committed to doing it.

To that end, EY recently surveyed leaders from 400 companies around the world on the topic of gender inequality. We combined their insights with our experience to create three actionable steps for any company that wants to level the playing field:

First, become a sponsor and encourage more senior male leaders to do the same. Sponsors can help open doors for potential female leaders to valuable assignments and connections and make a difference by providing support and believing in them. It’s important that today’s leaders counteract the natural tendency to turn to the people they feel most comfortable with – most often someone like themselves. Sponsors can help by ensuring potential hiring managers are better informed of high-achieving female team members.

Second, create a culture of inclusion. Culture is the key word here; it cannot be an initiative that’s off to the side of your organization. It has to be truly rooted in the way people think about their work and your company.  In part, that means offering real workplace flexibility, including generous maternity and paternity leave. But don’t stop there. It’s just as important to encourage your employees to use them. Make sure there’s no stigma for anyone who wants to take advantage of these benefits, or expectation that only women should. After all, as I said at the White House Summit on Working Families, women don’t want to be singled out, and men don’t want to be left out.

Third, look at your entire pipeline. It’s important to support and promote women into top leadership, but it’s equally important to look at this issue at all levels of your organization. If women don’t get the right opportunities and support at the beginning and middle of the careers, their chances of making it into the top roles are even lower. So build a real culture of support at all levels, and it will pay off throughout your organization.

The key word in all these steps is “actionable.” Every business leader is in a position to act now to optimize his or her full workforce by making gender parity a reality – faster. And EY is no exception; we are on our own journey with more work to do. But as businesses around the world continue on this journey, think of it this way: we would never wait 118 years to adopt any other business opportunity with so much potential. Let’s not wait on this one.

Image: Employees are shown in their working environment at the new headquarters of Facebook in Menlo Park, California January 11, 2012. REUTERS/Robert Galbraith