We can expect more because countries have already taken a significant step in the right direction by submitting individual pledges to reduce greenhouse gas emissions.

But we must expect more because, with the ink barely dry on these plans, it’s clear they are not enough.

The verdict is unanimous: the intended national determined contributions (INDCs) will collectively fall short of what’s needed to prevent global temperatures rising by more than 2°C by the end of the century.

The most optimistic projections suggest that these combined promises – if fulfilled – will result in the world heating up by 2.7°C. Others suggest it will be more like 4°C.

Though these are improvements on the previous worst case 6.5°C warming predictions, this is not a compromise we can afford to accept. The 2°C goal is enshrined in world accords as the most the Earth can withstand before we witness catastrophic changes to sea levels, wildlife, food production and weather patterns. 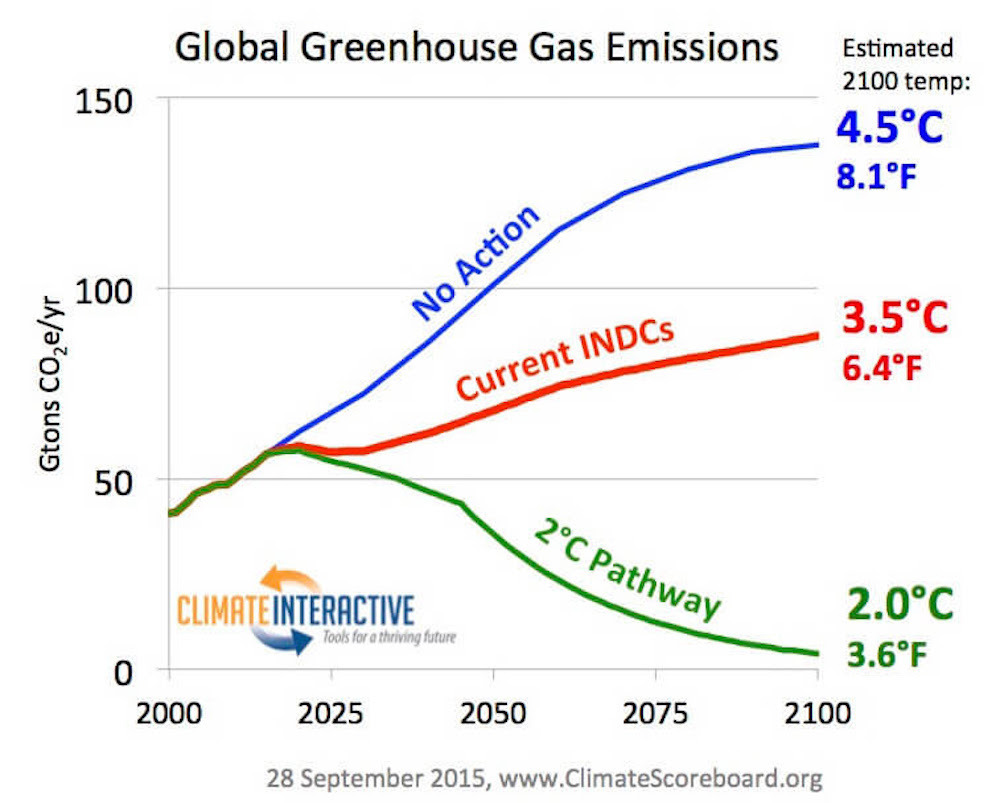 The weakness in self-determined targets is that nobody likes biting off more than they can chew. Many are still tied to the misconception that cutting carbon emissions and improving energy efficiency require sacrifice – either financially or in quality of life.

But this view could not be further from the truth. Energy efficiency represents a valuable opportunity with huge economic, social and environmental benefits waiting to be unlocked.

Research indicates that by making better use of technology available today, the world could double the rate of energy efficiency improvement – from around 1.5% to 3% per year. Doing so would reduce the global fossil fuel bill by more than $2 trillion by 2030, slash the average household energy bill by a third, and create more than 6 million jobs by the end of the decade.

The world consumes energy in three main areas, which account for nearly a third each: buildings, transport and industry. Of these, buildings take the biggest share, sapping 31% of all energy produced annually.

This is where some of the greatest gains can be made and the secret to improving energy efficiency here is two-fold.

We can all clearly do better on this first point, but new buildings and appliances like washing machines and light bulbs are much more efficient than the ones they replace, so we are at least heading in the right direction.

However, appliances are scrapped more often than old buildings, so the second and biggest challenge lies in accelerating energy efficiency upgrades and renovation for existing properties and infrastructure. Historically, this has been low on people’s priority lists – the scale of the initial investment is often seen to outweigh the long-term cost savings.

Regulation and financial incentives may help break down some of the barriers but an immediate shift in mind-set is fundamental to success.

Lighting is one of the easiest places to start. It accounts for 19% of all electricity used globally as we cling to outdated, inefficient systems. But a universal switch across the world to LED lighting would shrink this figure to 11%.

At a household level, making the switch to LED is a straightforward choice  But, while the contributions of every household are important, the biggest gains hinge on the decisions of governments, policy-makers, businesses and other large organizations. And, given their scale, cities hold the key.

There are around 300 million street lights around the world – most of them in cities – and yet only about 10% are LEDs. Switching from conventional street lighting to LEDs is only the first step. By connecting LEDs to sensors and enabling remote management – providing light on demand – energy savings of up to 80% can be achieved. Yet a paltry 1% of the world’s street lights are currently connected.

Los Angeles has recently gone down this route, becoming the first city in the world to control its street lighting through advanced management systems that uses mobile and cloud-based technology. By doing so, the city saves energy, reduces maintenance and provides quality light that makes streets safer for LA residents.

Projects like this must become the norm rather than the exception, if nations are to make meaningful energy efficiency improvements.

As delegates convene in Paris for COP21, world leaders must put a stake in the ground to drive faster, decisive action to combat climate change.

By refining business models and financing options governments, businesses and financial institutions working together can make switching to energy-efficient technologies easier for those that lack the funds upfront.

A move towards circular service models and incentives to stimulate shorter renovation cycles and upgrades would also mean that the best possible energy savings are realized as new technologies emerge.

A version of this article was originally published in Les Echos

How green corridors can enable the transition to zero-emission shipping