Where are Europe’s cross-border commuters?

Many workers rely on the Schengen agreement that allows them to cross the border without any ID controls. Almost 1.7 million residents from Schengen countries crossed the border to go to work in 2014. As can be seen in the chart below, 0.93% of the employed citizens living in Schengen countries work across the border. The share of cross-border commuters is particularly high in Slovakia (5.7%), Estonia (3.5%), Hungary (2.4%) and Belgium (2.3%). 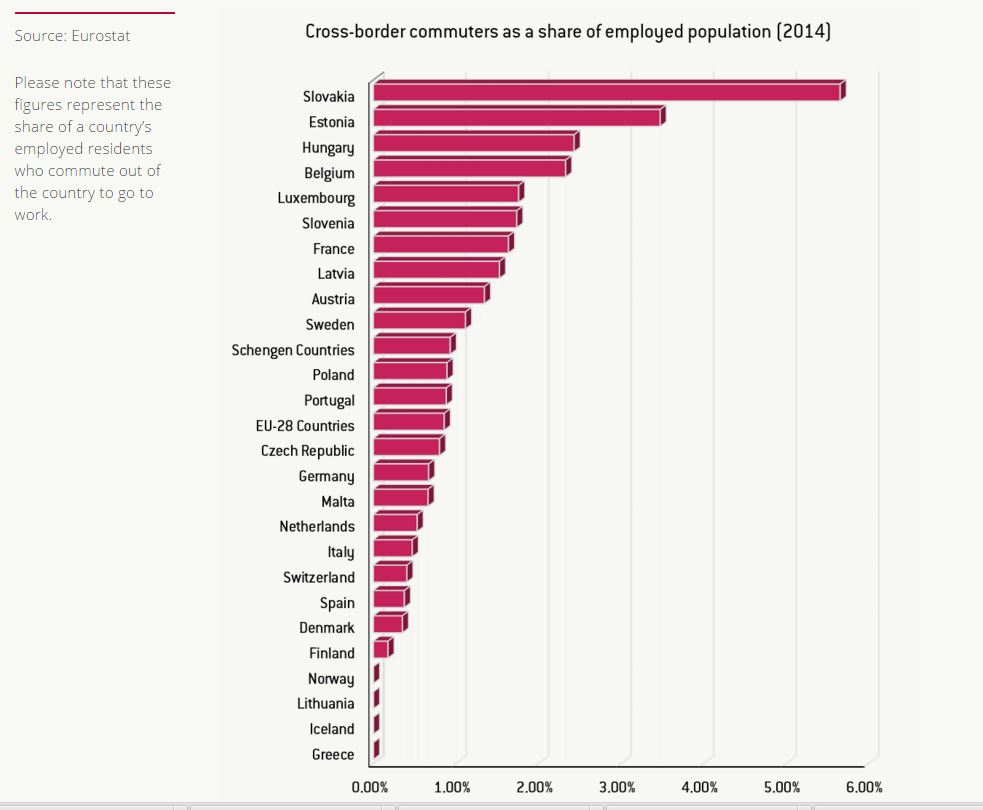 The Schengen agreement’s relevance stretches beyond cross-border commuting to work. In 2013, EU-28 citizens made over 218 million trips of one night and over to other EU-28 countries, almost 25 million (11%) of those were for business purposes. Overall, the numbers show that many people benefit from the Schengen agreement – they would notice its abolition in their daily lives. What makes the debate on Schengen so relevant are not the direct macroeconomic implications of its possible abolition, it’s the visible and powerful symbol of European integration that Schengen represents and the potential further consequences in terms of labour mobility.

Author: Nuria Boot works as a Research Assistant in the area of Competition Policy. Guntram Wolff is the Director of Bruegel.

Image: A businesswoman walks on the esplanade of La Defense, in the financial and business district in La Defense. REUTERS/Gonzalo Fuentes.

Car use is expected to become increasingly prevalent in Asia over the next 30 years, with large inequalities in infrastructure between rural and urban areas driving motorization.

Despite rising inflation and supply chain disruptions, the world’s consumers are on course to spend more this year during Black Friday and the end-of-year holiday shopping season.

Could autonomous trucks be the answer to the global supply chain crisis?

7 reasons why global transport is so hard to decarbonize

Here's how shipping can change course to hit emissions targets