Are levels of global violence falling?

Last year may be remembered for barrel bombs, beheadings and the Bataclan massacre, but according to a Harvard psychologist, a remarkable long term downward trend in violence is continuing. 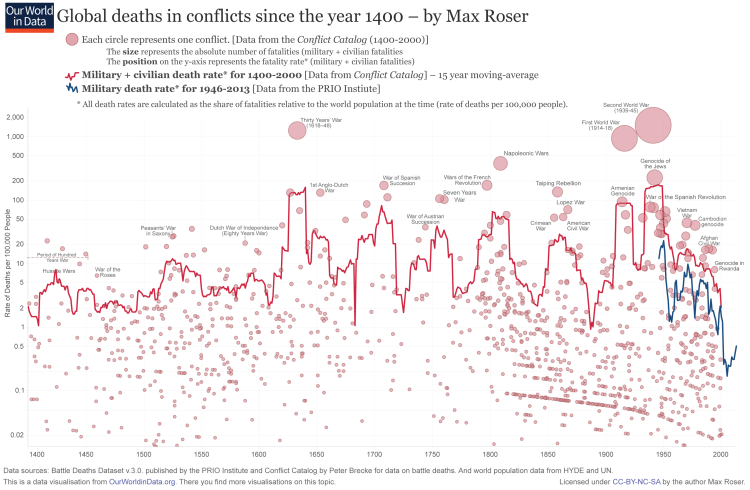 Wars are far less common and deadly than in the recent past, terrorism is rare, and the European refugee crisis is nothing new, said Steven Pinker, a bestselling science author.

“The news is a systematically misleading way to understand the world,” he told the Thomson Reuters Foundation in an interview.

In the past five years alone, conflicts have ended in Chad, Peru, Iran, India, Sri Lanka and Angola, and if peace talks currently underway in Colombia are a success, war will have vanished from the Western hemisphere, he said.

In his 2011 book “The Better Angels of Our Nature,” Pinker called the decline in violence “the most significant and least appreciated development in the history of our species”.

Compared to most of the postwar period, 2015 has been relatively peaceful, and dramatically so compared with earlier centuries. However, there has been a small uptick in violent deaths around the world over the past couple of years.

An end to war?

Citing data from the Uppsala Conflict Data Program in Sweden and the Peace Research Institute Oslo in Norway, which both count wartime deaths, Pinker says the long term trend is down.

Just as cannibalism and chattel slavery are mostly extinct in the modern world, it is possible that other forms of violence currently in decline, such as capital punishment and wars between states, could one day disappear, he said.

“For 500 years, Western European countries started two new wars a year; since World War Two the number has been zero,” he said – in recent years, most battle deaths were in civil wars.

Timothy Snyder, a historian at Yale University in the United States, who has criticised some of Pinker’s methods, is not as optimistic.

“A worry for the present and the future is that state collapse and global warming, separately or interacting, could end the exceptional period of peace to which we have grown accustomed,” he told the Thomson Reuters Foundation.

“If we think that peace is automatic, we are likely to be complacent about the factors that bring it about.”

But he says the geographical reach of wars is shrinking.

“Formerly wars spanned the globe, and there were 30 between 1945 and 1990 that killed 100,000 people or more, including wars in Greece, China, Mozambique, Algeria, Tibet, Guatemala, Uganda, and East Timor,” he said.

“With the exception of last year’s small wars in Ukraine, the zone of war has contracted to a crescent from central Africa through the Middle East into South Asia.”

In “Better Angels”, Pinker argues that almost every other kind of violence, including murders, capital punishment, domestic violence, torture and hunting, has also fallen sharply.

If it bleeds, it leads

Attacks of the kind that killed civilians in Paris, Ankara, California, Beirut and Garissa in Kenya this year are big news because they are rare, said Pinker.

“Rampage shootings generate a huge amount of media publicity but account for a relatively tiny number of deaths.

“That’s why the … rampage shooters carry them out – killing a few innocent people at once is the only surefire way to attract publicity for yourself or your cause.”

But attacking civilians in the name of a political cause is nothing new. In Europe, more were killed by Marxist, nationalist, and secessionist groups in the 1970s and 1980s than have been killed by Islamist militants in the 2000s and 2010s, according to Pinker’s research.

The psychologist also has a different perspective than most on Europe’s refugee crisis, which has seen more than one million refugees and migrants arrive in the European Union this year, almost half fleeing Syria’s brutal civil war.

Europe dealt with 60 million displaced people after the Second World War, about as many as the total number of people displaced around the world today, said Pinker.

Despite his reassuring take on 2015’s headlines, he is unwilling to make a bet on what 2016 will bring.

“Social scientists should never try to predict the future. We have enough trouble predicting the past.”

Image: A young local boy sits in front of weapons and ammunitions that were surrendered. REUTERS/Australian Army/Gary Ramage.