Is Africa winning the battle against corruption?

To the chagrin of most Africans, the world has long viewed their continent through the prism of the three “Cs” – conflict, contagion, and corruption.

Yet the first two are anything but general. Civil war is confined mainly to particular regions – for example, South Sudan or the Democratic Republic of Congo. And Ebola in West Africa spread more to Europe and the United States than to the rest of the continent. But the third, corruption, has been universal, blighting almost every country. 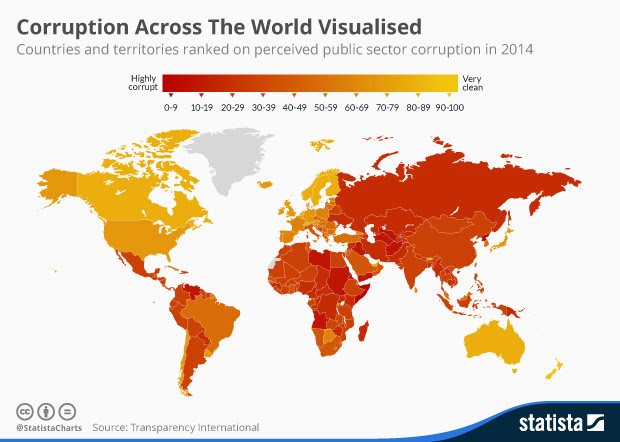 There are, however, encouraging glimmers of change. If they grow and spread, Africa’s fortunes could brighten considerably.

Begin in Rwanda. As President Paul Kagame advances a constitutional amendment to seek a third term in office, Western diplomats mutter darkly about the making of yet another African autocrat. Visit the place, however, and you find a thriving country.

In most of Africa, a traffic stop means a bribe; in Rwanda, both the officer and the motorist would land in jail. Government institutions work remarkably transparently, and the rule of law is real. One Saturday a month, Kagame and citizens alike turn out to sweep the streets – a metaphor not lost on the global anti-corruption watchdog Transparency International, which ranks Rwanda as Africa’s cleanest country.

Now consider Nigeria, the continent’s largest oil producer. By some estimates, previous rulers stole some 3% of the country’s GDP every year. Those billions of petro-dollars could have built a modern Nigeria of good roads, hospitals, and schools. Instead, the money went into a small elite’s mansions, cars, and foreign bank accounts.

Now a new president is rewriting the rules. Since taking office in May, Muhammadu Buhari (like Kagame, a former soldier) has launched a concerted offensive against high-level corruption. In November, two top officials were charged in a $2 billion scam to buy fighter jets, helicopters, and ammunition that were never delivered. In October, the former oil minister and the chief of the national petroleum company were arrested.

Suddenly, personal austerity is all the rage. Sales of Mercedes-Benzes and Rolls-Royces have tanked. Ostentatious luxury villas go unsold.

Whether such reforms can go deep enough to make a difference depends partly on whether they gain traction elsewhere. Here, too, there are propitious signs. The president of tiny Benin, also in West Africa, recently apologized after corrupt officials made off with a $4 million foreign grant. Senegal is mounting its own anti-corruption campaign. And nowhere is drawing as much attention than Tanzania, where newly elected President John Pombe Magufuli has set a rare standard for leadership.

In East Africa, where Twitter is popular, users are pressing their own governments to act with hashtags like #WhatWouldMagufuliDo? That question is most salient in Kenya, the face of a rising Africa – and the continent’s third most corrupt country, according to Transparency International, surpassed only by two near-failed states, Liberia and Sierra Leone

Every day brings sensational news of mind-boggling plunder: pens and photocopiers purchased at many multiples of their market price; millions paid out to bogus contractors for phantom services; and state industrial plants simply disappearing – stripped and sold off as scrap by their executives. Half of a recent $2.5 billion Eurobond issue has reportedly gone missing. Members of parliament, among the world’s highest paid, unabashedly pad expenses and take expensive junkets, while neutering government investigative agencies and prohibiting journalists from casting lawmakers in a bad light.

The good news is that many of these revelations come from government inspectors and reformers bent on change. They have been encouraged by President Uhuru Kenyatta, who has launched Kenya’s most ambitious good-governance campaign ever.

In the last few weeks, Kenyatta, a son of Kenya’s first president, fired a third of his cabinet, in his own words, “to curb rampant corruption.” Police have raided senior officials’ houses, confiscating bags of cash in at least one instance, and the government has set reference prices for public procurement, established special corruption courts, and instituted so-called “lifestyle” audits of leading officeholders.

Kenyans are skeptical. Corruption is too endemic, and the criminal cartels are too powerful, for brave talk to make a dent. Yet progress must start somewhere, and now is the moment for Kenya’s international friends to step up.

In July, US President Barack Obama signed a pact to help Kenya in its war on corruption. As with bilateral cooperation to fight terrorism, the pact focuses on illicit financial flows, in addition to the recovery of stolen assets. The US has since imposed an entry ban on an unspecified number of public officials. European countries should follow suit, in Kenya and elsewhere.

Nigeria’s President Buhari has urged the international community to crack down on the safe havens where corrupt leaders stash stolen wealth. Freezing the foreign holdings of officials under investigation would be a big step. So would local confiscation of purloined assets. Kenya is expected to do so soon.

Most important is ending the culture of impunity. A forthcoming survey of Kenyan youth conducted by the East African Institute at Aga Khan University found a startling “integrity deficit.” Half of the respondents believe that how one earns money is irrelevant, and a third said they would readily give or take a bribe. Three-quarters would not report corruption, fearing retribution.

Changing that mindset is crucial. Corruption will never be wiped out in Africa or anywhere else. But it should be an aberration, not an absolute.

Author: Michael Meyer, a former communications director for UN Secretary-General Ban Ki-moon, is Dean of the Graduate School of Media and Communications at Aga Khan University in Nairobi.

Image: A Rwandan police man stands next to pupils while securing the area. REUTERS/Tobias Schwarz.

Just 2.5% of the 6.4 billion vaccine doses administered globally, have been in given Africa, despite the continent making up 17% of the world’s population.

On the road to recovery: How Sudan is saving its water sector

Scientists sound the alarm over drought in East Africa: What must happen next