My 30 years of being out and proud in leadership

What a difference 30 years makes.

With some countries legalizing same-sex marriage, more prominent out public-figures, and the Gen X/Y crowd leading the way in acceptance and tolerance, it’s clear that times are changing for lesbian, gay, bisexual and transgender (LGBT) people.

But for many LGBT people across the world, homophobia, fear and hate remains a daily reality. Many in the global business community have been leading by example – including Microsoft – but more work remains to ensure that, as written in the Universal Declaration of Human Rights, “the inherent dignity and …equal and inalienable rights of all members of the human family,” are realized.

I would like share my personal story – my personal journey, really. That means going back 30 years to 1985 when I was living in Houston, Texas and leading State Government and Community Affairs for a Fortune 500 oil and natural gas company.

Things were happening in Houston. The local economy was booming and the city had just elected a woman as mayor. The mayor was a whip-smart visionary who recognized the economic and business value of diversity and inclusion. She drove a progressive policy agenda through the city council, including an ordinance to end discrimination in the hiring of Houston city employees based on their sexual orientation. Forward-looking members of the Houston City Council shared the Mayor’s vision and adopted the ordinance.

However, this being Houston in 1985, a number of the city’s so-called business leaders came together to lead a referendum effort to overturn the Council’s vote.

Gay by night, straight by day

At the time I was gay by night but straight by day, which is a recipe for hours on a therapist’s couch! I was solely focused on climbing the corporate ladder and nothing was going to get in my way, not even my true self. So one day I nodded quiet approval during a meeting as the Chairman and other senior executives discussed the financial support the company would provide to the repeal effort. I remember that meeting as if it were yesterday. Their jokes, hatred and fear that Houston would become “another San Francisco”.

That day was a turning point in my life. I was torn apart emotionally and so tired of hiding who I really was. That evening I called the equality campaign and began raising money for the campaign by passing baskets around one of the city’s gay bars asking for campaign donations. I volunteered that night and most nights until election day by fundraising, phone banking and door-to-door campaigning.

Sadly, homophobia and fear prevailed on election day and the non-discrimination ordinance was repealed. 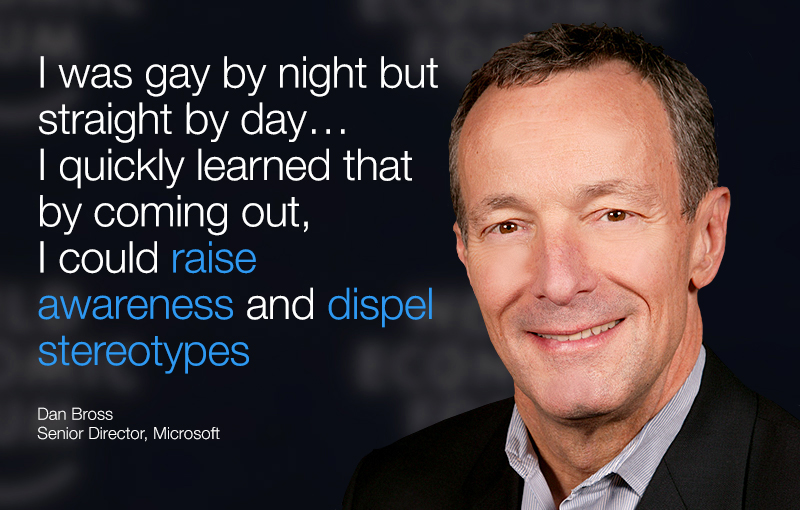 “You’ll never get another job in corporate America”

A few months after the meeting with the Chairman and other senior executives, I left the company to spend the next ten years working in the LGBT and HIV/AIDS communities in California; Washington, DC; and New York.

The HIV/AIDS crisis was running rampant. By living my life’s lie in Houston, I realized I was contributing to the fear, ignorance and discrimination because there was scarce understanding within many corporations that members of the LGBT community were significant contributors to their bottom line as employees, consumers, investors and more. I quickly learned that by coming out, I could help to raise awareness and dispel stereotypes.

Before leaving the company I told a friend about my plans and he said, “Well, good luck, but you better realize you will never get another job in corporate America if you work on ‘those issues’.”.

In a way, he was right. I never did get a job in the same corporate America which I left behind in Houston.

In November 2015, I celebrated my 17th anniversary at Microsoft where I am senior director for Business and Corporate Responsibility. This position gives me the opportunity to work internally across Microsoft business groups and externally with a wide range of stakeholders on a number of issues – including human rights.

I also have the privilege of serving alongside my terrific co-chair Cynthia Per-Lee as Executive Sponsor of GLEAM, Gay and Lesbian Employees at Microsoft.

When I was hired in 1998 Microsoft valued not only my experience and background but also who I was as a person – an openly gay man proud of the LGBT and HIV/AIDS work I had done for over a decade.

Microsoft’s commitment to diversity and inclusion did not start when I joined the company. In 1993, Microsoft became the first Fortune 500 company to provide same-sex domestic partnership benefits and Microsoft was also one of the first companies to include sexual orientation in its corporate non-discrimination policy. We have a long and proud history of adopting forward-looking global policies based on our commitment to equality for all.

During Davos 2015, my colleague Beth Brooke-Marciniak, Global Vice Chair of Public Policy at EY, and I had the honor of hosting a meeting of a large number of global companies to discuss our collective commitments to LGBT equality. Since last year’s discussion there have been tremendous gains made in LGBT inclusion, non-discrimination and equality.

In 2015 alone, same-sex marriage became legally recognized in Luxembourg, Slovenia, Ireland, and the United States. But this progress is not represented evenly across the globe. Many countries and even some US states still have no laws against discrimination based on sexual orientation and gender identity. In a number of countries, homosexual relationships and expression is still considered a crime, even punishable by death, and restrictions against activities including adoption, gender reassignment surgery, and military service continue.

This is why the discussions we will be having on LGBT issues in Davos later this month are so important. Thought-leading companies working in partnership with civil society organizations, government leaders, members of the faith community, human rights organizations, investors and others have the opportunity and responsibility to shine a bright light on the business and social value of diversity and inclusion.

At Microsoft, we believe diversity is a pre-requisite for success. It helps drive our business and our bottom line. Our ability to create technology that empowers every person and every organization on the planet to achieve more can only be achieved thanks to our employees and by supporting them to achieve more.

I left a homophobic and transphobic environment to be who I was, and I know this made me able to achieve so much more.

This is the first in a series of views on LGBT rights we’ll be publishing this week. Follow our Agenda in Focus collection here, and feel free to use the comment box to share your thoughts.

Image: The shadow of an umbrella is cast on the ground during the annual gay pride parade in Budapest June 18, 2011. REUTERS/Laszlo Balogh