Which degrees give the best financial return?

If you had a university degree back in 1972, you were likely to earn 20% more than those without one. Today, that number has soared to 70%. But not all degrees will give you the same return.

A report from Payscale shows that engineering and computer science graduates see the biggest return on investment. Those degrees will get you an average annual return of 12% over 20 years. The S&P 500, in comparison, will only get you 7.8%. Another big advantage of engineering is that, according to the data, you don’t need to have attended a top university to reap the benefits: graduates from less-selective schools only experienced a minor dip in their return on investment.

The Economist used this data to produce this chart showing which degrees get you the biggest bang for your buck: 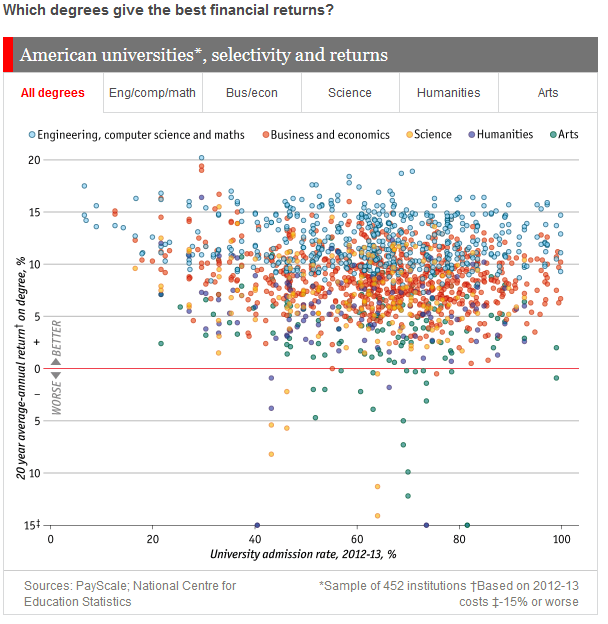 The report, which looks at data from the United States, also highlights the widening gap between Americans and their European counterparts when it comes to decision-making related to their education and careers. While the authors of the report point out that students shouldn’t base their decisions as to what to study solely on the money they’re likely to earn in the future, they do recognize that “we currently have 18-year-olds signing on the dotted line for student loans they’re not even certain they can pay back”.

In Europe, some countries have decided to go the opposite way to the US model. Germany made headlines last year when it returned to a tuition-free system. By eliminating student debt before it is even created, the hope is that young graduates will begin to see a return on their (time) investment almost immediately.

The United States is widely recognized as a leader when it come to quality higher education: for example, its education system was ranked six of 140 countries in the Global Competitiveness Report 2015-16. But the sometimes high cost of accessing this education could be starting to affect the economy at large, as Janet Yellen, chairwoman of the Federal Reserve, has pointed out: “Millennials are certainly waiting longer to buy houses, to get married. They have a lot of student debt. They seem quite worried about housing as an investment. They’ve had a tough time in the job market.”

Have you read?
The 50 best business schools in the world
Which US colleges are most likely to boost students’ future salaries?
Which is the world’s best university?

Image: Profile of students taking their seats for the diploma ceremony at Harvard University in Cambridge REUTERS/Brian Snyder

Nearly 90% of college students in the U.S. believe that colleges and universities are facing a mental health crisis, exacerbated by effects of COVID-19.