Why do so many Americans lack bank accounts?

Many households in the US do not hold a bank account, making it harder for them to accumulate savings, and the alternative financial services which they largely use tend to charge very high fees. There is an urgent need to identify the drivers of the unbanked phenomenon.

One of the main questions is whether being unbanked is driven by supply- or demand-side factors (see, for example, Barr and Blank 2008). The ‘demand-side’ view attributes the unbanked phenomenon to cultural determinants – the poor may distrust financial institutions or may not have culture of saving – or to a lack of financial literacy.

Alternatively, the ‘supply-side’ view suggests that standard bank practices create hurdles for the poor. Minimum account balances, overdraft fees, a large distance between branches and the proliferation of formal steps to open an account result in costs that may be too high for poor households to manage (Washington 2006, Barr and Blank 2008).

These two radically different explanations have different policy implications. While the demand-side view predicts interventions at the household level through financial literacy programmes, for example, the supply-side view suggests that banking regulation, by giving banks incentives to change their behaviour, may reduce the share of unbanked households.

In a recent paper (Célérier and Matray 2014), we provide evidence that supply-side factors significantly drive the share of unbanked households among low-income groups. We use the staggered interstate branching deregulation in the US after 1994 as an exogenous shock on bank competition.

In 1994, the Interstate Banking and Branching Efficiency Act (IBBEA), also known as the Riegel-Neal Act, allowed nationwide acquisition of banks across state lines, thus increasing the competitive pressure from out-of-state banks. However, states were allowed to erect four barriers to the entry of out-of-state banks. Over time, these barriers have been progressively relaxed across states, which led to a gradual re-shaping of the competitive environment of the banking industry.

Figure 1. Effect of banking deregulation of probability to hold a bank account 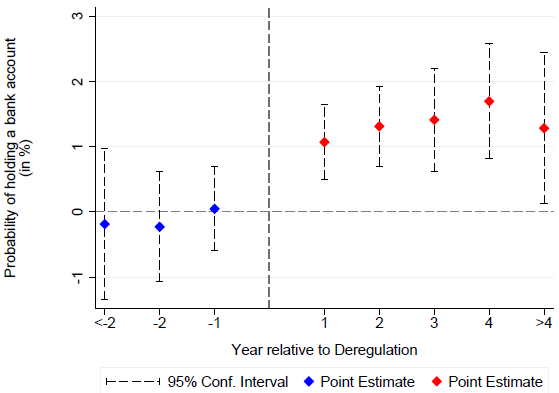 Who benefits the most from the increase in competition?

We find that the effect of banking deregulation on the share of unbanked households is heterogeneous across household types. Households that are more likely to be rationed by the bank, such as lower-income households or households living in rural areas, benefit more from intensified bank competition. We also find a larger impact for educated households, for which being unbanked is more likely to be driven by bank practices than by a low financial sophistication. Second, we find that intensified bank competition significantly reduces the white-black gap in access to bank accounts. For the same level of income, black households are 20% less likely than white households to hold a bank account in states with a history of discrimination, but this gap narrows to only 15% after deregulation, to the level observed in states with no history of discrimination. This result suggests that banks may discriminate against black households. All these observations suggest that bank practices, rather than household behaviour, are largely responsible for the large share of unbanked households.

What are the implications for newly banked households?

After all, newly-banked households could open a bank account and just let a few dollars on it. However, we show that having access to bank accounts improves wealth accumulation. Deregulation increases the share of low-income households with interest-earning assets both in banks and in other financial institutions. Because we control for several income variables at the household level as well as state macroeconomic conditions, this result implies that for an equal amount of income, low-income households are more likely to accumulate wealth when they have access to bank accounts.

One may indeed fear that bank competition fosters ‘predatory lending’ and that bank accounts are only offered coupled with loan contracts. However, we find that deregulation strongly increases access to bank accounts regardless of whether the household takes a loan or not. Most importantly, owning a bank account improves access to credit without translating into higher ratios of debt to income.

We find evidence consistent with supply-side factors driving the large share of unbanked households. This result suggests that being unbanked is not only driven by cultural factors, preferences or low financial sophistication, but also by bank practices that tend to ration certain types of households.

Authors: Claire Célérier is an Assistant Professor in the Department of Banking and Finance, University of Zurich. Adrien Matray is a PhD candidate in Finance at HEC-Paris and Visiting Researcher at the Financial Markets Group at LSE.

Image: Piggy banks filled with money are displayed on a desk during a “Save our economy” campaign by Korea Saemaulundong Centre in Seoul April 7, 2009. REUTERS/Jo Yong-Hak

In a rapidly changing world, capital markets have a key role in allocating funds to companies shaping the economy and tackling issues such as climate change.