The report ranks 142 countries on their ability to close the gender gap – making sure women are not held back – in four key areas: health and survival, education, politics and economic equality.

Despite experiencing the biggest absolute improvement compared to 2013, the region stays at sixth position. 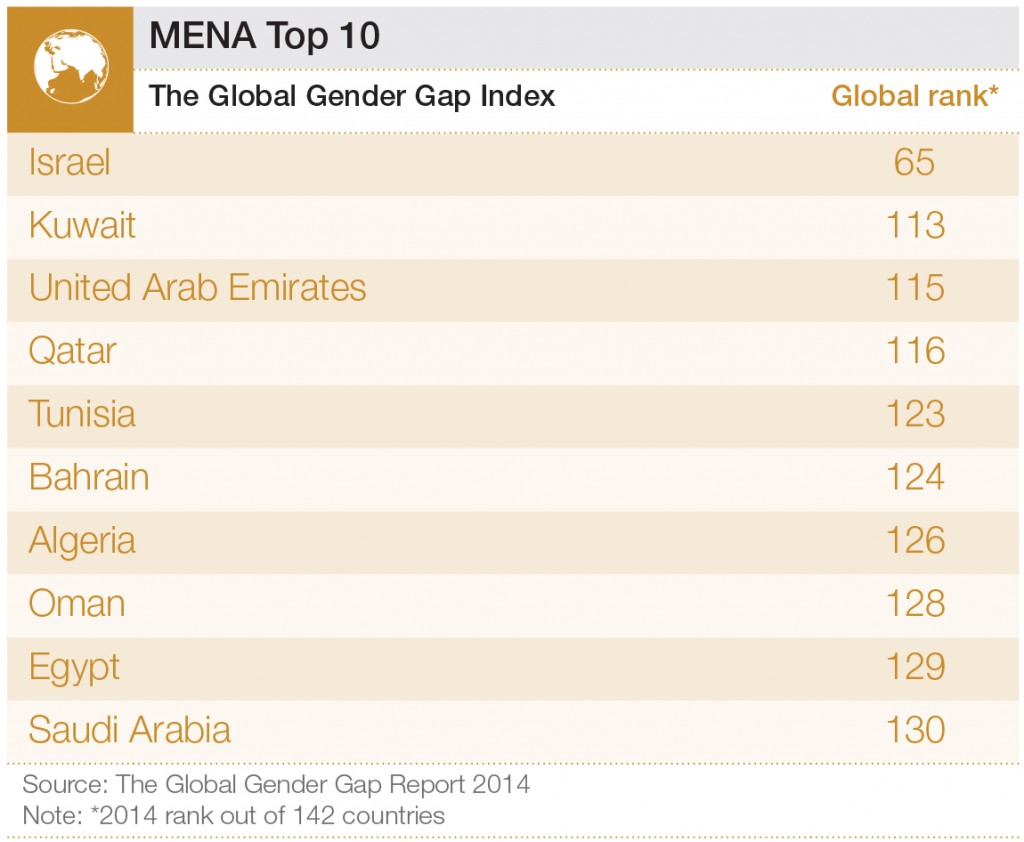 Israel (65 out of 142 countries) continues to hold the top spot in the region despite a decline in its overall score compared to last year; this is due to a fall in its score for economic participation and opportunity.

Kuwait (113) has become the top performing nation among Arab countries, due to an increase in the Estimated Earned Income indicator. Kuwait is among the three countries from the region that are above average in terms of economic participation and opportunity; but it is among the lowest performing countries for health and survival and political empowerment.

United Arab Emirates (115) Overall, in the last nine years, the country has closed just over 5% of its gender gap. It drops one place in the regional rankings compared to 2013.

Qatar (116) is among the three countries in the region that score above average for economic participation and opportunity; but it is also the third lowest scoring country overall for political empowerment, with no women in parliament; but it has the highest score overall for women in tertiary education.

Tunisia (123)  is one of only six countries that between 2006 and 2014, have regressed relative to their starting point. Along with several countries in the region, the tertiary enrolment rates for women are higher than those of men.

Bahrain (124) has fallen from 112th in the overall rankings since last year. Among those countries classed as high income, Bahrain remains one of lowest performing in terms of gender equality.

Algeria (126) Algeria scores highly in the region for political empowerment, due to the fact that 32% of its parliamentarians are women. It is, however, one of the ten lowest performing countries overall in terms of economic participation and opportunity.

Oman (128)  drops from 122th ranking overall last year and from seventh to eighth place regionally. It is also one of the lowest-scoring countries for political empowerment for women. Among high-income countries, Bahrain is one of lowest performing in terms of overall gender equality.

Egypt (129) The country’s overall score has improved steadily between 2006 to 2014 with, a slight decrease in 2013.  The country scores above average on both the educational attainment and health and survival criteria.  But it remains among the ten lowest performing countries overall for women’s political empowerment.

Saudi Arabia (130) continues to be ranked the lowest performing country among high-income countries, but is among the five countries with the highest percentage change relative to their own 2006 score.  It is one of four countries overall that have no female ministers. It is also the second-lowest performing country on the ability of women to rise to positions of enterprise leadership, just ahead of Angola.

Author: Saadia Zahidi is a Senior Director, Head of Gender Parity and Human Capital and Constituents at the World Economic Forum. She is a Founder and Co-Author of Global Gender Gap reports.

Image: Women sit at a table in the lounge section of the Burj Khalifa in Dubai. REUTERS/Jumana El-Heloueh

Establishing a new public health order is vital in Africa as weak health systems provide a breeding ground for the growth and spread of dangerous pathogens.