Four ways to change the way we lead

With each crisis that arises, there is often a temptation to make everything into a Hollywood script: these are the bad guys, these are the good guys and it’s a simple war of good against evil. But we know that humanity isn’t that simple. For power politics to work, countries must make decisions even when they don’t agree – and that takes a degree of understanding of the other side.

Over the last decade, the perceived failures of global governance have left us grappling for new solutions, and wondering whether we need to go back to basics. In the latest Survey on the Global Agenda, more than 8 in 10 said they believed new structures for global governance needed to be developed.

Even the international crises that have emerged in just the last 12 months, from the rise of Islamic State to Russia’s intervention in Ukraine, would suggest we are at a critical moment in global politics. The hegemony that in the past could be relied upon to maintain order is now thought to be receding, leaving emerging countries to make a play for strategic assets.

We’ve seen this happening before in the dying days of the Ottoman Empire, the Habsburg Empire, and after the First and Second World Wars, as old, great powers waned and new ones grew in influence. The shift in international power relationships that we are currently witnessing may be dramatic, but it certainly isn’t new. But how should the world respond now? Should a concert of great powers be intervening to declare to parties what they must and must not do? It’s difficult to see, in each of these current crises, how great powers can simply order the actors involved to act in particular ways. A different kind of local agreement is needed, whether it’s an agreement between Saudi Arabia and Iran on the shape of borders and government in the Middle East, or an agreement among Russia and its neighbours on where its borders should sit.

Aside from geostrategic conflicts, there are other problems that global governance must address. Health issues present a perennial challenge, as exemplified by the recent outbreak of Ebola – a global, infectious disease that requires neighbouring countries and others to cooperate to halt its spread, find a solution and prevent a panic. Finally, if we suffer another emerging market economic crisis, it will be extraordinarily damaging across their respective regions if an internationally coordinated response is not forthcoming.

Each of these crises reminds us why we need international cooperation. There are specific kinds of problems in our world that our leaders can only deal with if they can rely upon other nations to take certain actions.

The view from academia

Academics broadly view global governance in one of three ways. Some believe it’s all about power – having a hegemony or having a group of great powers. This is a very hierarchical view that says that international order work can only be maintained or restored if a great power, like the United States, is both willing and able to issue and carry out effective threats.

And a third view states that what countries think of as their interests is constructed by their history, society, religion and values so that cooperation is generated by how a community perceives itself, its duties and responsibilities. 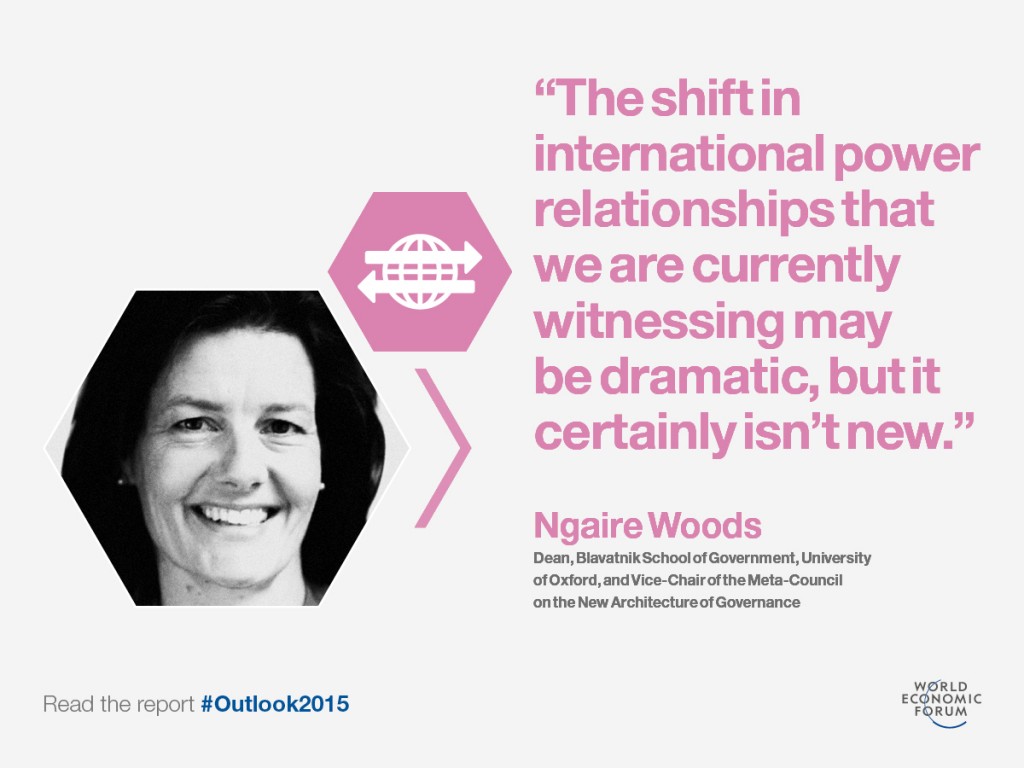 Those three perspectives have been around for centuries, but I think what we’re starting to see is people reverting very much to the first, power-based view – what people might call realpolitik. For example, although a very strong stance was taken a year ago against Bashar al-Assad, now the argument is that perhaps the United States should arm Syria so as to defeat the greater enemy of Islamic State. This is a clear example of realpolitik in practice.

If one lacks an understanding of the first perspective – the nature and working of power politics – the next two strategies will likely make little sense. The relationship formed by power creates a solid platform, allowing the establishment of mutual interests that can enable cooperation; these can then be correlated with these factors such as identity and cultural values. All three perspectives are important, therefore – but I believe that they must run in this order.

For too long it has been assumed that the discussions that take place among the G7 nations, or those between Europe and the United States, are the only important ones, the ones to which we should all listen. Clearly this is not the case.

China has progressed its own bilateral diplomacy. When it holds a summit for African leaders, it brings together all the African authorities in a way that the Europeans and Americans can’t achieve; we’re getting a new kind of great power politics involving the BRICS which looks very different, and does not always include the United States or Europe.

International cooperation and global governance is often viewed as the domain of the United Nations and the set of global institutions that were created almost 70 years ago. The Survey suggests four out of five respondents believe global governance structures are poorly implemented. Within the framework of the Global Agenda Council on Institutional Governance Systems, I have been leading a project assessing effective leadership in international organizations, which are often accused of being ineffectual. I believe there are two measures which could make these international organizations work more effectively.

Firstly, my belief is that these global institutions should narrow their focus while deepening their engagement. They should tackle only the serious, collective-action problems, and they need to tackle these with their full concentration. We need to put a stop to what I call mandate-itis. Every time there’s a problem in the world, the United Nations gets told to start reviewing it, reporting on it, and taking out a new mandate on it. Alternatively, you start with an organization that’s designed to do one thing, which subsequently ends being loaded up with all sorts of other mandates. It’s impossible to be effective in either situation, so instead, let’s focus on what we really need each international organization to do – and then let them do it.

The second measure is improving leadership. For the last 70 years, countries around the world have fought tooth and nail to have their candidates accepted as the leader of each international organization.

We’re watching this play out in the European Union at the moment. Is it Britain’s turn to have a European Commissioner? Is it Germany’s turn to have an IMF managing director? It’s the nationality politics of choosing leaders – and then once the leader is chosen, there’s a rather unfortunate habit of just ignoring everything that happens afterwards.

A really good, effective manager leader is not enough, on their own, to make an international organization work. You need a lot of other things as well – and yet if you do not have an effective manager leader at the top of an institution it’s never going to operate as well as it can. The problem we frequently face is that if the person proves to be incompetent or careless – or simply does not have the aptitude, experience or capacity to do the job – there’s very little that happens, unless there is a scandal, to change the leadership.

We need appointments to be determined by transparent, competitive processes but we also need our leaders to know that they will be held accountable by the whole community that elected them. If you know not only who appointed you, but who has the power to decide whether you are re-appointed for another term, even the most conscientious leaders going to have that in mind as they make key decisions.

The post-Second World War victors, who took up commanding positions in our international organizations, face a dilemma. None of them – the United States or Europe – wants to give up power today in order to ensure their interests tomorrow. The United States and the European Union have solidly refused to push forward further reforms in the International Monetary Fund (IMF) and World Bank for that very reason. No government wants to be the one that gave away a particular power, even though they all agree that it’s in their long-term interest to ensure that these institutions are effective. They realize that the only way they can be effective is if there is greater buy-in and greater representation from emerging powers.

We are seeing incremental change, but it is happening at a very slow pace. In the event of a major crisis, the former colonial powers and the United States have a reflex which is, “What should we do about this?” And I think the citizens of the affected countries quite often have a similar reaction, whether they’re arguing for or against intervention. There’s a presumption that there is a specific set of countries that can and should take action, but increasingly they need to ask is, “Who is it that can most effectively govern this situation in the long term? And how do we make that happen?”

Asking “What can I do?” is a good reaction to a crisis. But rather than always assuming that we must personally intervene and take credit and responsibility for the solution, the better response may instead be figuring out which other country or region is going to solve that problem, and then how could we support them.

Not every battle is ours to fight; sometimes it’s not even our role to coerce or cajole those who might need to take action. Sometimes we need to say, “Hold on, who is already taking action on this, and what are they doing? Are we getting in the way, or is that the wrong direction?” These are slightly differently framed questions to “What can I do?”, but ones we must ask if we are to learn how to be partners, in this new, more decentralized world.

Extracted from the Outlook on the Global Agenda 2015 report.

The Outlook on the Global agenda 2015 Report is now live.

Author: Ngaire Woods is Dean of the Blavatnik School of Government at the University of Oxford.

When should policymakers reach for the history books?

Catherine Schenk, Professor of Economic and Social History at the University of Oxford, looks at the role of history in informing policy responses.

Sida and UNCDF are working with regulators to harmonise different rules governing remittances and to create coherent frameworks to support this finance.

Global trade after COVID-19: From fixed capital to human capital

These countries are the world's top remittance recipients