Why are our daughters still trapped by sexist stereotypes?

My generation of American women stands accused of “wanting to have it all”.

As the story goes, we foolishly went into the workforce without making childcare provisions, thinking the whole way that we were superwomen who could handle anything, and ended by passing along to the next generation an impossible situation where children and professional life were out of balance. Now grim soldiers of a past revolution, we impose on the daughters of the world the notion that they, too, should kill themselves “having it all”.

That is not the way I remember what happened and I doubt many of my erstwhile comrades-in-arms remember it like that, either.

I got my MBA in 1978, a member of the first cohort to try and crack the gender barrier in management. I graduated with a cadre of other women so afraid they wouldn’t measure up that we all finished top of our class. We were snapped up by big companies across the US, not because they really wanted us, but because they feared reprisals from the federal government.

Though much is made today about how the United States failed to provide us with mandated maternity leave and free childcare, we were supported by two other conditions that many other nations still do not have in place: the affirmative action policy and the right to file a class action lawsuit. I believe these provisions made all the difference, though they did not create an easy path. 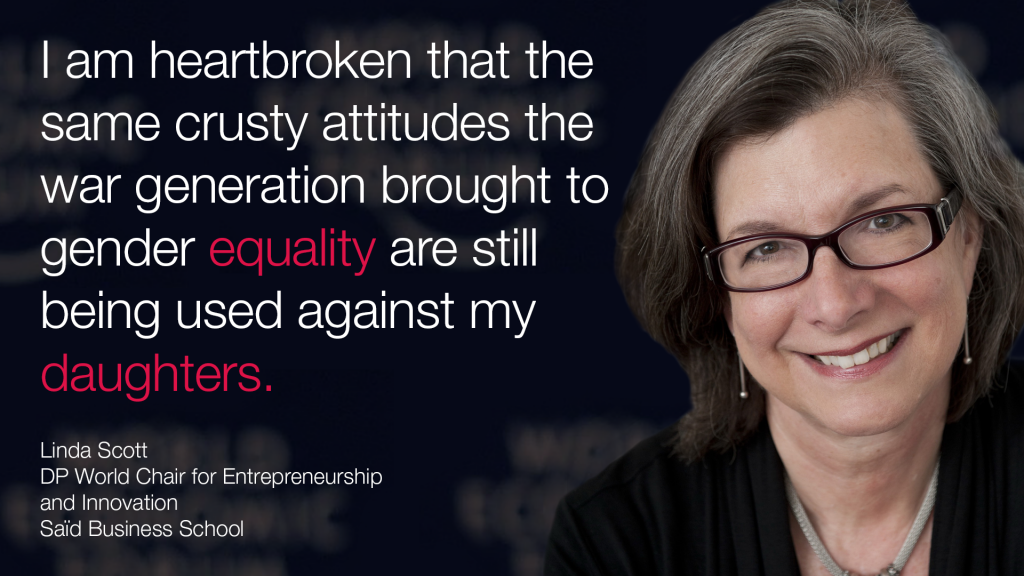 “Do the job like a man or go home”

The war generation men who were then the captains of American industry, a gender-unfriendly bunch if ever there was one, were deeply resentful of the coercion they sensed in the new national push to diversity. They begrudged us our jobs and made it very clear we would not be allowed to stay unless we could perform perfectly and without calling attention to the conditions of our gender, such as being expected to take care of children and clean homes. As for our families, most of us had little support from parents and in-laws, who thought we were silly to put ourselves through this ordeal if we “didn’t have to work”. Our husbands were better, but still expected the free maid service to continue uninterrupted if we were to be “allowed” this reckless and selfish quest.

We had two choices: shut up and do the job like a man or behave like women and go home where we belonged. Some of us chose to realize our education and become self-sufficient, two objectives that most today would see as basic rights. We dressed up as imitation men, hid our families from sight, careened home at the end of every day to fry the bacon, and just generally let our bosses and partners think they were still men in the unreformed way of that era’s beliefs. I don’t think any of us experienced those years as “having it all”, but there is no question we were doing it all.

Since the equality legislation enacted during the 1970s throughout North America and Western Europe, many policies and programmes have been adopted to assimilate women into the workforce and help them advance. There has been a particular focus on issues surrounding maternity: reproductive health benefits, maternity or parental leave, and various daycare offerings. During the 1990s, more European countries assumed the cost of such programmes, mandating leave and providing for daycare. Canada, the US and the UK put the burden on the private sector, a move that is often interpreted as a failure to provide for women.

Two leading economists, Francine Blau and Lawrence Kahn, compared the results of the European and English-speaking policy paths statistically, finding the practices in Europe had attracted women into the labour force, but warned that employers may have penalized them for the expense of the extra programmes. And, indeed, World Economic Forum data suggest that is exactly what happened. 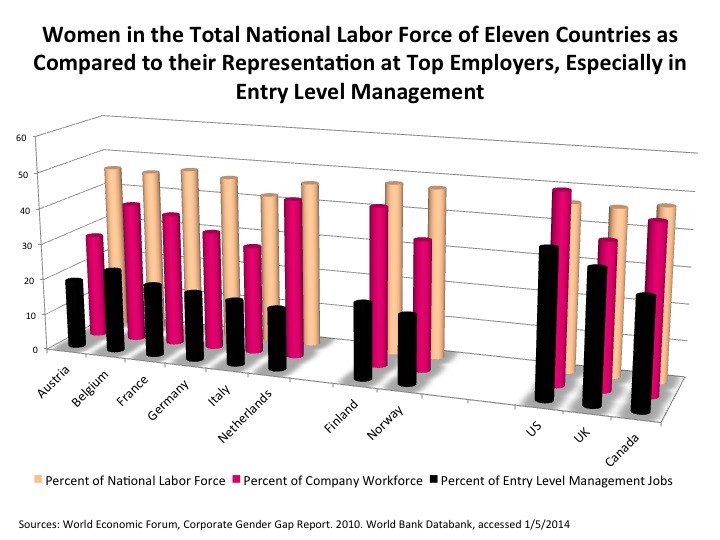 For their 2010 Corporate Gender Gap Report, the World Economic Forum surveyed the top 3,000 employers among OECD and BRIC countries. Human resource executives reported an impressive array of programmes aimed at promoting gender equality. However, they also reported that their companies hired fewer women than were present in the labour force at large – and even fewer females were given a shot at management jobs. This pattern was much more pronounced among the European countries than in the English-speaking group. Indeed, the US seems to be approaching parity, at least on these dimensions. Year after year, however, executives from all these countries tell the Global Gender Gap Report they pay women less for similar work.

Determining which of the many policies put in place over the past 50 years has been effective or detrimental is thus a complex task. However, the big picture, across nations, shows quite clearly that, despite half a century of effort, women are still hired less often, paid unequally, and seldom advance. The picture also shows that the economic and business case for better inclusion of females is strong, as is the moral case. Why are we, as an international community, failing at this challenge? 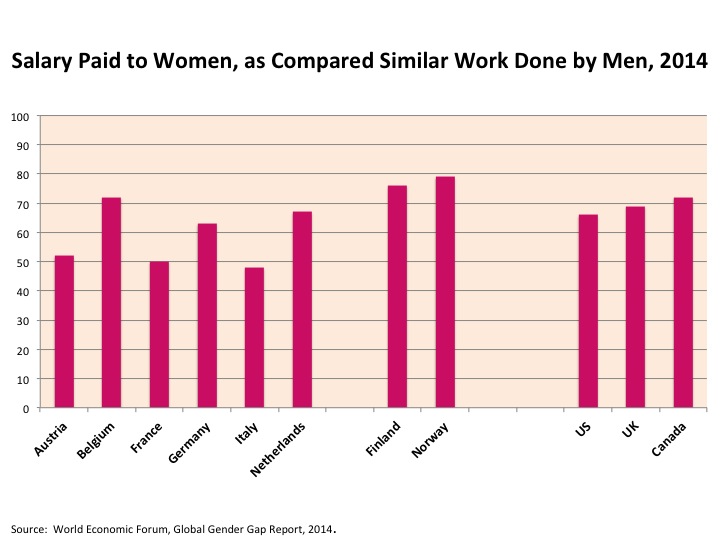 When asked what issues continued to be problematic as barriers for women’s advancement, the executives responding to the Corporate Gender Gap survey consistently put maternity leave and childcare near the bottom of the list. Indeed, they did not see many problems left at all, since most potentially contributing factors – lack of mentors, networks and role models, for instance – were rated below the mean as reasons to worry. Importantly, where these managers did see a problem, it was usually with the “masculine/patriarchal corporate culture” in which they worked or with the cultural attitudes in their country. Effective regulation came dead last as a problem, even though some nations, such as Britain and the US, were then reforming their equality legislation, as the provisions had proven unenforceable, inadequate, and, in some instances, such as the UK’s “positive discrimination” doctrine, counterproductive. 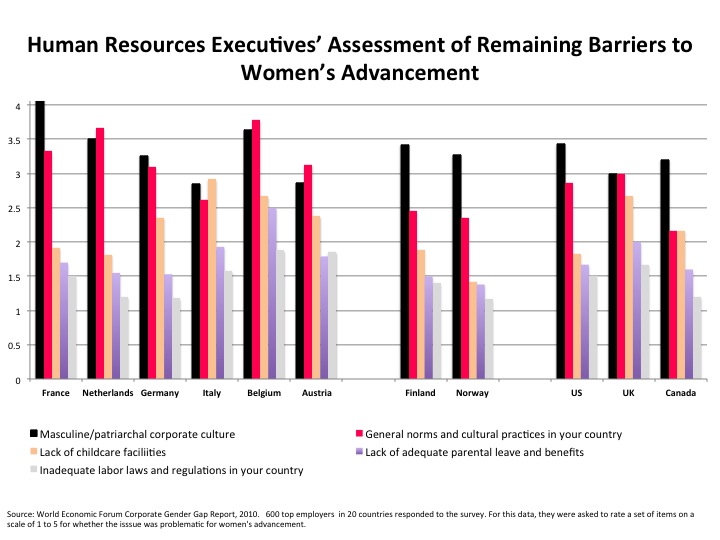 Using a large base of interviews conducted in organizations in several countries, academics Lynne Rosenberry and Johan Roos also found that managers saw gender inequality as a problem that either did not require or deserve further work. Their respondents, male and female, relied on a consistent set of gender stereotypes to justify inaction. These stereotypes clustered around two ideas: that women don’t really want to be leaders and that they “naturally” prefer to opt out of the workplace in favour of family. In these interviews, today’s all-hours workplace was normalized as the given environment for which men were best suited. Thus, the long-hours, high-stress workplace acts as a powerful enabler for continued gender inequality.

Women know this. A massive 2014 study undertaken by Opportunity Now in the UK asked 25,000 people, mostly women, about gender in the workplace. The Project 28-40 findings showed that women were keen to advance and become leaders; they felt they had the confidence and the skills to do a great job. Though maternity issues were a key concern, especially among the young, the overriding apprehension was the barrier presented by the same “masculine/patriarchal culture” that managers identified in the World Economic Forum survey. That array of masculinist attitudes and practices (an alarmingly high level of workplace bullying was reported, alongside the long hours pressure), so difficult to document, measure and change, is the real roadblock, according to these women.

Project 28-40 echoed the findings of other research, including a recent  report by the OECD, that provisions like parental leave and flex-time often merely reinforce the conservative gender ideology that says women don’t really want to work and should go home. And the quotes from respondents showed that the long hours culture had upped the negative pressure against women and was experienced, at the ground level, as emphatically masculine and exclusionary.

An ambitious undertaking by the European Institute for Gender Equality found that traditional gender stereotypes are very much alive in the day-to-day experiences of Europeans, thus presenting barriers to equality at work and at home. Personal narratives collected from 27 countries showed an astonishingly old-fashioned set of expectations – in which women were to stay home and be subordinate to males – was still operative in every aspect of women’s lives. Importantly, the men in the sample frequently said when first contacted that they had never given gender any thought and, therefore, could not offer much input. When they nevertheless came in for the interview, most opined that gender was completely unproblematic.

Finally, a report from McKinsey and Company concluded the “next frontier is toppling invisible barriers: mindsets widely held by managers, men and women alike, that are rarely acknowledged, but block the way.” The authors recommend a system of performance measures and diversity incentives to counteract the “silent, but potent beliefs” that made the chances for women’s advancement half those for men.

Official international analyses as well as in-depth studies arrive at the same conclusion: the real culprit in continuing gender inequality is a complex of old prejudices that use family as a justification for disadvantaging female workers. The requirement to work long hours without notice and irrespective of any real need is a key means by which these outdated attitudes are perpetuated and made painful. Such prejudices are invisible to many, “natural” to some, but are, in the end, harmful to all.

I am heartbroken and infuriated to see that the same crusty attitudes the war generation brought to the diversity question are still being used against my daughters and my students. The false retelling of my generation’s story as a parable of foolish ambition conveniently serves the hidden beliefs that still propel bad business behaviour. If true leaders would decide to step away from personal prejudice and instead pursue the equality goals we know are best for the whole species, the next generation’s story might have a happier ending.

Instead of waving our hands at an ineffective programme of support for women in the workplace – or playing to extremes by freezing human ova  – we all need to stop and search our souls. Given the compelling economic, business and moral case for gender equality, it is incumbent on the current generation of business leaders, such as those gathered this week at Davos, to leave their grandfathers’ beliefs behind and push more positively towards diversity.

Author: Linda Scott is DP World Chair for Entrepreneurship and Innovation at the Saïd Business School, University of Oxford. Her blog is The Double X Economy.

Research shows a majority of workers can do their job in less than 40 hours a week. So why are we still stuck in the same work week, even amid such radical shifts in the way we work over ...

5 ways to inject culture into a hybrid working model

'Zigzag working’: The alternating shift between paid and unpaid work for parents